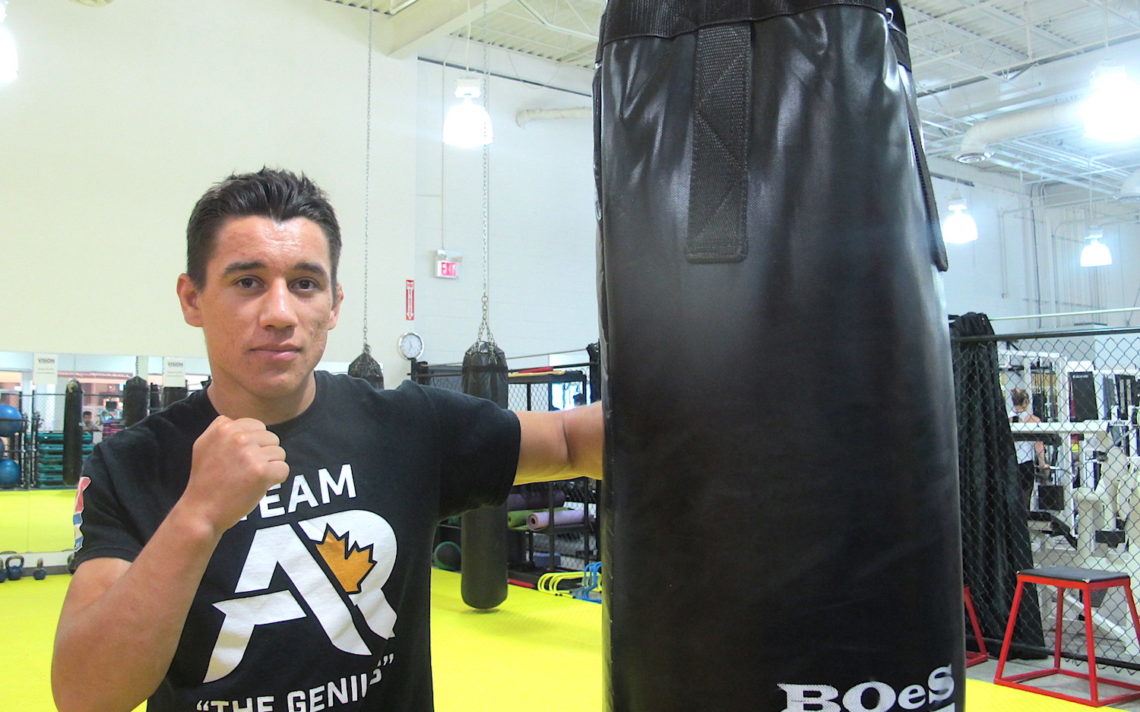 Fighting for his dream

Anthony Romero’s road to the world of ultimate fighting began at a young age.

The 21-year-old Welland native began Taekwondo as a method of self defence when he was only five years old.

“My parents wanted me to be able to defend myself,” he recalled. “I guess since I was a young kid I’ve liked challenges.”

He then quickly progressed to mixed martial arts, jiu jitsu, kick boxing, and by 11 had earned a black belt.

He then took things a step further and began boxing training at Napper’s Boxing Club in Welland.

“It came to a point when I branched out into other martial arts,” he said. “I thought of sticking to getting really good at that.”

That meant countless hours at Napper’s as well as time at Montreal’s Tri-Star Gym, where Georges St. Pierre is a member, as well as a club in Oakville.

Along the way Modern Vision MMA opened a club at the Seaway Mall and Romero quickly joined.

He now calls himself a mixed martial artist and has high aspirations of making it big.

“My goal is to get to the UFC. I always say I want to be a champion of the UFC, but I can’t make that goal until I make the UFC. Once I make it to UFC, then my goal will be to be champion,” he said.

To get there, Romero needs to continue to hone his craft and have as many fights against top quality competition as possible.

“I just have to keep winning and hope for the best,” he said. “In the UFC, you can win but if it’s not impressive then you don’t really get noticed.”

Romero said there are a couple of avenues that may get him fast-tracked to the UFC.

One is Dana White’s Looking for a Fight reality television program where he scouts fighters and another is a program called the Tuesday Night Contender series.

Romero is willing to do whatever it takes.

“It’s like anything. You need managers who know people and just winning,” he said. “Sometimes  you impress the boss and get right in.

“I would say three more fights and I would be close.”

Romero had a 9-1 record in 10 amateur fights. He turned pro last November and has a 2-0 record. Both fights were held at Seneca Casino in Niagara Falls, N.Y.

He is so close to his goal he can taste it.

“It’s amazing. It would be a dream come true,” he said.

He often gets questioned often why he chose this path in life.

“It doesn’t matter what it is. As long as you love it, you will be happy.”

Romero does admit he gets butterflies before a fight.

“I do get nervous, but over time you learn to deal with it and know you’re supposed to be nervous at that moment,” he said. “It’s a natural feeling. After, you’re just happy you did it and want to do it again.”

He said there is no rhyme or reason to how he will feel following a bout.

To help support himself, Romero teaches classes at Modern Vision and also works in programs at different schools and runs summer gym classes.

“It is super tough, especially in the early stages. You don’t get paid as much but in your mind you keep thinking about where you will be.”

He has been able to tap into some corporate support, including a partnership with The Blue Star Restaurant in Welland.

“They help me with gear, with trunks and gloves and sometimes feed me for free,” he said.

“I’m super proud and happy to represent the Blue Star.”

Romero’s parents, Rene and Caroline, have also been constant supporters.

“At first they were super nervous. When I’m in there they are just happy I am doing what I love to do and they don’t care if I win or lose. As long as I am safe.”

Welland sports stories are supported in part by The Blue Star. http://www.wellandbluestar.com