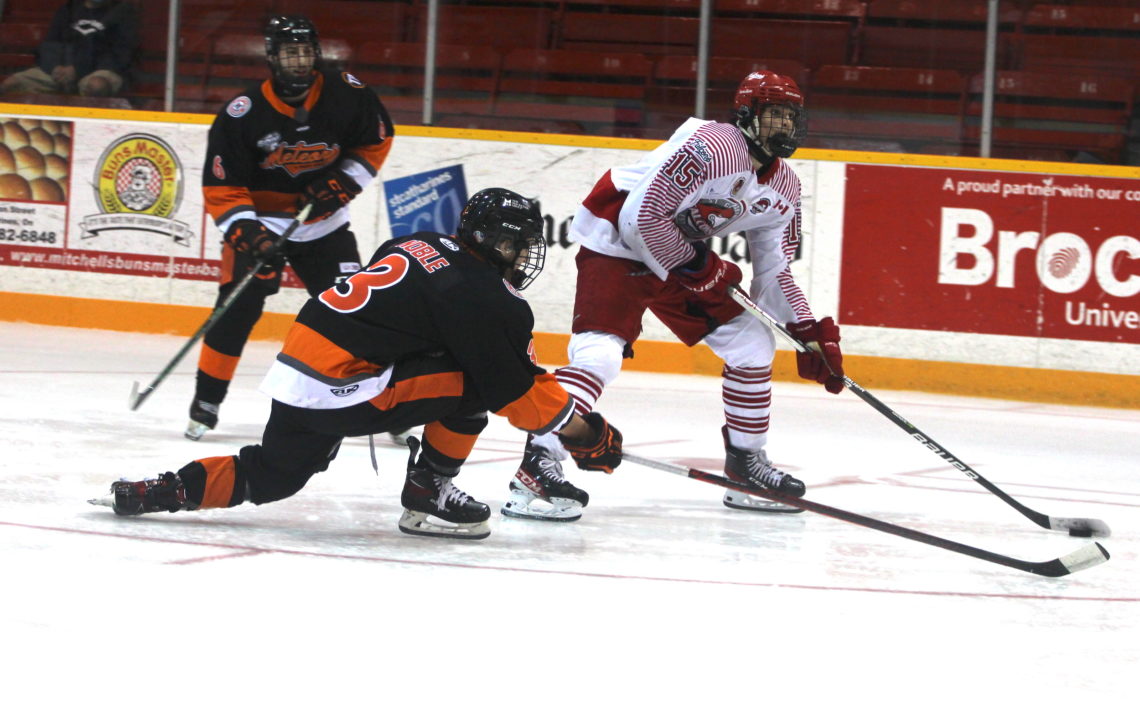 Falcons rookie puts on a show

Luca Testa, who turned only 15 earlier this month, collected two goals and an assist in his junior debut as the Falcons defeated the Fort Erie Meteors 4-0 in a Greater Ontario Junior Hockey League, Golden Horseshoe Conference game at Jack Gatecliff Arena.

Testa, who plays for the Niagara North Stars U16 AAA squad under coach Ryan Berard, made his presence felt from the first shift.

He netted his first goal in style as he turned a Fort Erie defenceman inside out with a nifty move and then beat Meteors netminder Duncan Nichols-Delay just over nine minutes into the game.

Four minutes later Testa scored again, this time when he jumped on a loose puck and tucked a shot under Nichols-Delay’s arm.

“His first goal, I haven’t seen many goals like that in our league this year,” Bielby said. “Just the finish, it’s next level.”

“He’s always off his feet, he’s just a very smart player and he’s got those physical attributes that most 15-year-olds don’t have,” Bielby said. “He’s taken advantage of his size and he’s put the work in. He’s getting rewarded, but he’s also a very smart hockey player and that’s what allows him to make the jump and adjust.”

The Falcons will be able to use Testa as an associated player for up to five games until his team finishes their season. After that, he can play an unlimited number of games at the junior level.

“We’ve always wanted to use him,” Bielby said. “As you know, we’ve struggled a little bit to find some offence and when we had some guys go down to minor injuries, we had an opportunity to bring somebody in who could maybe kick-start our offence and sure enough, he had three points.”

Testa, a Grade 10 student at Blessed Trinity, was all smiles as he emerged from the Falcons dressing room clutching a prized souvenir puck from his first junior goal.

“It felt amazing,” Testa said when asked about his performance. “Everybody was cheering me on and everybody was so happy for me. It was great to bring that same effort. They competed with me and pushed me to move forward.”

Testa was thrilled we he got the call to suit up for the Falcons.

“I was so excited,” the lanky centre said. “I can’t believe I got to come out here. I wanted to be with these guys, a great group of guys.

“It was an amazing experience.”

“There’s always that little, ‘Am I gonna do well?’ but I was very I was confident,” he said. “I’m confident in my game and I know what can I can produce so I thought I was going to do well and I did all right.”

With his size, poise and offensive talent, Testa would appear to be a scout’s dream.

“I’ll take every opportunity I can get. I am very excited for my future,” he said.

Bielby gave props to his entire square for a solid effort from top to bottom.

“I know the score, and the fact that we won is important, but for me tonight playing our game the way we teach and the way that we’ve been doing it in practice and translating that into a game, that’s what we’re most happy about tonight,” Bielby said. “We wore them down and played in their end for the better part of the game.”

Fort Erie coach Nik Passero felt his players may have been affected by the small ice surface — the Meteors play on an Olympic-sized rink in Fort Erie.

“I think we came ready to play and I think this barn shocked them a little bit,” he said. “I think playing in St. Catharines and playing in this rink, it was a little bit hectic out there.

Falcon facts: Michael Santini, Chris Reid and Matthew Stranges did not dress for the Falcons  . . . Scratched for the Meteors were Nathan Zadorozny, Noah Clugston, Bryson Essery and Harrison Langerak.

Falcons forward Luca Testa with two goals and an assist in his junior debut.

For the Fort Erie Meteors: No scoring.

Up next: The Falcons are off until next Friday when they host Welland. The Meteors host the Pelham Panthers Saturday at 7:15 p.m.

Matthew Riva continued his torrid scoring pace with three more goals to give him nine this season as the Niagara Falls Canucks topped the visiting Welland Junior Canadians 5-0 at the Gale Centre. 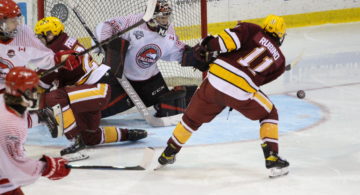 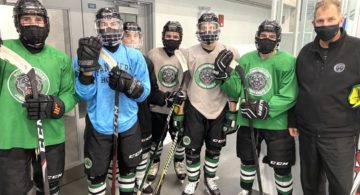 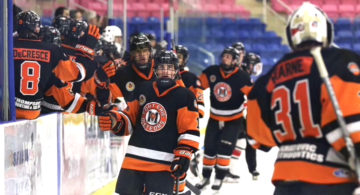