The St. Catharines Falcons returned to the ice Tuesday for the first time in more than two weeks after becoming the first team in the Greater Ontario Junior Hockey League to be shutdown by the COVID-19 virus.

Multiple players had tested positive after virus was contracted outside the dressing room in a setting of less than 10 people.

“It’s in the past in that we’ve done our 14 days of quarantine, but we always have that in the back of our minds what has happened and we don’t want the to happen again,” Falcons general manager Frank Girhiny said.

St. Catharines head coach Tyler Bielby and Girhiny had a meeting with the team before practice to make sure everyone was on the same page heading forward. 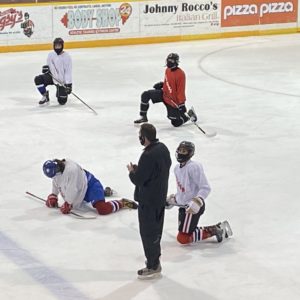 “We talked about the easy thing to do is to act like it’s the virus’ only fault and that no one else had anything to do with it,” Bielby said. “It’s a good opportunity to look in the mirror as individuals and make sure we’re true to ourselves to do what we can do to keep this virus out of the room.

“We’re in it together. It comes down to the masks and the close contact engagement. I challenged them do they want to be at the rink or be outside the rink with different groups of friends and the effects that will bring into the arena. I think they’ve all made the decision this is where they want to be and this is where their commitment will be.”

Girhiny reminded the players it’s not just about them.

“We have coaches who have jobs who don’t want to be quarantined. It’s a trickle down effect to our staff and to the parents and grandparents,” he said.

“You can’t be careful enough with this,” he said. “There is a lot of uncertainty and I think as a group we took the right steps in dealing with it and we’re going to make sure we take the right steps so that this doesn’t happen again and we can continue on with our season.

“I think it’s going to take a little bit of sacrifice from everyone. It’s about priorities and if everyone wants to have a successful season then we’re going to have to sacrifice a little bit. If that means maybe not going out with your friends, then so be it.”

Caruso said the Falcons were thrilled to be back at the rink.

“It really sucked sitting inside for so long. There were a lot of thoughts about getting back at the rink and seeing the guys and today was a great start in getting things rolling again,” he said. “I think for all of us in that room hockey is the most important thing right now.”

Bielby also appreciated being back.

“It’s a good reminder that we’ve been away from the rink. Just the smell and the feeling you get when you come into the rink, you miss it,” he said.

Bielby scrapped his original practice plan and let the Falcons just scrimmage for their first night back. The team will continue to work out three times a week for the remainder of the month.

The GOJHL has a tentative start date of Dec. 2 for a regular season pending government approval but there is still no schedule in place. The Golden Horseshoe general managers are holding a virtual meeting later this week.

One fall out from the virus is that the Falcons have lost starting goaltender Blair Coffin, who decided to not return to the team.

“When you go through something like this I figured we’d have some sort of fallout,” Bielby said. “It’s heavy. He’s decided this is it for him in hockey. He’s decided he wants to do the right thing for him and his family.”

The Falcons still have rookie Ben Bonisteel in goal and Girhiny said he is now on the lookout for a second netminder.