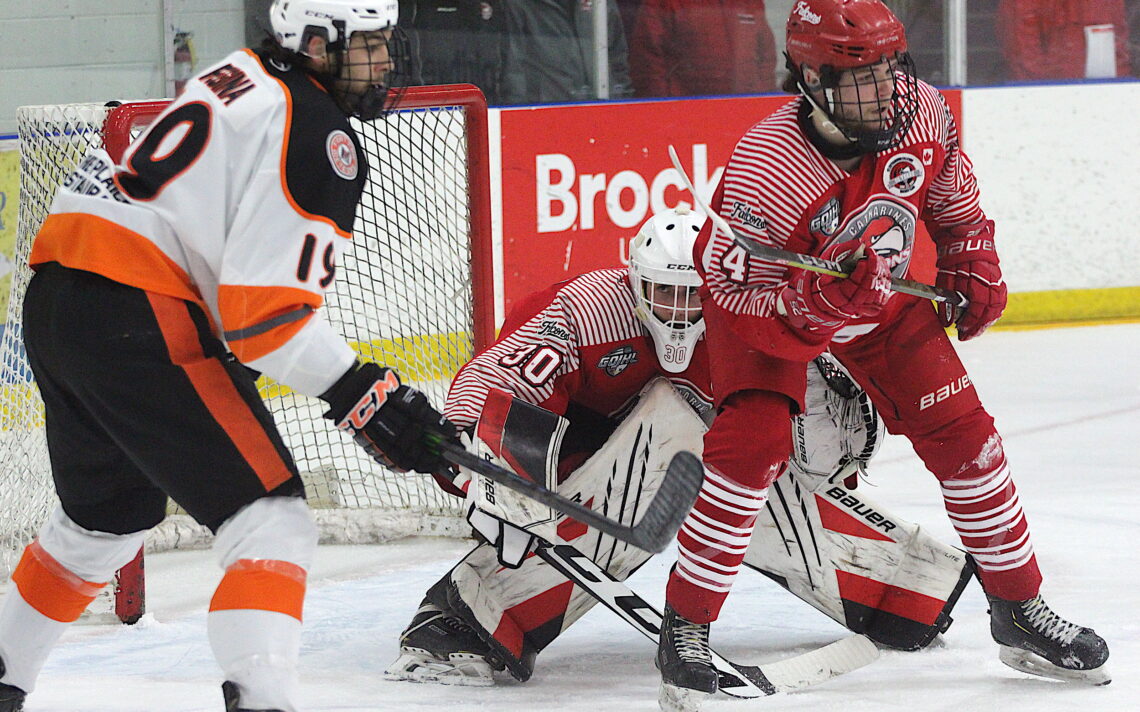 Blake Yetman continues to make push for not only a league scoring title, but perhaps a most valuable player award as well.

The veteran forward came through in the clutch once again, scoring with just 11 seconds remaining in overtime as the St. Catharines Falcons edged the Fort Erie Meteors 4-3 in a Greater Ontario Junior Hockey League game Tuesday night at the Seymour-Hannah Sports Complex.

Yetman, who last week netted the game-tying goal with .04 seconds remaining in an overtime win at Hamilton, now has 29 goals and 66 points in 34 games played. He is second overall to Zac McCann of the Stratford Warriors in points by four and leads all GOJHL players with 1.97 points per game.

Yetman now had points in 14 straight and has scored in five straight games.

“It’s fun. I’m playing with two great players (Cam Lowe, Nate Shirton) and when you’re playing with guys with that high skill it’s not hard to put the puck in the net,” the 20-year-old Whitby native said.

Falcons coach Tyler Bielby is well aware how important Yetman is to the team offensively.

“He had another big night where I don’t think we showed up as a team,” Bielby said. “That’s the kind of role he plays for us. We’re really proud of him but we’re continually challenging him to make sure he’s working on both sides of the puck so come playoff time he can be on the ice in big situations.”

Following a scoreless first period that saw the Meteors hit a pair of goal posts, the Falcons grabbed a 2-0 lead in the second on goals from Yetman and Shirton.

Fort Erie forward Brad DiTillio and St. Catharines defenceman Carter Geoffroy dropped the gloves for a spirited tussle later in the period and the Meteors scored on the ensuing play to get on the board.

Fort Erie then netted two goals to take the lead by the six-minute mark of the third before Jonah Boria scored with 1:10 remaining and goaltender Aiden Berry on the ice for the extra attacker.

“Matt Miller (assistant coach) drew up a nice face-off play at the end and we executed it well and buried it and took the win away from them,” Yetman said.

Bielby lamented the Falcons lack of focus and numerous turnovers.

“Not happy with our game tonight. That being said, I tip my cap to Fort Erie,” Bielby said. “I thought they came ready to play right from the puck drop. They played with intensity and passion. You could hear their bench.

“I thought we were a little flat-footed and it took us a while to get going.”

Fort Erie coach/general manager Nik Passero took little solace in the effort or single point picked up by his club.

“I respect it, but I’m done taking moral victories,” he said. “We were down to three lines because the refs missed a blatant hit from behind on the first shift of the game and now one of our young players (Henry Vest) is out for a while.

“We were down to three lines and I give the guys credit for that. They worked their butts off. We took the game to them for a lot of the game but we have to find a way to win and we didn’t do it.”

Passero applauded DiTillio’s grit which seemed to spark the Mets.

“Honestly, when he got in the fight it felt like a goal,” Passero said. “I looked at the clock and I thought we were down 2-1 and it was 2-0 and we scored right away. It felt like a goal on the bench. It was definitely a pump to the heart for us.”

The Falcons are now 34-4-2 and lead the Hamilton Kilty B’s by four points for first place with a game in hand. St. Catharines also own the top winning percentage in the province at .868.

Falcon facts: Cam Ewing, Michael Colavecchia and Zach Mizzi did not dress for the Falcons  . . . Caleb Bidgood was scratched for the Meteors . . . In other action Tuesday, the Pelham Panthers won for the first time in 22 games with a 3-2 overtime victory at home versus the Thorold Blackhawks. Jeremiah Rausch scored the winner 2:04 into extra time.

Falcons forward Blake Yetman with two goals and an assist.

On deck: The Falcons visit Thorold at Port Colborne Thursday at 8:15 p.m. and his the Blackhawks Friday at 7 p.m. The Meteors host Pelham Saturday at 7 p.m.