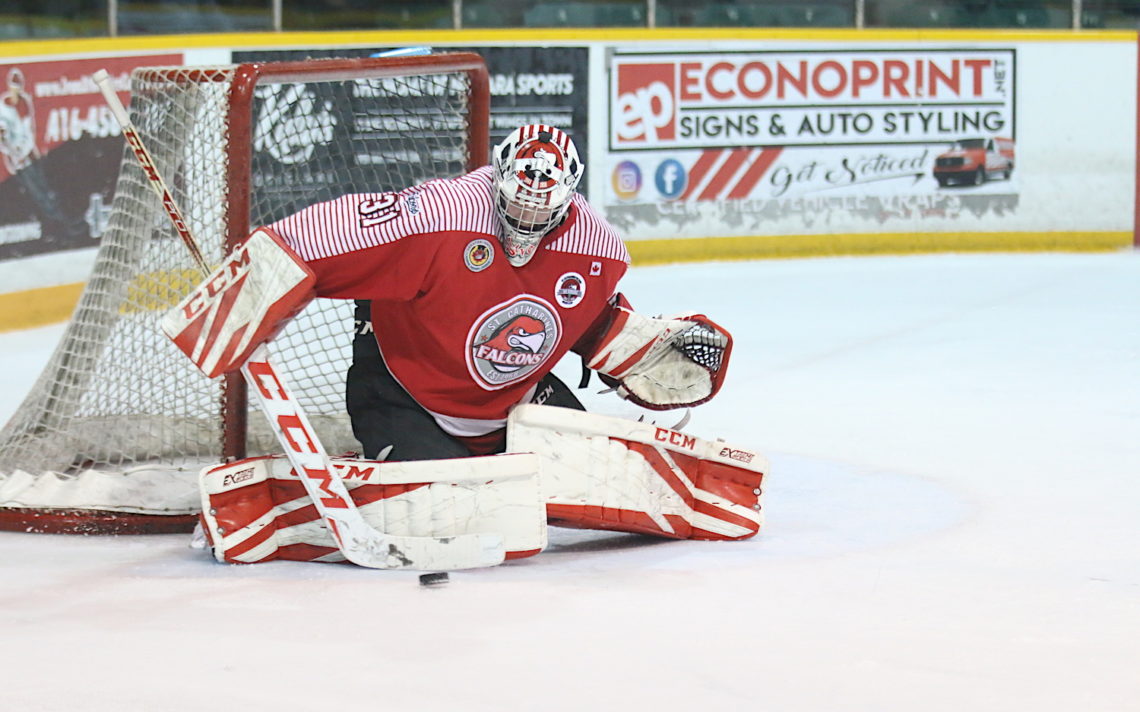 Game 2 is Friday in St. Catharines with Game 3 back in Caledonia Saturday.

“The boys played exceptionally well in the first two periods and played within the system we had set up,” Girhiny said. “We had lots of looks in the second and missed and in the third period we let it get away from us and they capitalized.

“Considering the lineup we had, I’m very proud of how we played. We pushed back, which was great.”

The Falcons had to employ midgets Holden Rogers, Spencer Smith and Ethan Sims with several forwards out of the lineup due to either suspension or injury.

Michael Davies, Kyle West, Zach Lawrence and Dakota Miskolczi were all out with suspensions while Noah Perlic and Carson Edwardson were banged up.

All should be back Friday with the exception of Miskolczi, who is still suspended, and Edwardson, who is the listed as questionable.

The Corvairs have been off for a week but jumped out to a 1-0 lead in the first period when Jesse Barwell scored. Caledonia held a 19-7 edge in shots.

Caledonia added to their lead in the second when Adam Craievich netted the lone goal the period. Each team recorded 12 shots on net.

“I thought we had just as many looks as they had,” Girhiny said of the first 40 minutes. “They scored two goals on misplays by us where we missed coverage.”

The Corvairs then broke open the game in the third with three quick goals by Craievich, Andrew Burns and Bobby Harrison three minutes apart before the seven-minute mark. Craievich then completed his hat trick with less than three minutes to play to round out the scoring.

The Corvairs went 1-4 on the power play while the Falcons had six opportunities with the man advantage.

Girhiny is confident the Falcons will rebound at home.

“We’ve been really good on home ice,” he said. “If we play within ourselves and within the systems we have set up, we’re expecting a win Friday.”