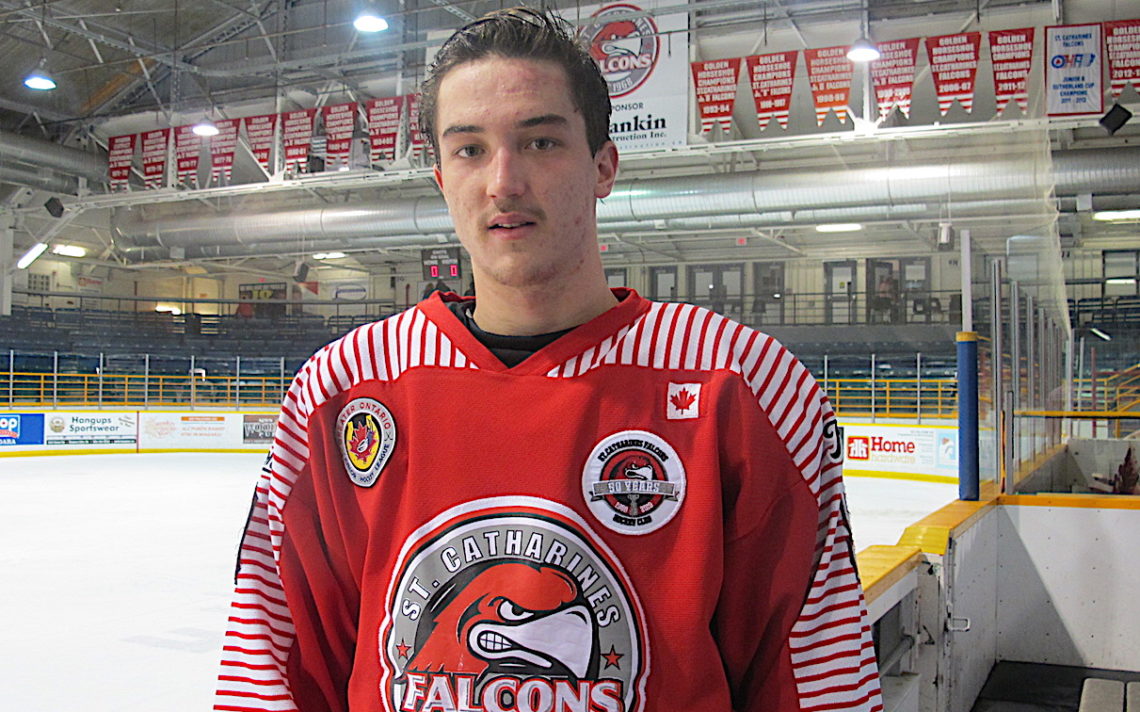 Dakota Miskolczi has come as advertised for the St. Catharines Falcons.

The 19-year-old Fort Erie native was brought aboard in large part due to his feistiness and willingness to mix it up.

Miskolczi has given the Falcons some much-needed sandpaper and has also more than held his own offensively.

Miskolczi was held off the scoresheet Friday but still managed to stick his nose in the action as usual as the Falcons defeated the Fort Erie Meteors 5-1 in a Greater Ontario Junior Hockey League, Golden Horseshoe Conference game at Jack Gatecliff Arena.

With the win, the Falcons wrap up for the Christmas break with a 23-7-1-2 record.

Miskolczi now has 11 goals and 19 points in 20 games since joining the Falcons earlier this year after beginning the season in Aurora.

“Just score, make some plays, and finish my checks,” Miskolczi said when asked for his role. “I’ve always been that type of player. It’s a big part of my game.

Miskolczi played AAA minor midget in Niagara Falls and was selected in the fifth round (98th overall) by London Knights in 2014 OHL Priority Draft.

He also played 11 games in the Quebec Major Junior Hockey League last season as well as suiting up for his hometown Meteors.

He seems have finally found a home with the Falcons.

“The chemistry in the room is good.”

“Having a guy like him who is also an offensive threat and puts the fear of God into the opponent is invaluable,” Fitzgerald said. “He’s a really tough guy to play against. He’s certainly a guy you want on your team.

“The way he can shoot a puck and the way he can finish a check, there aren’t many guys who can do both. He’s a great part of this team and he can change the game in different ways.”

Miskolczi spends his share of time in the penalty box — he has 74 minutes in penalties so far in just 20 games.

“He’s a smart hockey player who knows when to pick his spots but he’s crossed the line a few times,” Fitzgerald said. “I like how close he is to the edge. If we can keep him close and not cross it, that’s fantastic.”

“Fort Erie is relentless on pucks and do pose a good test for a lot of teams,” Fitzgerald said. “They’re a team we can’t take lightly so it was good for us to get up early and then play with the lead all night.”

Falcon facts: Mitch Pellarin and Michael Davies did not dress for the Falcons  . . . Daniel Nardi, Trey Moreau and Cail Cirillo were scratched for the Meteors  . . . Falcons forward Lucas Smilsky was honoured as the Golden Horseshoe offensive player of the month for November  . . . Teams have switched to their dark jerseys at home and white on the road for the remainder of the season . . . The Falcons honoured players from their third decade as part of their 50th anniversary celebrations  . . . The 50th anniversary yearbook is now available . . . The OMHA champion St. Catharines major bantam AA Falcons were honoured before the game. Former Niagara IceDogs coach Marty Williamson was part of the coaching staff.

Up next: The Falcons are back in action Sunday, Jan. 7 at Pelham.