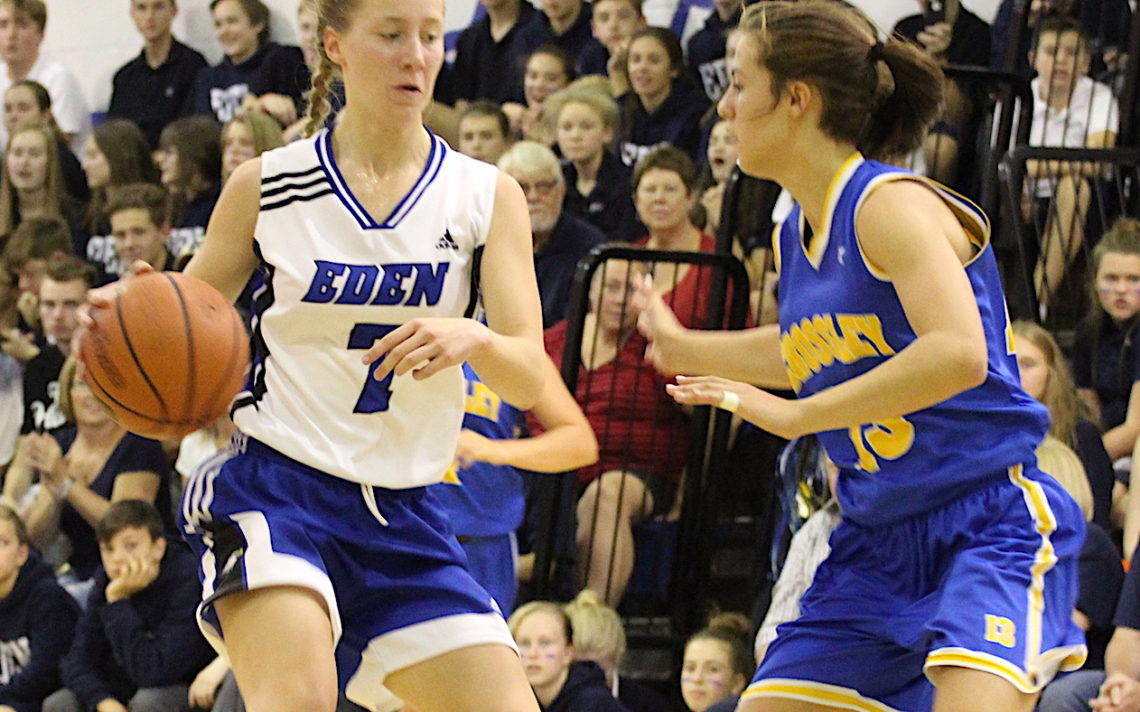 Passion is just one of the attributes that makes Eden’s Mackenzie Schroeder a good basketball player.

“What I’ve been telling the kids about Mackenzie is that she plays with joy. Nothing bothers her,” said Eden coach Brian MacIsaac Tuesday, after his team defeated the E.L. Crossley Cyclones 56-32 in its opening game of the Standard Girls Basketball Tournament.

The 16-year agrees she’s a joyful player, but she certainly wasn’t always that way.

“When I was younger, I got down on myself a lot,” the Grade 11 student said. “If I made one mistake, I would start crying and then I would have a bad game.” She started to figure things out in Grade 10 and by Grade 11 she was no longer that player.

“I learned from growing up that if you mess up once, who cares? It already happened so you have to keep on going.”

The 5-foot-9 guard, who led her team Tuesday with 14 points, has totally changed her outlook on basketball.

“If anyone makes a mistake, I pump them up and get them motivated and mentally ready for the game,” the Niagara JUEL player said.

“This year, it really hit home for me. I kind of found my style of play.”

Training at No Limit Performance and attending christian camps have helped alter her perspective on basketball.

Schroeder provides a lot more than just a positive attitude for the Flyers.

“She has been playing a lot outside of school and she has a really good sense of when to take charge and when to involve her teammates,” MacIsaac said. “She’s very fluid and she just goes. She has a high motor, is high skill and is a really good decision maker.”

Schroeder feels her game has developed a lot over the past few seasons.

“I knew how to play basketball but my skill set has developed a lot; just shooting and being consistent at everything,” she said. “Getting to know myself and how my body works, that’s how I got to grow as a player.”

She played senior last year for Eden when she was in Grade 10 and she has now become one of the team’s leaders.

“I’m one of the captains so obviously I have to show leadership and encourage the girls to keep going,” she said. “If anyone gets down, my role is to be a positive motivator.”

Her motivational style includes an unselfish style of play.

“When everyone gets to touch the ball and everyone gets a chance to score, it makes a good basketball team,” she said. “It’s a family and not one player is going to go and do it all by themselves.”

Schroeder would love to play basketball at the post-secondary level, but knows there’s lots of work ahead.

“I want to get better as a person and a player,” she said.

Eden is hoping it can have another successful season.

“We lost a lot of players to graduation but we have a solid core of players,” MacIssac said. “I think the competition is tough this year and there’s a lot of good teams. Making the zone final would be great.”

Heading into the Standard tournament, the Flyers were unbeaten in Zone 4 play with victories over Governor Simcoe, Thorold and Laura Secord. Including tournament play, Eden is 12-1 overall with its lone loss coming to a very strong Notre Dame team.

Erika Rouse had six and Rachel Frena and Sawyer Fast had five each in the win over Crossley. For the Cyclones, Mackenzie Sider had eight and Emily Bonisteel netted seven.