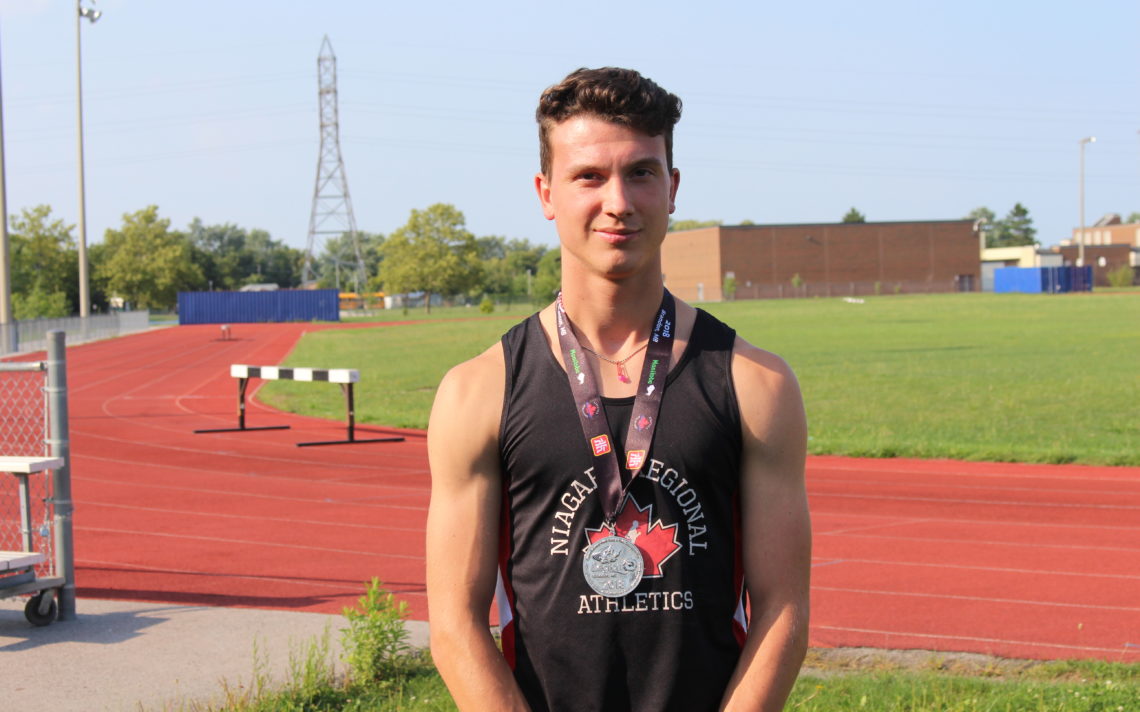 Blake DeVinney is a quick study.

Competing in only his second ever decathlon, the Niagara Regional Athletics member returned from the Royal Canadian Legion Youth Track and Field Championships in Brandon, Man., with a silver medal in the under-18 division.

The Grade 12 student at Centennial in Welland agrees his podium finish was unexpected.

“I was focusing on what my goals were in each event and trying to perform in them.”

The 17-year-old Ridgeway resident had the lead after the first day of competition and came within about 100 points of claiming gold. 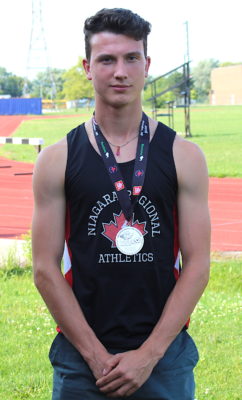 It was a proud moment for DeVinney when the national silver medal was hung around his neck.

“I was still pretty exhausted from the 1,500 metres and a little bit dazed, but it was a great moment,” he said. “I don’t really have many words for it.”

Prior to his indoctrination in the 10-sport decathlon, DeVinney had made a name for himself as a hurdler. During this past high school season, he won the 110-metre and 400-metre hurdles at the Southern Ontario Secondary Schools Association championships and placed ninth and 11th in the respective events at the Ontario Federation of School Athletic Associations championships.

“To be honest, I started doing hurdles in Grade 9 and then after a while I started to get bored because I liked doing other events,” he said. “The decathlon was perfect because it is 10 events and you get to do everything.”

His best events in the decathlon are the hurdles and sprints while his big challenges come in the throwing events.

“I am not the biggest guy so it is kind of hard to throw,” he said. “But what I like about the decathlon is waking up the next morning and you are so sore, but at the same time you are so ready to go and do well.”

On the second day of nationals, all those feelings were in play.

“My legs felt dead and I was a little bit dehydrated because I should have drank a little bit more water,” he said. “But it was today’s the day and I am going to get a medal because I was in first place when I woke up.”

He struggled a bit in the hurdles and then rebounded with a solid showing in the discus.

“That got me back on track a little bit,” he said.

“Endurance and speed is the key,” DeVinney said.

He plans to focus his track and field efforts on getting better at the decathlon and train through the winter in some of the events.

“I have had a few scholarship offers from the States and my goal, if I am going anywhere in the States would be Division 1,” he said. “If not, a good Canadian school and hopefully I can be on the Canadian team one day. That would be nice.”

In addition to track and field, he played house league soccer in the sports and other school sports at Centennial, such as badminton.