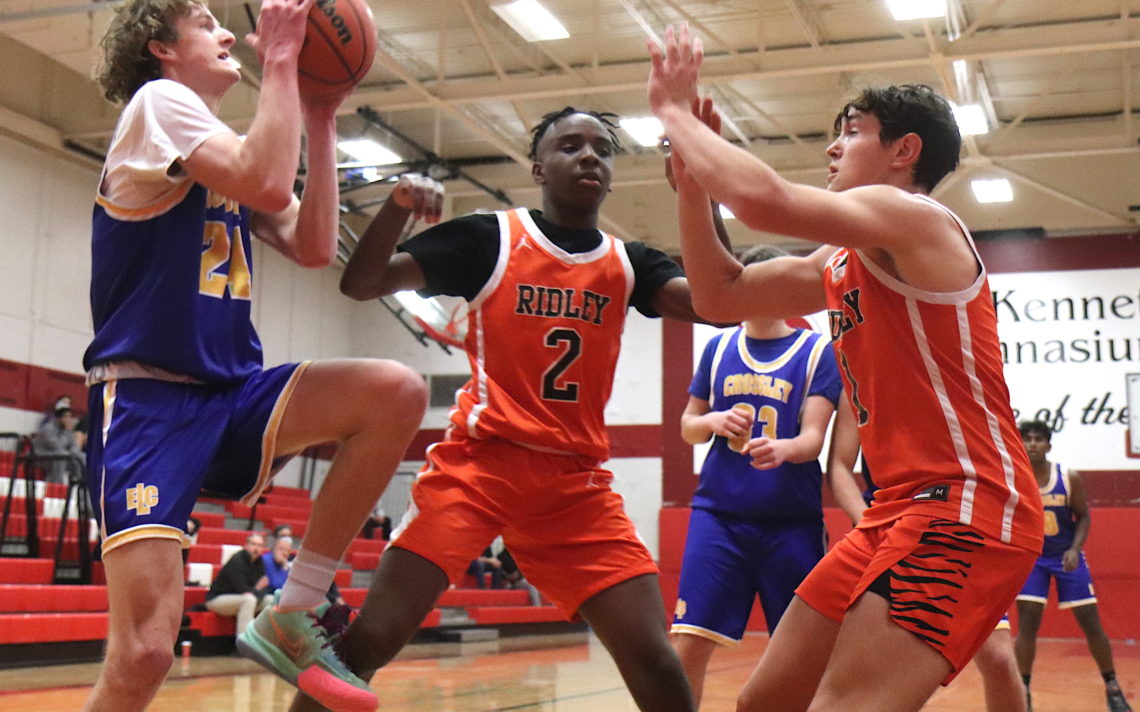 Riley Bleich is finishing his high school career on a high note.

The 6-foot-8 E.L. Crossley Cyclone post player had 10 points, including a pair of emphatic, back-to-back slam dunks, and double digit rebounds Tuesday at Denis Morris to power the Fonthill school to a 68-23 win over Ridley College in the championship quarter-finals of the BPSN Best of Niagara Boys Basketball Tournament.

The 18-year-old has had a blast playing at the high school level.

“It is enjoyable and it has been really fun to get to play with my brother (Connor). I have enjoyed my five years at Crossley,” the 12B student said.

Riley would have loved to played in the Tribune, Standard and high school playdowns in his Grade 12 and 12B years but the COVID pandemic had other ideas.

“It was hard because those are definitely things you look forward to when you play high school basketball. But it is great that I got to come back for my last year and play a good amount of basketball.”

In the first two games of the BPSN tourney, Riley has already recorded five dunks, something that was missing from his game earlier in the season.

His dunks are good for the Cyclone’s energy.

“It brings the momentum to us,” he said.

This fall, Riley will be joining the Niagara College men’s program and he is looking forward to taking his game to the next level.

“I have to put on some weight, bulk up a bit, and get a bit better with my shooting, taking it to the basket and becoming an all-around tougher basketball player. High school and college is a big gap but I am willing to do the work.”

Riley has been hearing most of the above stuff already from his father Brian, the head coach at Crossley.

Riley doesn’t disagree with that statement.

“I have to work on that a lot because I am not an aggressive person.”

“It was a slow and sloppy start and both teams couldn’t put the ball in the basket,” Brian Bleich said. “We had to pick the tempo up to get ourselves into it and once we did that it opened up the game and I think our guys got a little more loose.”

The win sets up a tournament semifinal game for the Cyclone against the Churchill. When the two teams met in the Niagara Region High School Athletic Association regular season, Crossley lost on a three-pointer at the buzzer. It was one of the best high school basketball games in recent memory.

“The boys are looking forward to it more than I am. It is important for the boys to go back and play that game again,” Brian Bleich said. “We think we are the two top teams and now it is our opportunity to play them again. It will be a good game and both teams match up well against each other. It will depend on whose shots are falling.”

Riley is ready for the rematch.

“I am definitely looking forward to it. I have heard there is going to be a good amount of people there and I want to make sure I come out and perform. We want to show what we are capable of.”

Ridley College was able to pull off the upset against Denis Morris Monday but they were no match Tuesday for the athletic, talented and veteran Cyclone players.

“We looked like Grade 9s for a bit in that one,” Ridley head coach Josh Doan said. “All power to them. They are really well-coached and they play great man-to-man defence but our struggle all year being young is trying to get separation and get to the basket. I am proud of the way my guys played and I am happy we got to play some local teams.

The Tigers season has been over since before March Break and Doan enjoyed the chance to compete in the BPSN tourney.

“Yesterday was a dream moment for the kids and the program. They loved seeing the article,” he said. “We are just happy that the community got together and staged the tournament. Thanks to Frank Keltos and all the guys who arranged it and you (BPSN) as well. We appreciated being invited.”

Up next: Crossley advances to play Churchill in the championship semifinals Wednesday at 6 p.m.

The Denis Morris Reds advanced to the BPSN consolation semifinals with a 75-24 victory over the Lakeshore Catholic Gators.

Denis Morris advances to the consolation semifinals against Saint Paul Wednesday at 3 p.m at Churchill.