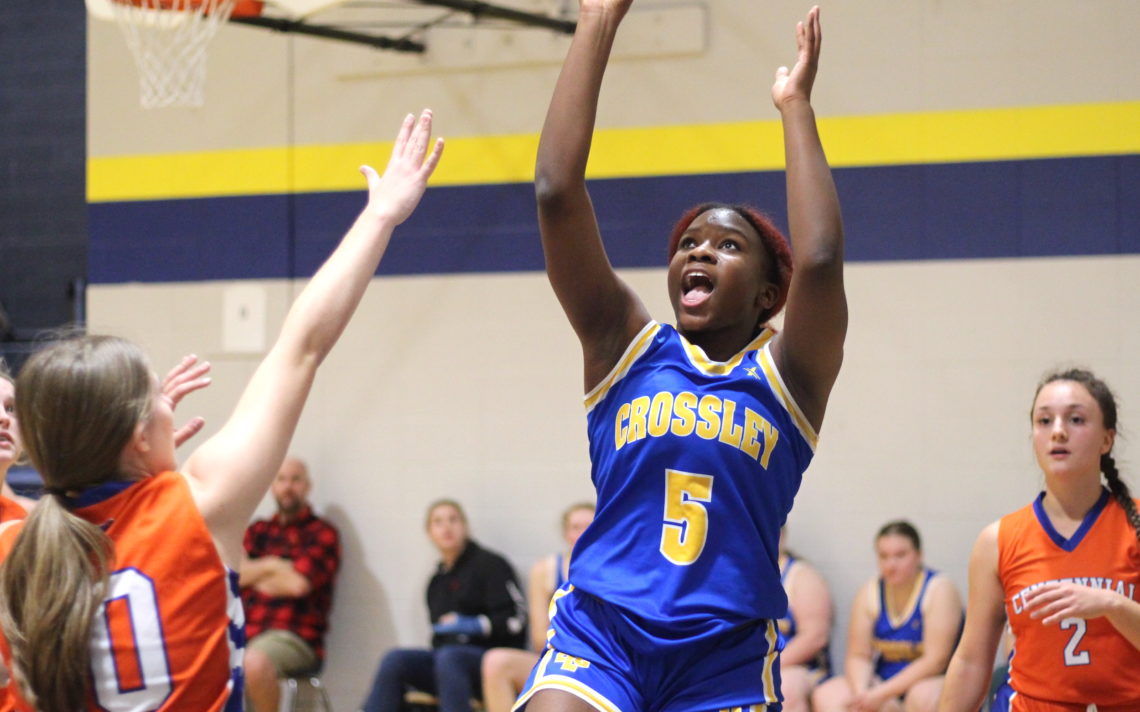 Grace Sodtke loves to horse around.

The 17-year-old, Grade 12 student enjoys spending time with her horse, Sunny, when she’s not on the basketball court for the E.L. Crossley Cyclone.

“I like to ride horses,” Sodtke said. “I used to show in Barrel Racing but now I just ride for fun.”

Sodtke also enjoys being an integral part of the Cyclone as a veteran post player.

“I like to work at the high post, that’s my sweet spot,” Sodtke said Wednesday, after scoring eight points as the Cyclone topped the Centennial Cougars 43-15 in the Niagara Regional High School Athletic Association Zone 3 senior girls AA basketball final at Crossley.

Sodtke’s contributions as a depth player are key on a squad which relies on Kaitlyn Brophy to do the bulk of the scoring.

“If I can get it to her and help the team out and chip in with a few, it makes a big difference in the long run,” Sodtke said. “They like to throw box-and-ones on her, they like to really double team her because obviously she’s a strong player. L’Jayah (Simmonds) played wickedly today and got us rebounds.

“When we get others to chip in it helps so much so the whole game isn’t riding on her [Brophy).”

Crossley coach Aaron Belding feels having depth is the key.

“It’s very important because if I only have one girl scoring then that gives me one weapon the other team has to focus on but if I have L’Jayah scoring 12 points and Grace scoring eight, that means they have to look at other players too which then opens Brophy up and that helps everybody,” he said.

Belding appreciates what Sodtke brings to the table.

“She’s a post play, a leader and she helps with communication,” he said. “It’s one of those things where it’s hard to say exactly what she does, but she’s calming. If we’re in a fast-paced game, she can move fast and go at that pace too. Just being able to calm other players down and get everybody to play better.

The Cyclone jumped out to a 10-3 lead after one quarter.

“We talked about coming out hard,” Sodtke said. “We know we have to play our game, every game. We have to pretend they’re the best team out there, every single game. We have to come out and hustle, move, want the ball, be smart about it and make good passes.”

Belding was able to empty his bench and get some of his subs some much needed playing time.

“At the beginning of the year, I would not have had my bench players in to finish the game but I’ve had big injuries [Sarah Lowry, Amelia Siolkowsky),” Belding said. “Those are two of my basketball experienced players that would definitely give us a lot more depth. With not having them in the lineup, that means the other athletes have progressed a lot better.”

The Cyclone advance to the SOSSA AA playdowns at Governor Simcoe Thursday, Nov. 17.

Up next: The Cyclone advise to the SOSSA AA playdowns at Governor Simcoe Thursday, Nov. 17.