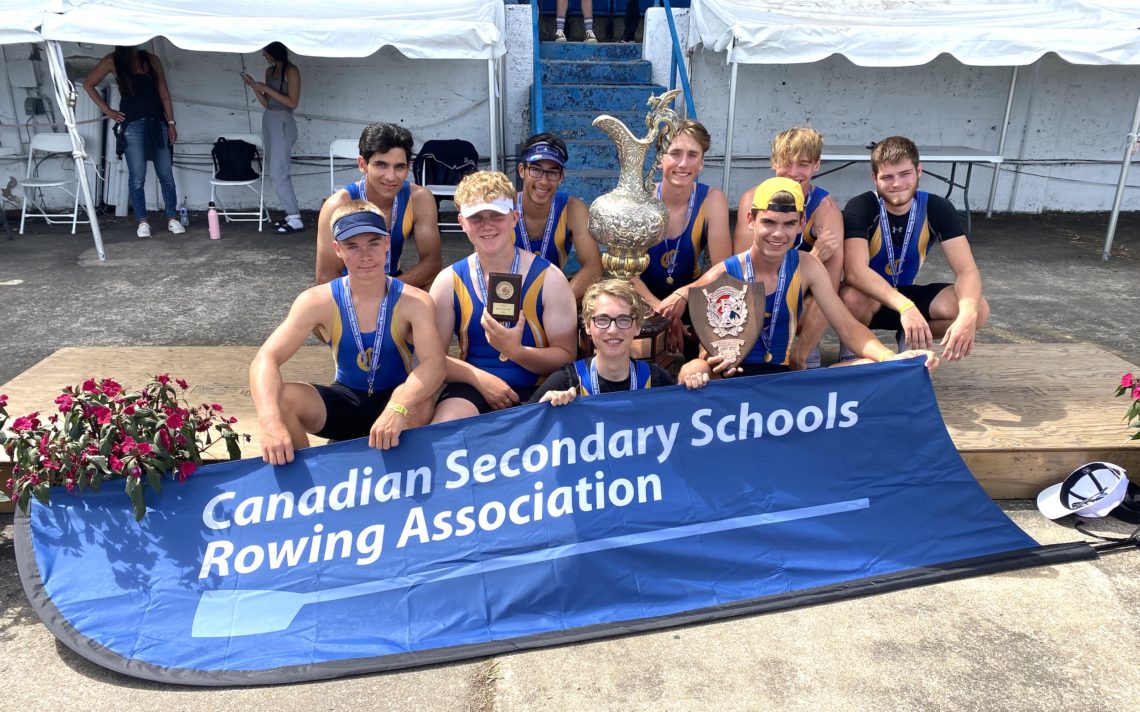 The Canadian Secondary Schools Rowing Association Regatta returned to the water for the first time in two years this weekend on Henley Island.

The 75th edition of the regatta was the first to be held since 2019 due to the COVID pandemic and wrapped up with 42 finals Sunday.

“We’re overjoyed and the weather cooperated.”

No efficiency trophies were awarded this year.

“It’s awesome,” Vaca said. “The last time I raced was three years ago and we won the junior eight. I was expecting to not even win, just to get a medal. After the quad, I would have been happy just to get a medal but we came through and took the gold.”

Vaca said it was all about teamwork.

“I think our chemistry works,” he said. “We match together personalities and that’s a big part in a double. If the double doesn’t work with each other, not even in rowing but in personality, it doesn’t work.”

Owen Bartel of Eden earned a gold in the senior men’s single, following in the footsteps of his father, Bruno Bartel of Niagara District.

The younger Bartel also raced in Grade 9 and was thrilled to be back.

“The start wasn’t great but I stuck to my plan of just going down the course and then had a solid finish,” he said.

Bartel then combined with Mathias Essig just over two hours later to earn another gold in the senior men’s double.

“It’s all the amped-up energy,” Bartel said. “There was enough time in between I was able to eat and get some Gatorade into me.”

Bartel was quick to give credit to Essig for strong teamwork.

“He has dedicated a lot of his life and is dedicated to our crew,” she said. “We are out six days a week on the water for two hours. It is a lot of dedication and sacrifice but this made it worthwhile for sure.

“After the two-year break, it was great to be back on the water rowing with other novice crews that are also in the same circumstance as we are,” Bray added. “It is nice to see how everybody grew over the break and who didn’t grow.”

Charlotte Pieckenhagen and Sydney Swick teamed up for Ridley’s second gold in the junior women’s double after placing second as part of the crew in the senior women’s quad.

“It’s really great,” Pieckenhagen said. “The first race was really hard because we were right there with Notre Dame and the second one we had some competition from DM and it was great because they pushed the whole way down the course and they did a lot more than we were expecting. We didn’t have the best start but we definitely picked it up.”

Cait Whittard of Denis Morris had no problem picking up gold in the senior women’s single, easily outdistancing Anna Parmenter of Lorne Park and Autumn Crowe of Ridley.

“I was quite nervous for it,” Irvine said. “It went pretty fast but we all did pretty well and tried our hardest and I guess we got done.”

Irvine said the crew had no preconceived notions coming into the race.

“We didn’t know about the other crews so we just went hard,” he said. “We went in thinking it would be the hardest race of our life.”

Meredith Hilmayer and Katarine Druzina teamed up to earn gold in the senior women’s pair for Crossley’s fifth gold.

“We just got in this pair a week ago,” Hilmayer said. “We had a little injury on our team so it was a last-minute race. We put our attitudes into it and pulled through.”

“I think it’s technique. We row the same way and we’re the same height. I think that helps a lot.”

“We visualize before racing and then we talk about what we want to work on and then we just encourage each other throughout the race,” Young said. “Our coxie makes calls for this person in the boat and the person behind you and it is really motivating,” Young said.

The crew placed first in the semifinals but it was anything but a calm, cool and collected run to gold.

“We changed our stroke the day before semifinals. We wanted to see if we could up the rate and see what seats worked out the best.”

Young admitted the move to put Spilotro at stroke was a little worrisome.

“It was a little bit but we trusted each other and it went really well.”

Crossley then closed out the regatta in style, winning both the senior women’s eight and senior men’s eight.

“It was a crazy finish, it was neck-and-neck,” Wimbush said. “It was a hard fight but the girls really pulled through.”

“We knew we had the ability to win but we knew we were going to have to fight for it and we did.”

“It’s absolutely incredible,” DiLorenzo said. “It was a dogfight, neck and neck all the way pretty much.”

DiLorenzo said all the extra work the crew did paid off.

“We’ve been training all year, just very confident in our training but we didn’t expect to win.”