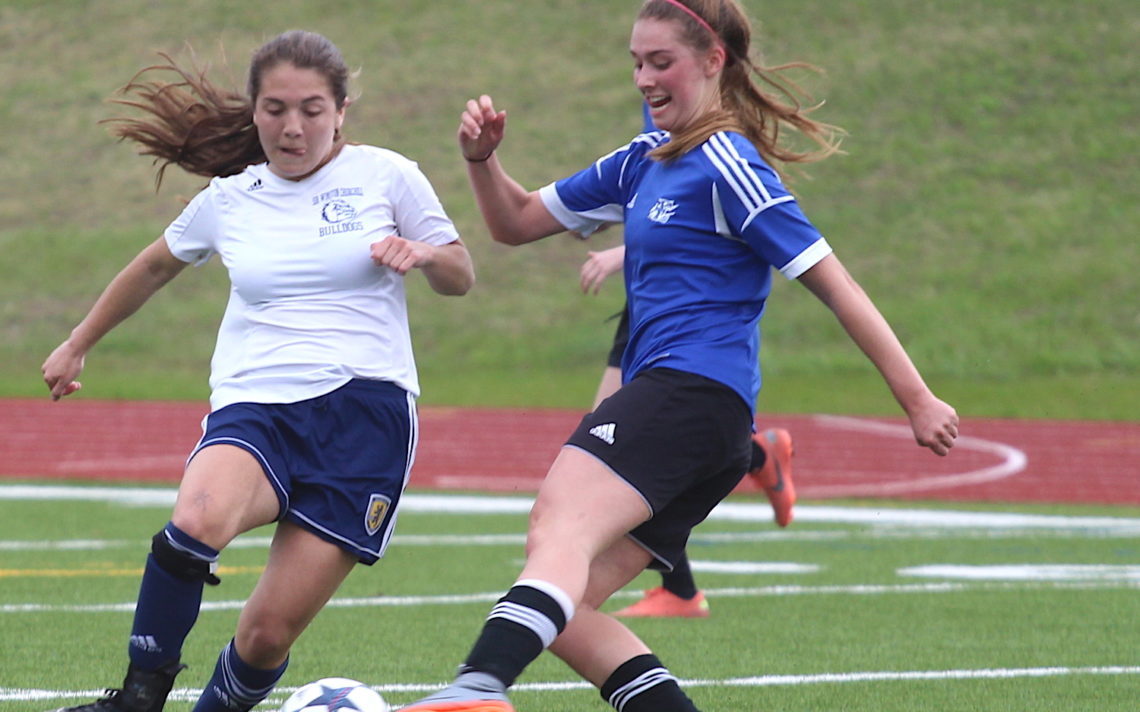 Churchill’s leader of the pack

Jordan Gabriele takes a laid-back approach to her role as the captain and leader of the Sir Winston Churchill Bulldogs senior girls soccer team. 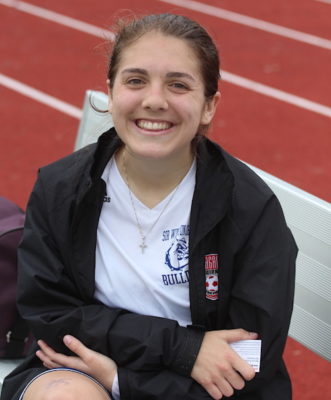 “I try to encourage the girls because I don’t think putting anybody down is ever a good idea,” the former Niagara Regional Soccer Team player said. “I try to guide them on the field and be their teammate. I want everyone to feel equal and help them believe we can win if we really push and play together as a team.”

“In practice, she is intense and encouraging and on the field she really acts as that captain,” he said. “ On corner kicks, she tries to make sure every girl is marked by somebody and her work rate sets the example for the rest of the team.”

Being a leader isn’t something that comes easy to her.

“Some parts are a challenge, but we are all a team and we all help each other,” said Gabriele, who scored a goal Thursday as Churchill defeated visiting Eden 4-0 in Niagara Region High School Athletic Association play. “I kind of see myself as another player and I am there if they need guidance or leadership.”

Gabriele, who plans to take a year of after finishing Grade 12 before heading to the University of Waterloo, is in her second year as team captain and she has evolved over that time.

“I’ve learned to become more patient because I would sometimes get really into the game and want to say something,” she said. “But then you have to sort of calm yourself down.”

She has played soccer all four years at Churchill and the farthest she has seen the team go was the Southern Ontario Secondary Schools Association championships when she was in Grade 9.

“We haven’t made in since then, but I have a good feeling about this year,” Gabriele said. “I’m hoping we can go all the way to OFSAA (Ontario Federation of School Athletic Associations) because I want to take it home.” 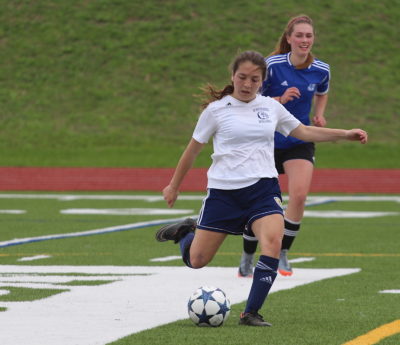 Gabriele is used as more of a defensive midfielder, but she has been told to take advantage when she is able to attack.

“You see her doing both roles, but she hustles all the way back to defend,” Mouck said.

Also scoring for the Bulldogs were Julia Barker, Morgan Buchan and Rachel Blanchard. Kaley DeMont recorded the shutout for Churchill.

The Bulldogs improved to 3-0 with the win, but the score didn’t indicate how close the game played out.

“It was an evenly played match and I think both teams possessed the ball well,” Mouck said. “At the beginning of the game, I thought Eden controlled the play, but our defence held very strong and that gave us a chance to weather that storm.”

After Barker’s goal, Gabriele and Ally Sentance started to control the midfield and Churchill was able to record the victory.

Mouck likes how his team is playing at this point in the season, but needs to see his team continue to do things the right way.

“We’re working on getting the ball wider and once we do it, it gives us attacking options,” he said. “When we play narrow, we limit ourselves.”

Gabriele believes the team has been successful because it wants to win.

“We are hungry for the ball,” she said. “And even if sometimes our passing isn’t the best in games, we move the ball quickly. Having that aggression and hunger for the ball are what our strengths are.”

The Eden Flyers fell to 2-1 on the season with the loss.

“We have been doing pretty good and that was our first loss this year,” Eden coach Danny Tische said. “We were missing some key players, but they are a good team.

“Even though we had some decent possession, it just wasn’t our day.”
So far this season, the Flyers have had a lot more good days then bad.

“We have had good passing and great communication,” Tische said. “We have a young team, we are developing and we are doing well.”

“It didn’t feel that bad,” Gabriele said. “We had morning practices in the winter so I feel that we are pretty used to it.”

All photos on the BPSN website are available to purchase in high-resolution form. Please contact bernie@bpsportsniagara.com for more information.