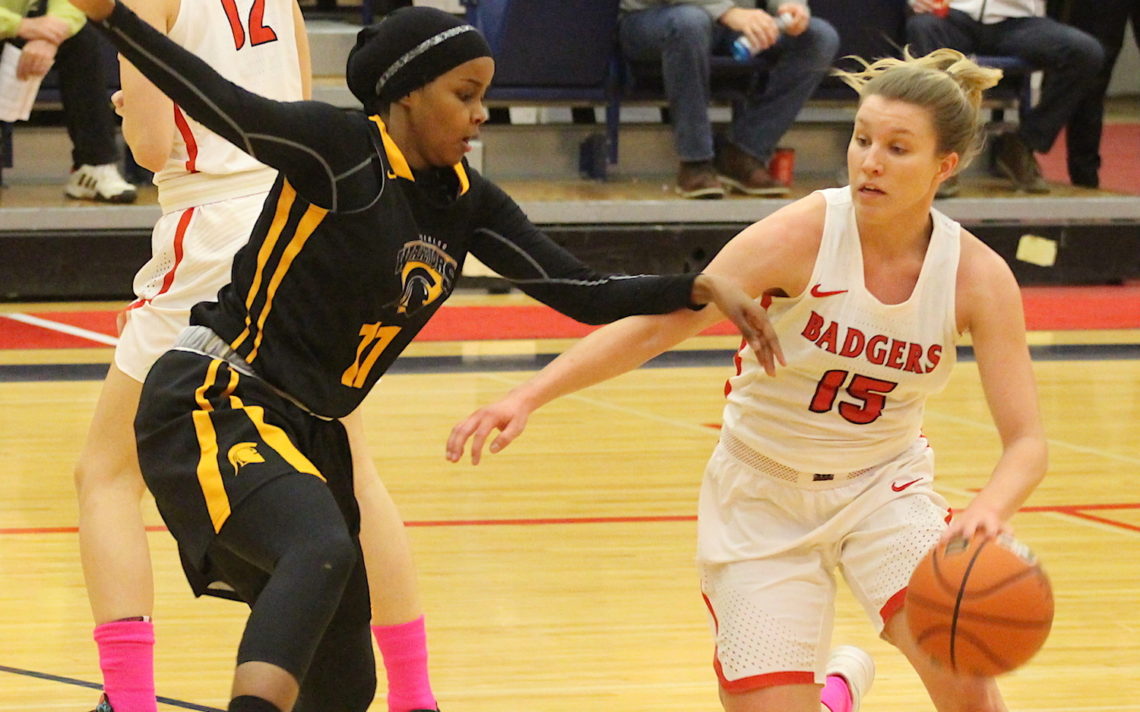 Bailey Campbell and her Brock women’s basketball teammates wore pink Saturday in a game versus visiting Waterloo as part of the university’s Breast Cancer Weekend. Photo by BERNIE PUCHALSKI.

Brock’s wrestlers had a great weekend at the Western Open and the Ontario junior championships. 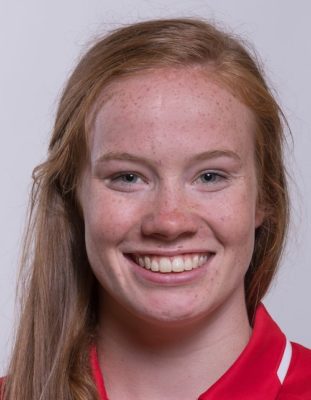 The Brock Wrestling Club took both teams titles at the Ontario junior championships. 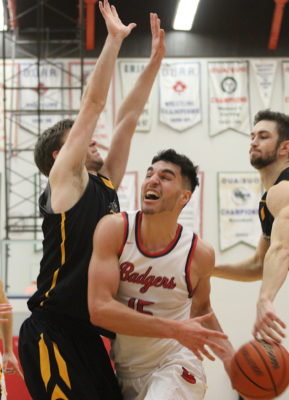 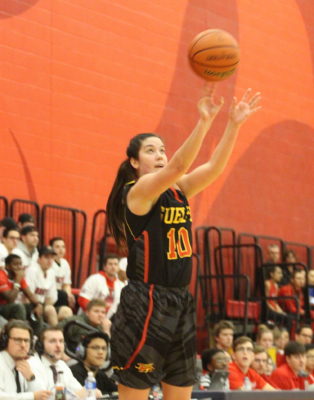 Brock has won three straight matches to improve to 3-9 on the season. 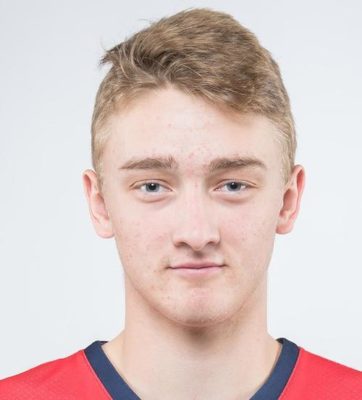 House was named Brock’s male athlete of the week for his exploits. He is sixth in the OUA in kills and seventh in points (169).

Leading the way for Brock versus Ryerson were: Helmer, 11 kills; Condotta, 10 kills and 10 digs; and, libero Julia Balatbat, 13 digs.

Katie Desveaux, a fourth-year sport management student, was named co-winner of the Brock female athlete of the week award after helping Brock to a second-place finish at the University of Toronto Winter Invitational. 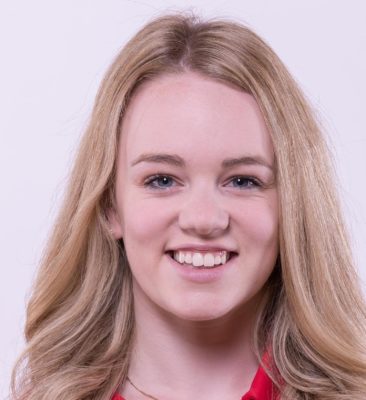 Desveaux placed first in the open short dance, combined with Emily Albrecht to top open solo dance and was third in the intermediate similar pair freeskate with partner Alexa Leitch.

Against Western, Brandon O’Quinn and Cosimo Fontana scored in regulation time and Josh Timpano potted the overtime winner. Clint Windsor made 33 saves to pick up the win goal.

Dexter Weber, Fontana and Timpano netted the goals versus Ryerson.

Brock sits in fifth place in the OUA West Division with a 12-7-5 record.

In its only game of the week, the Brock women fell 3-2 to the University of Toronto. Brenna Murphy and Christina Ieradi scored for Brock.

Brock’s four curling teams were at the Dundas Valley Golf and Curling Club to compete in the McMaster Marauders Invitational Bonspiel.

The men’s varsity team, missing third Jamie Waters, who was competing in a mixed doubles provincial qualifier, went 3-1 to finish 8-6 in exhibition play.

The junior women’s varsity team, skipped by Jeanette Burnside, went 1-3 and are at 3-6 in exhibition play.

The junior varsity men also went 1-3 to sit at 3-6 in exhibition action.

Prior to Brock’s volleyball game versus Trent, volleyball players Renee Helmer and Grace Edwards, basketball player Courtney McPherson and  hockey player Julia Pettella cut off eight inches off their hair and donated it to the cancer society to be used to make wigs for children who have lost their hair during cancer treatment.

Meridian has joined the Badgers Care Program as a corporate sponsor.

Established in 2015, the  program encourages Brock varsity teams, coaches and student-athletes to be good community citizens through outreach, leadership and volunteerism. 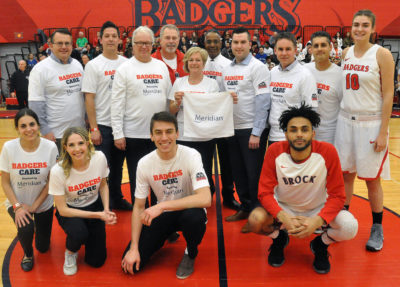 “Badgers Care allows these student-athletes and their coaches to use their passion for athletics to foster their own personal development beyond academics and sports,” Brock athletic director Neil Lumsden said. “At the same time, they’re working alongside the community to make Niagara a better place to live, work and play.”

Wade Stayzer, Meridian’s vice-president retail, said the relationship is a natural fit since both Brock and Meridian have a long history of collaborating to help build stronger communities. Meridian will provide Badgers Care with additional funding to extend its programming reach in Niagara.

“Both organizations aim to recognize and enhance the leadership potential in people,” Stayzer said. “At Brock, student-athletes find time between school, training and playing to volunteer and bring to life the Badgers Care program.

“At Meridian, employees build people’s lives through advice and fulfilment of financial services and we, too, volunteer and demonstrate our passions through our commitment to building strong communities.”

Mary Ingribelli is making a habit of being named Niagara College’s female athlete of the week.

For the second consecutive week and third time overall, the Governor Simcoe grad garnered the award. The fourth-year guard from St. Catharines scored a game-high 26 points to lead the Niagara’s women’s basketball team to a 75-41 victory over the Conestoga Condors in Ontario Colleges Athletic Association play. She also added six steals, three rebounds, and an assist.

“Another great performance from Mary,” Knights head coach Mike Beccaria said. “We will need Mary to continue her dominance if we hope to make a run for a medal this season.”

Ingribelli currently ranks second in the OCAA with a total of 237 points and is ninth in average scoring with 16.9 points per game.

Ingribelli and the Knights (9-5) host Sheridan Bruins at the Welland Athletic Centre Wednesday. The game will be the first ever #NCTalks for #BellLetsTalk Mental Health Matchup designed to help end the stigma surrounding mental health issues in Canada.

The 6 p.m. event include free food, popcorn, cotton candy, and Bell Let’s Talk swag.. Admission is free for Niagara College students and $5. for everyone else.

Niagara’s third-place men’s basketball team improved to 10-4 on the season with an 89-66 victory over the visiting Conestoga Condors.

Leading the way for Niagara were Van Hutchison Jr., 20 points and 11 rebounds; and, rookie point guard Johnnie Richardson (Niagara Falls), a season-high 14 points on 3-for-6 shooting from behind the three-point arc.

Playing well for Niagara against St. Clair were: Jordan Koslowski with 11 kills and Rachel Rivers with nine kills.

Against Fanshawe, rookie libero Ainsleigh McInnes-Williams led the way with 16 digs. She now has 148 on the season. 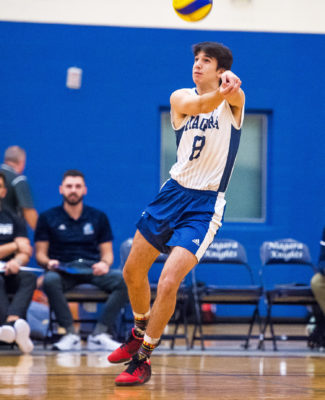 Leading Niagara past St. Clair were: Jaydon Milne and Elijah Bugiardini with 12 kills each.

Against Fanshawe, Bugiardini led Niagara with eight kills and was named Niagara’s male athlete of the week.

The 6-foot-2 Hamilton St. Mary’s graduate has been averaging 1.8 points per set and the Knights hope the first-year outside hitter will continue to develop into a regular contributor within their starting rotation for years to come.

Niagara College’s women curling team was 3-0 and the men were 2-1 when the school hosted its annual Knights Bonspiel at the St. Catharines Golf and Country Club

Both squads finished their pre-provincial tournament play with 9-2 records. The OCAA provincial championships will start Feb. 15 in Sault Ste. Marie.