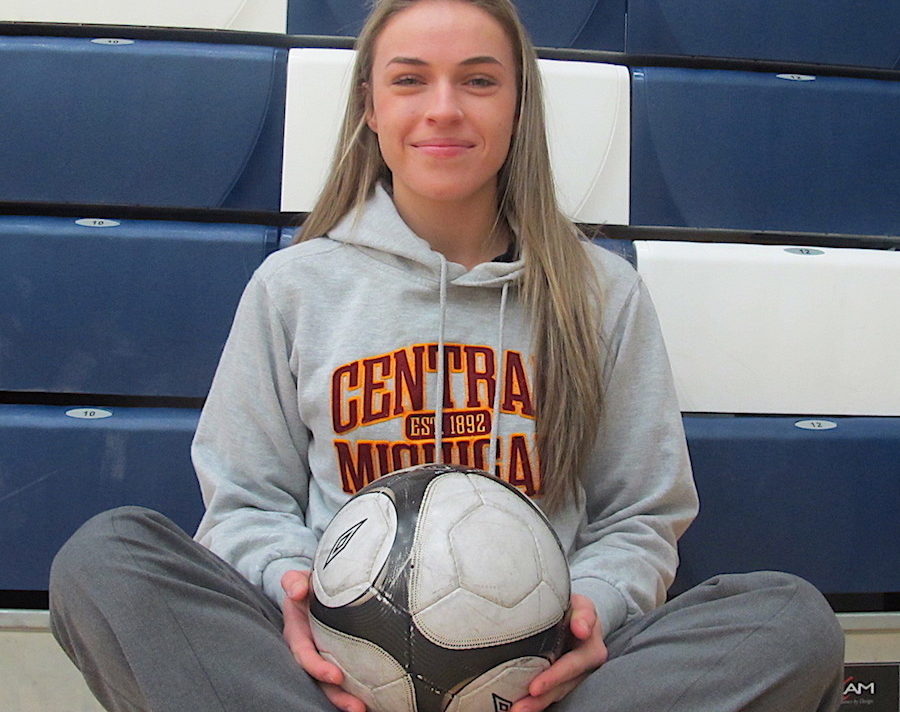 Alexandre Hebert had her future mapped out at a young age.

The St. Catharines resident is now in Grade 12 at Jean Vanier, but two years ago already had a full soccer scholarship to Central Michigan University in her back pocket.

“It was definitely really intimidating, just going on campus and seeing how university works being so young,” Herbert said. “I see all my friends going through it now and I think back when I had to go through those scary moments in Grade 9 and 10.

“I had the support from my parents and (remembering) the future is coming fast and it’s happening soon.”

Hebert, who plans to major in kinesiology, began getting interest from schools when she was in her first year of high school. She committed to Central Michigan in the summer following Grade 10.

She remembers being somewhat overwhelmed to make such an important decision at so young an age.

“I didn’t necessarily know at that point (what to look for). After I had gone for a few visits I started getting into what I need to be looking for and what is going to benefit me in the future and picking out little things like that.”

It didn’t take long for Hebert to feel comfortable with the school.

“My dad and I walked on campus and we had a really good feeling,” she said. “After meeting with the coaches and the girls everything sort of felt really good. I liked the campus and the facilities

“Compared to schools in Canada, everything is so big. They really take pride in their athletes and you can really tell. It’s exciting.”

She had interest from other schools and was also intrigued by Ivy League institutions.

She eventually settled on Central Michigan where she got a full ride — tuition, books, residence and a meal plan.

“It’s definitely a relief because I really haven’t had a chance to work because of all the soccer I play and school,” he said. “It makes me feel good my parents (Andre and Pamela Hebert) don’t have to pay for all that. It would have had to come out of their pockets.”

Hebert said she received a lot of positive feedback from the school which also helped her make the decision.

“At that time, it’s a lot of potential because you don’t know where the girls are going to be in two years,” she said. “I remember them saying the first time they saw me I reminded them a lot of a player who had been to the school and she left a really big mark on the school. Just in warmups my intensity and how driven I was and they really liked that. Even if I wasn’t skilled enough at that point, my work ethic and hustle. They could work on the skill part of it.”

Hebert, who is a striker, began playing rep soccer with the St. Catharines Jets when she was nine and is currently a member of the Stoney Creek Battalion. She was exposed to scouts through several showcase tournaments in the States.

Hebert was at Central Michigan a few weeks ago for an orientation camp with other freshmen and is well aware her time at Jean Vanier is quickly coming to an end.

“I definitely have a lot of feelings of excitement and nerves. I think realizing just how fast it’s coming, we’re almost finished our first semester and that’s pretty shocking,” she said. “I have good support at the school so that makes me feel more reassured.”