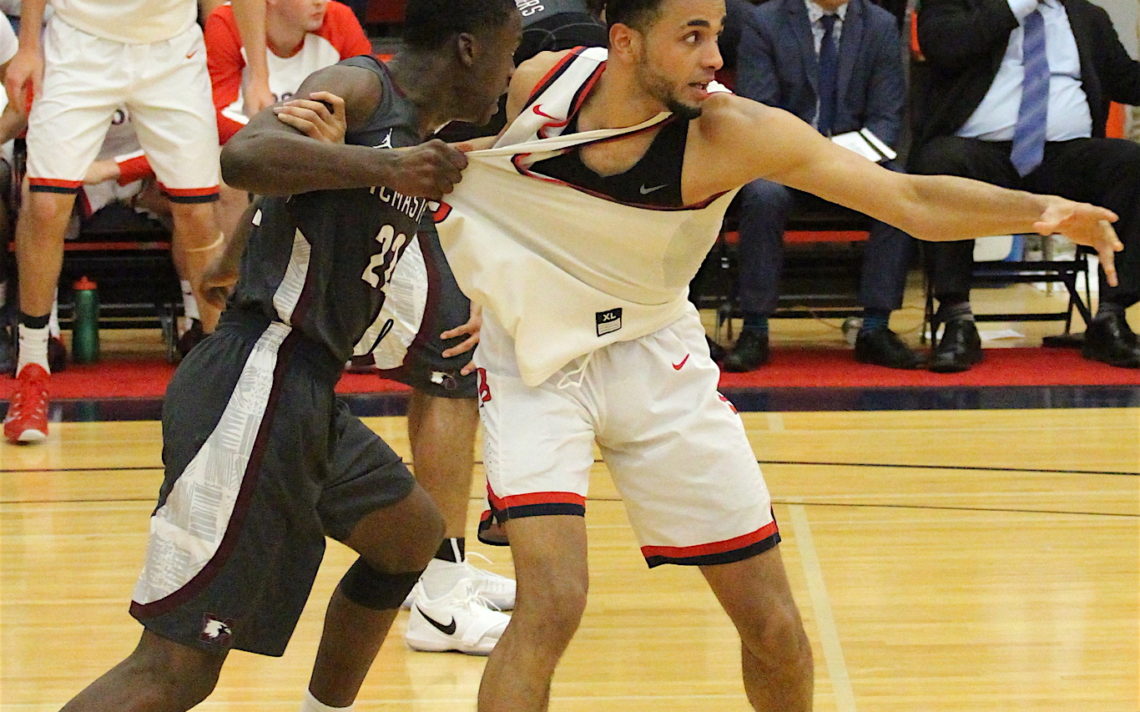 This is Day 8 of BPSN’s 12 Days of Christmas, a look back at some of our favourite stories from 2017. We hope you enjoy revisiting some of our top stories since our inception in September.

Dani Elgadi arrived at Brock University in the fall of 2013 as a talented but slender basketball player.

That fitness level was on full display Friday as the 6-foot-7 forward scored 23 points and grabbed 12 rebounds in a 96-56 plucking of the Memorial Seahawks (St. John’s, Nfld.) in exhibition play.

“I have stayed every summer and this summer our entire roster stayed,” Elgadi said. “There was definitely a lot of work put in and I feel great.”

Brock head coach Charles Kissi agrees there has been a significant physical change in Elgadi.

“He’s a man,” Kissi said. “When he got here, I asked him for three summers and he gave them to me. Hopefully he’ll reap the benefits this year and beyond.”

But before beyond there’s the goal Kissi and Elgadi set when the two first met in 2013. The shared quest was a spot in the national championships before Elgadi graduated.

“This is it. We have to get it done,” Kissi said “Every season we get closer and better and not just small jumps. Now we have to take another big jump and our expectations are to be playing in March.”

Elgadi has never lost sight of that final destination.

“That has always been my goal since the first year and you have seen it step by step,” he said. “We’ve put the pieces in place and in my fifth year I have one goal which is to bring a banner to Brock.”

Those pieces were on display Friday night as 14 players saw floor time and few — if any – looked out of place.

“We’ve got the luxury of going deep and it’s not just skill,” Elgadi said. “It’s trusting that the guys coming in next will follow the principles of what we want and what we want to do.”

Brock’s wealth of depth is a far cry from Kissi’s first year at Brock when his team of little or no depth compiled a record of 4-18.

“I have that 4-18 imbedded in my head and it’s not a place I ever want to go back to,” Kissi said. “We’re in a better place now and our culture is so much stronger. It’s going to allow us to do some special things this year.”

Looking at Brock’s roster, it seems like Kissi will struggle to find enough minutes for everyone who deserves to play.

“It’s not a challenge because all our guys will do whatever it takes to win whether they have to play 30 minutes or three minutes,” he said. “There’s not going to be anyone crying about playing time on our team because they go to war every day in practice and they understand what it’s all about.

“It’s a great position to be in my fifth year here and it’s where we should be.”

For Elgadi, those five years have flown by.

“I remember like it was just yesterday being here talking to you and now I am in my fifth year with just one goal in mind,” he said. “I have aspirations for after the season but I am not even going to talk about it until my goal is achieved.”

He has no plans to stop and smell the roses in his final year at Brock.

“I live in the moment and I savour every possession, my teammates and the travelling,” he said. “I love my guys and they know I love them but I want to get on the court, do my job, leave with a W and go to the next game. It’s a mindset that we all have.”