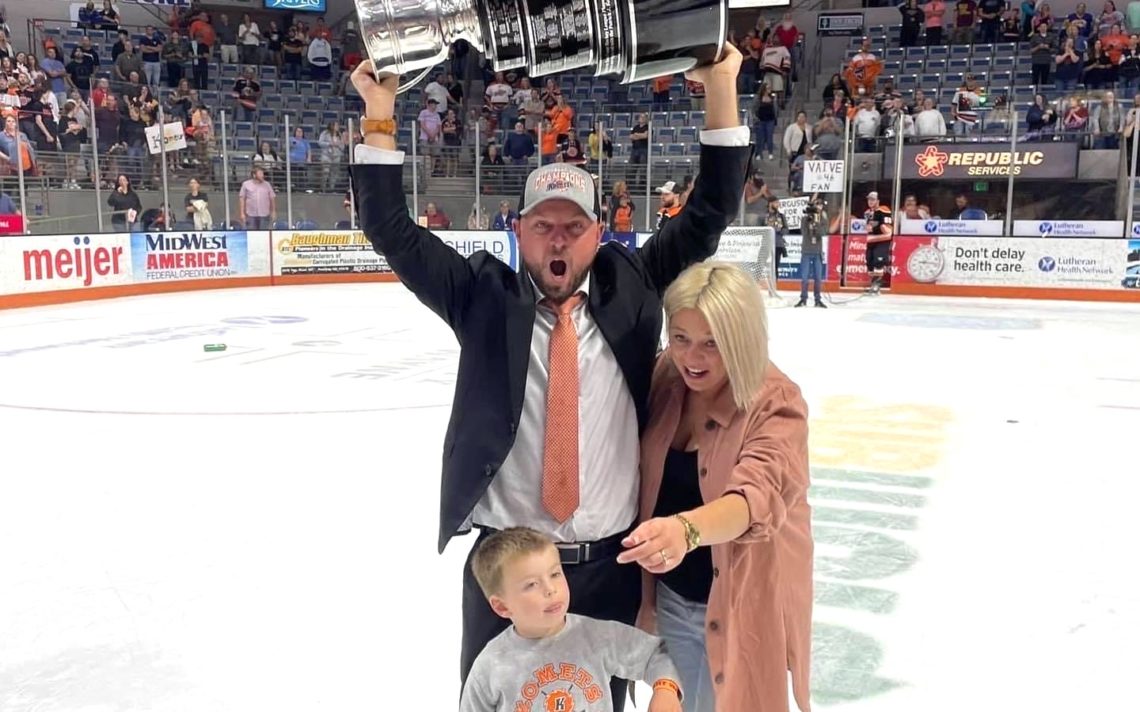 Ben Boudreau is following in his father’s footsteps.

The 36-year-old St. Catharines native and son of former National Hockey League coach Bruce Boudreau is carving out a solid career of his own behind the bench.

Boudreau recently earned his first major title as a coach, guiding the Fort Wayne Komets to a ECHL championship.

The former St. Catharines Falcons winger still has trouble putting into words how much the championship meant to him.

“It’s so tough to describe unless you’re actually in the building because there are so many different circumstances that went into it,” he said. “Anytime you win a championship it’s a great sense of accomplishment. We had a great group of people involved. It’s not just about one person.

“There is no single word or phrase to describe it until you’re living through the motions. It was incredible feeling of accomplishment.”

The Komets, with Thorold native Randy Gazzola and former Niagara IceDogs Stephen Harper and Blake Siebenaler on the roster, defeated the South Carolina Stingrays to earn the Kelly Cup.

“It was great having a chance to celebrate it on home ice with office staff and families,” Boudreau recalled. “To do it in a pandemic year when we didn’t know if we were going to play with limited fan restrictions when we’re used to putting in 9,000 on an average weekend, to finish with no restrictions, and no COVID cases in a cash-strapped pandemic year setting records for most people, you can’t really put it into words.”

Boudreau finished up his playing career in North America as a Komet in 2010, losing in the championship final that year.

“I remember the same feeling celebrating with people on the ice and confetti. This time it was pretty cool to be on the right side.”

“My dad was in the building when we won the conference title in overtime to send us to finals,” Ben said. “To have him in the building that he won championships in and he captained and coached was a pretty cool moment.”

Bruce Boudreau, who coached in Washington, Minnesota and Anaheim in the NHL, has settled in Hershey, Pa., where he owns an expansion club in the United States Premier Hockey League (USPHL).

“He’s having a great time with that,” Ben said.

Ben said he constantly picks his father’s brain about hockey.

“We’ve gotten closer every single day that I’ve been in the coaching business,” Ben said. “We talk two to three times a day. We have a great relationship and it’s a great asset to have someone in the family that’s been through it all.”

Boudreau’s junior playing career took off in 2003/04 as a member of the Falcons under rookie head coach Darryl Belfry, now one of hockey’s most influential instructors.

“I remember the best junior year of my life was when I was in St. Catharines with the Falcons,” Boudreau said. “There were so many great guys I grew up with playing together. Matt O’Brien was a great captain and Bill Buckle and a bunch of other guys on the team I will remember for a long time.”

Boudreau bounced around the junior and minor pro ranks as a player but coaching wasn’t always at the forefront.

Boudreau even had a stint with the short-lived Niagara News TV, where he covered local sports.

“There was always something about hockey that drew me to it,” Boudreau said.

Boudreau finally got behind the bench as an assistant with the Bakersfield Condors of the ECHL in 2013/14. He had also had a stop in Norfolk before finally landing in Fort Wayne as an assistant in 2017/18. He took over as head coach last season.

“Somewhere along the way I realized I was a pretty good coach and maybe I could make a career out if it and so far it hasn’t led me astray,” he said.

He has become well aware of the nomad lifestyle of a pro hockey coach.

“You have no clue where you are going to be and is the one industry you don’t want to get into if you’re looking for stability,” he said. “You have to be able to roll with the punches.”

Boudreau and his wife Karla rolled the dice last December when they purchased a home in Fort Wayne.

“We gambled on the fact we would have success and would be re-signed for the following season,” he said. “It’s a major gamble we took, especially that we’re expecting our second child in five weeks.

“It ended up working out perfectly. We put our chips on the table and played our cards and it worked out well.”

Boudreau reports is he currently in negotiations and has been given a verbal commitment he will be brought back next year.

Beyond that, Boudreau doesn’t hide his desire to keep moving up the ladder.

“No question, I think everybody wants to do that,” he said. “The big thing for me is I understand the way I am going to have to do it. I am going to put in a lot of time and climb the ladder. My dad didn’t make it to the NHL as a coach until he was 52. I’m 36 with a championship under my belt. I’ve got a lot of time to climb here.

“I know it’s a long road ahead and it’s good to have a goal and be ambitious. I just hope it happens at some point, sooner than later, but I understand I’m going to have to be patient.”

Boudreau plans to return home as soon as he can and bring the Kelly Cup with him so he can get a picture taken with it at Swiss Chalet on Fourth Avenue where owner Loreto Vetrone is a big hockey fan.

“There is a picture there with my dad and the Calder Cup,” Ben said. “I want to find a way to bring it back.”