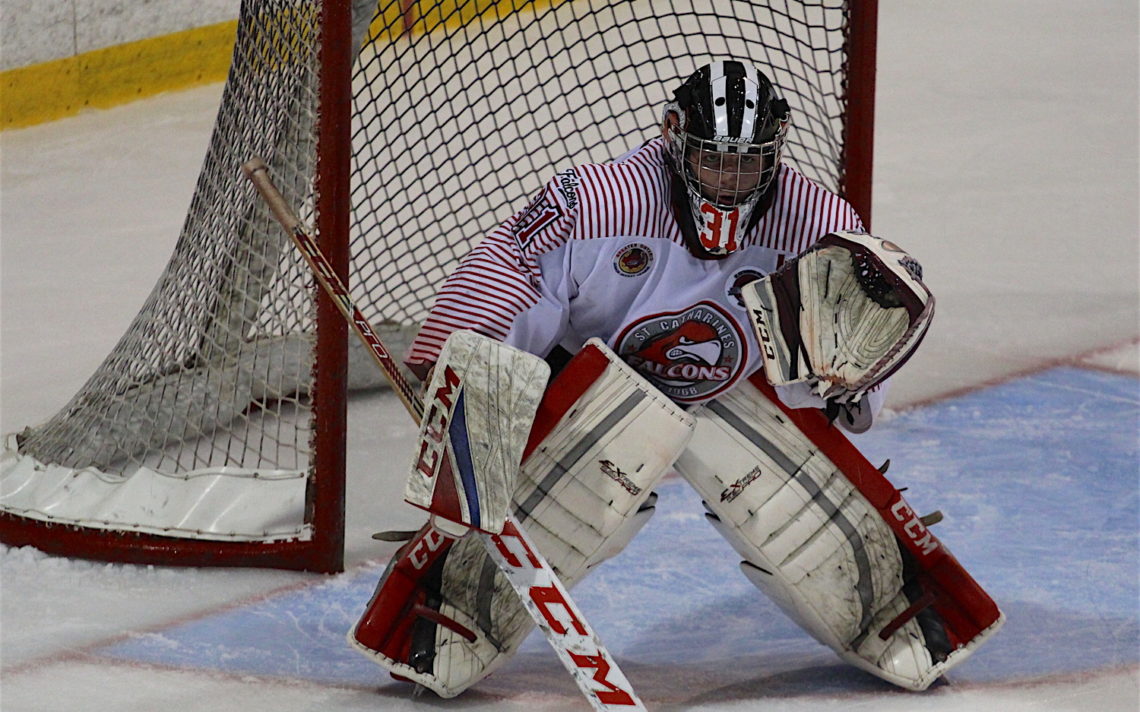 Owen Savory was peppered with 44 shots as the Thorold Blackhawks edged the St. Catharines Falcons in overtime Friday.

James Guest couldn’t have dreamed of a better way to return to Jack Gatecliff Arena.

“Obviously, that was unbelievable,” Guest said outside a noisy Thorold dressing room. “Playing here for two years and this being my home and playing against my best friends, it was a surreal feeling out there.”

Not only did Guest score the winner, but he did it in dramatic fashion, scoring on a breakaway from his own blueline when he picked up an errant shot from the point just as a Thorold penalty was expiring.

Guest then outraced a couple of Falcons and beat St. Catharies goaltender Owen Savory with a high shot.

That sent the Hawks over the boards in jubilation while the Falcons slowly made their way back to the dressing room after another sub-par effort.

“I saw the D man down and I started wheeling and the next thing I know I look up and there was no one there,” Guest said. “I’m the last guy to usually get that amount of time so I got my head up and started skating.”

Guest obviously has some bragging rights now over his former buddies, but said he’s not about to gloat.

Thorold coach Scott Barnes was much happier with the effort, 24 hours removed from a lethargic game versus Buffalo.

“We just brought our work boots,” Barnes said. “Last time we played these guys we gave up 10 goals. We can play these guys. We just had to find a way to put 60 minutes together. We still didn’t do it, but at the end of the day we pulled out a win.”

Barnes was happy to see his club rewarded.

“What it does is emphasize the things we are preaching, the little things,” Barnes said.

Across the ice, things weren’t quite so rosy.

“That was a really bad start for our team in the first period,” St. Catharines coach Dan Fitzgerald said after an extended meeting in his office. “That’s just unacceptable. We need to come here ready to play right from the drop.

“These teams we are playing are playing their best hockey against us and we need to understand there are no easy games in this league, no matter who you play.”

The Falcons have hit a rough patch losing three of their last four to fall to 9-3-0-1. They now trail Niagara Falls by a point for second place after the Canucks defeated Welland 6-1 Friday.

Fitzgerald is well aware a team’s character is often defined through tough stretches.

The Falcons emerged with a 3-2 lead after the first period. Each team collected a fluke goal. The Falcons opened the scoring when Joshua Chariot’s shot bounced off the end boards and off Thorold goaltender Anthony Tremonte’s leg to open the scoring. The Hawks later scored when Mitch Britton’s shot appeared to go through the mesh behind Owen Savory. Officials checked the net and awarded the goal but did not mend the twine.

The Hawks outscored the Falcons 2-1 in the second to head into the third period tied 4-4.

Falcons facts: Mike Davies (knee) and Jack Venneri did not dress for the Falcons  . . . Ryan Ellis, Jacob Mastrangelo and Camilo Rodrigue-Melo were scratched for the Blackhawks  . . . Davies, who is listed as week-to-week, was named the Golden Horseshoe offensive player of the month. Falcons goaltender Owen Savory was the goaltender of the month  . . . Dakota Miskolczi made his debut for St. Catharines after the Falcons acquired his rights from Fort Erie.

BPSN Star of the Game: Former Falcon James Guest with the winner in OT.

Up next: The Falcons are in Buffalo Tuesday. The Blackhawks are in Welland Sunday.