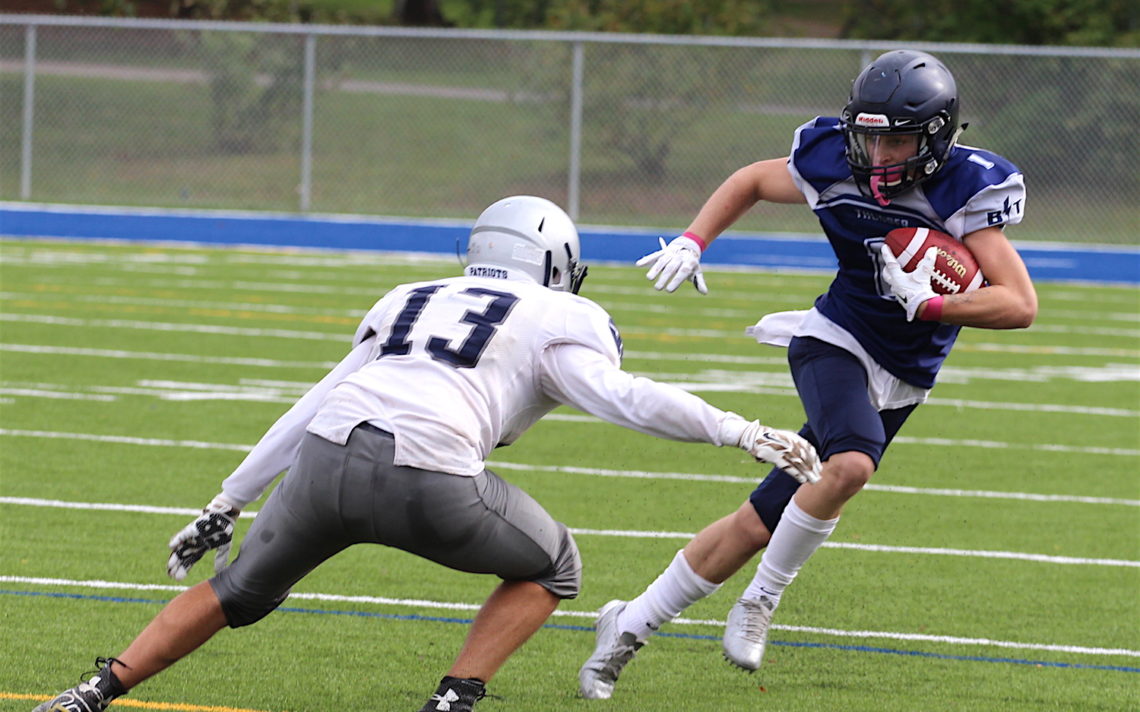 The Saint Paul Patriots improved. to 3-1 in NCAA senior football action Friday with a 10-7 victory over the visiting Blessed Trinity Thunder (3-1). Photo by BERNIE PUCHALSKI.

The Blessed Trinity Thunder’s quest to roll all the way to an Ontario Federation of School Athletic Associations Bowl hit a bit of a roadblock Friday afternoon in Niagara Falls.

The Thunder (3-1) were knocked from the ranks of the unbeaten in Niagara Catholic Athletic Association play following a dramatic 10-7 loss at the hands of the Saint Paul Patriots (3-1).

Leading 1-0 at the half, the Patriots expanded their lead with six minutes left in the game when Will Schmahl connected with Jon Haw on a five-yard scoring pass. But the Thunder were given a glimmer of hope when Jacob Kohut blocked the convert attempt to keep the score 7-0.

On the ensuing possession, BT marched the ball 46 yards down to the Saint Paul 19-yard line before turning the ball over on downs. The Patriots went nowhere on two plays and then the Thunder’s Daniel Marinelli blocked Saint Paul  punt and recovered it on the Patriots’ four-yard line. Two plays later, Isaac McAlonan tied the game on a tough run up the middle.

With 48.9 seconds left in the game, the Thunder kicked off and Saint Paul took possession on its own 30-yard line. Schmahl connected with Haw on a 41-yard pass and then moved the Patriots to the Thunder four-yard line thanks to a 37-yard completion to Enzy Youyoute. Three plays later, Nathan Dunleavy booted a 20-yard field goal to give Saint Paul a 10-7 lead with 18.7 seconds left in the contest.

Game over? Not even close.

The Thunder moved to the Saint Paul 40-yard line with a passing play and then Dunleavy had to make a game-saving tackle on McAlonan at Saint Paul’s 15-yard line as time expired.

“The kids played hard and you can’t really fault them for wins and losses. They made plays and we made plays but they just made one more play,” Blessed Trinity coach Mark Antonelli said. “We will see then again.”

The Thunder will need to regroup quickly.

“We have Notre Dame next week,” Antonelli said. “It’s done, it’s over and there’s no point them watching the film. That’s something the coaches will do.”

Saint Paul coach Rick Oreskovich gave his team credit for playing the entire 60 minutes and sticking to the game plan.

“Coming back at the end was the result of great individual plays by our quarterback, linemen and receivers,” he said. “And our defence played very physical the whole game.”

He was impressed with the Thunder.

“They are well-coached and they played tough the whole game,” Oreskovich said. “They were physical and they attacked.

“It was a test of our will and we will probably see them down the road.”

Oreskovich was delighted with how Schmahl engineered the comeback.

“He showed poise and calmness and he made big plays at the end.”

The 17-year-old quarterback, who is in his second full year at quarterback for the Patriots, admitted he would have been frightened to death last year if he had been asked to do what he did Friday.

Schmahl feels he has taken strides this season in becoming a better quarterback.

Friday’s win by the Patriots was extra special because it was opening day for the school’s artificial turf field.