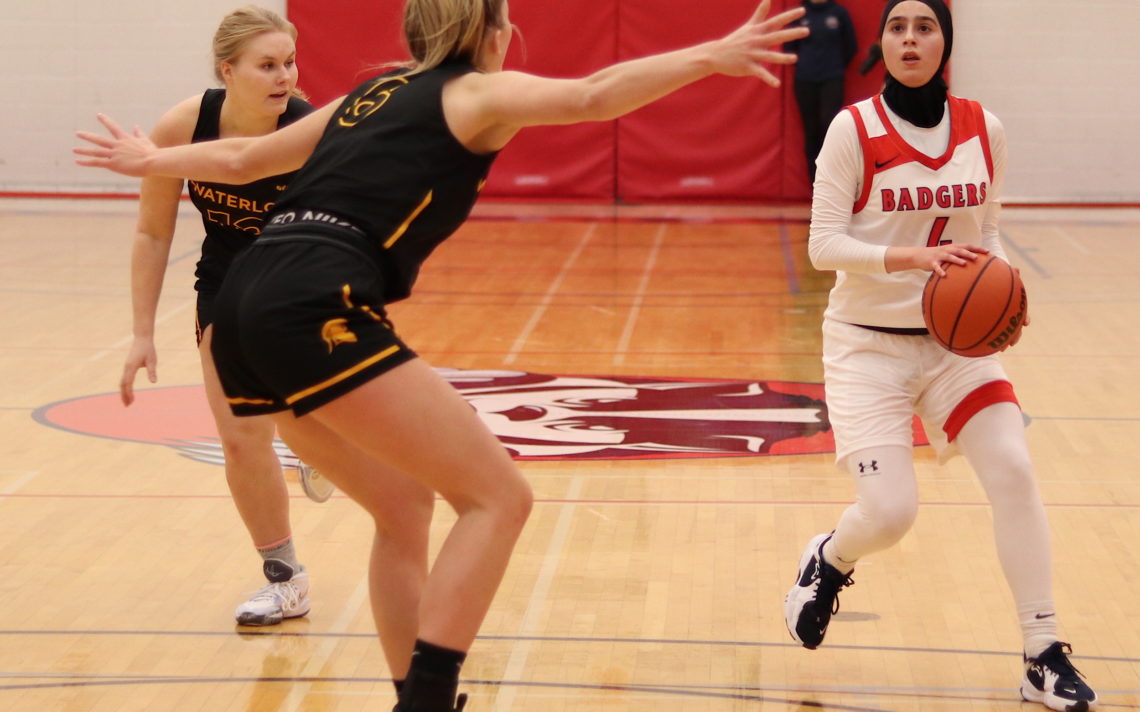 Noor Bazzi has found a home with the Brock Badgers women’s basketball team.

The 22-year-old Windsor native started her post secondary basketball career at St. Clair College in Windsor before moving to the University of Windsor last season.

“It wasn’t for me but I knew a couple of girls on the Brock team (Theresa Brown, Audrey Ntetani Umba and Victoria Lawrence) and I spoke to them and I spoke to (head coach Mike) Rao. I felt right away that it was the perfect match,” the social sciences major said. “I had my visit and now I am here.”

At her first Brock practice, the 5-foot-9 guard knew she had made the right choice.

“I felt Rao’s coaching style really fit with my playing style. As soon as I came to practice, he didn’t think twice about me being new. He put me in right away and made me feel like I was already part of the family and that was a huge thing for me,” she said. “I didn’t want to be the outcast or something like that. Having him and everyone accept me was perfect.”

Bazzi describes her style of play as unselfish.

“I would rather get an assist than score myself and Rao is very much into team-oriented basketball. He is not one-on-one go and score,” she said. “He is move the ball and if you are open you are going to get your shot. It’s just be patient and that was a huge part for me because other teams I have been a part of it’s if you have the talent use it in the game and if it works, it works.”

Bazzi also brings a bit of an edge and passion to her game.

“You cannot come into a basketball game and not be passionate about what you are doing. You have to battle for every possession on and off the court,” she said. “When I am on the bench, I am yelling and losing my voice. On the court, I am going for loose balls, helping my team on defence and I am just doing my part.”

She is continuing to work on her game.

“I think I need to do a better job of staying calm, moving the ball better and getting my feet set when I am shooting the ball.”

Through six games this season, Bazzi is third on the team in scoring, averaging 8.2 points per game. She is also averaging 20.7 minutes of playing time and 3.3 rebounds per game.

She went in the season with no preconceived notions about playing time.

“I am thankful for any minutes that I get and honestly I love the sport that I am playing. If I want to play more, that is on me and not Rao,” Bazzi said. “If I get him to trust me and put me on the court, that’s perfect. If not, I have to do better and do whatever he wants.”

Rao is happy with Bazzi’s performance this season.

“She is getting there. She is good,” he said. “I like her effort and her intelligence on the court. It’s just getting used to the nuances of how we play.”

“You have to have that killer instinct to play,” he said.

Brock fell to 4-2 in Ontario University Athletics regular season play with a 66-53 road loss to the McMaster Marauders Saturday.

Top performers for Brock were: Madalyn Weinert with 15 points and eight rebounds; Theresa Brown and Noor Bazzi with nine points; and, Madison MacInnis and Audrey Ntetani Umba with five points.

The Badgers are at York next Friday before returning home Friday, Dec. 2 to host the Carleton Ravens.