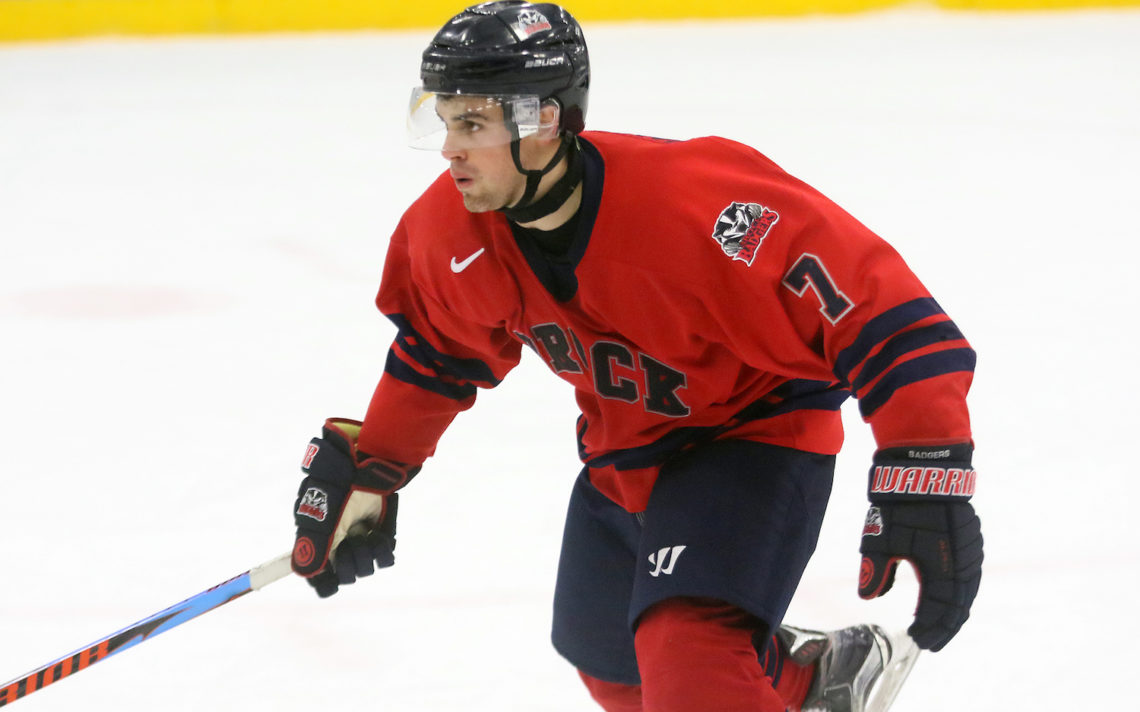 The Brock Badgers take on the York Lions in the OUA West finals beginning Wednesday at York. Photo: Special to BPSN Sports

The Brock Badgers men’s hockey team has come a long way this season.

The Badgers began the year under new coach Marty Williamson with four straight losses and were searching for an identity when Williamson called a team meeting.

The former Niagara IceDogs bench boss didn’t mince words and laid it on the line.

“We have 11 seniors on this team and (I asked them) what did they want to get out of it?” Do they want to be coached or do they just want to write it off and we can go recruit a new team for next year,” Williamson said.

From that day on, Williamson said the Badgers became a team.

“We played everybody tough and when we did lose, we knew exactly why. There wasn’t this mystery to the team anymore. We knew our identity and the guys bought into that.

“I give them a lot of credit and they realized how much work it is each night to get victories. It’s cliches but it’s 100 per cent true. We just didn’t work hard enough as a team and now you talk to the coaches we’ve beaten and they’re telling me how hard we are working.”

Game 1 is Wednesday at York with Game 2 Friday night at the Seymour-Hannah Sports Complex at 7:15 p.m.

Should the Badgers prevail, they would advance to the USports National Championship and also host the Queen’s Cup OUA finals for the first time in school history.

“It’s a special position to be in,” Williamson said. “We know we have a tough game Wednesday and we can’t get caught up in any of that stuff. We have to strictly stick to what we do and get ourselves in a bubble here and just worry about Wednesday and how can we play our best game.”

The Badgers finished the regular season with a pedestrian 14-14 record but have played their best hockey in the playoffs, knocking off Guelph and Laurier in the first two rounds.

“York gives us another animal now. They don’t give up much and we’re going to have to find ways to get to three or four (goals) or it’s going to be tough,” Williamson said.

The Badgers have taken a scoring-by-committee approach this season.

“We are a true four-line, six-defence team. We rarely shorten the bench and it’s always been a different guy for us,” Williamson said. “We really trust now as a team that anybody can do it, anybody can chip in and get that goal for us when we need it.

“It’s been a huge winning point for this team.”

In fact, Williamson says the Badgers have so much faith in their depth they consider it an advantage when other teams shorten their bench.

“We feel good on the bench when other teams go down to three lines. We feel confident that there is no separation from one to four. I don’t have a first line. We have balance in our 12 guys and it’s worked for us.”

That depth will be tested as defenceman Dexter Weber is out with a hand injury. He will be replaced by Dallas Rossiter.

The Badgers ace in the hole is goaltender Clint Windsor, who has been the backbone of the team all season.

“You look at any team through history, that is the most important position and you need him to be hot at the right time and Clint has had a great season for us,” Williamson said. “When you can be a non-fragile team because every mistake doesn’t cost you a goal, there is more confidence for a team and Clint gives us that great feeling that he’ll be there for us.”