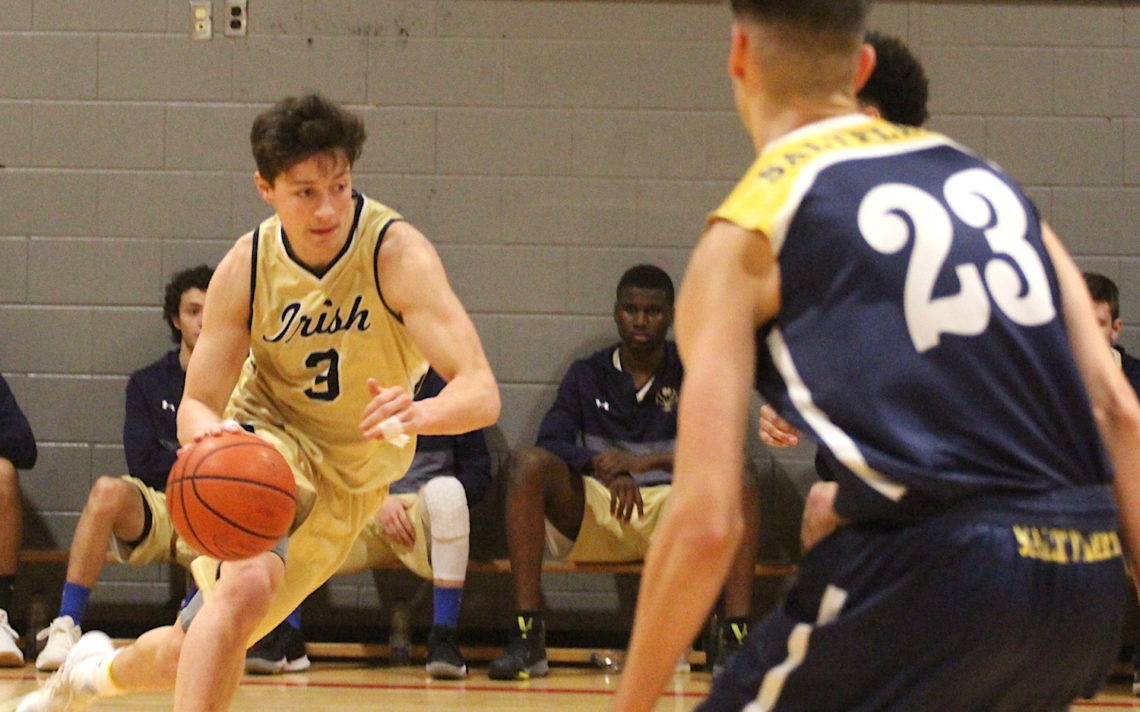 The two 12B students played key roles as the Notre Dame Fighting Irish senior boys basketball team calmed the Saltlfeet Storm 80-68 in the Southern Ontario Secondary Schools Athletic Association AAA championship game. Gruarin had 17 points and Graziani 12 as the two added a SOSSA basketball crown to the SOSSA football title they won last fall. Joining them as SOSSA football and basketball champions were teammates Rovenston Jean-Baptiste, who had nine points in the game, and Jason Richard. 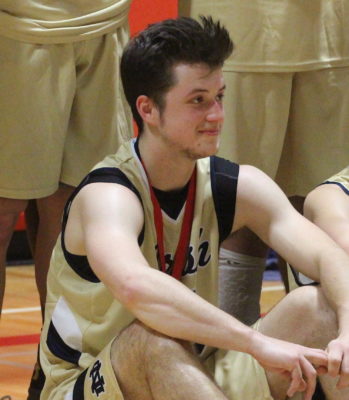 “It is pretty awesome,” Gruarin said. “I didn’t expect to come back and win both and it’s a great feeling.

“It makes it all worth it.”

He used to play soccer but has no plans to make a comeback with the Notre Dame soccer team and try for a SOSSA hat trick.

Gruarin admitted he wasn’t sure his team had what it took to become SOSSA champions.

“I knew we would likely play Saltfleet on our way here but I wasn’t really sure if we could beat them,” the six-foot guard said. “I knew this could be my last game so I figured I would come out and give it all I got for the team and it ended up working out for us.”

Gruarin felt his team’s persistence is what made it successful.

“We never give up,” he said. “We keep playing our best and we give it everything we’ve got every time we play.

“That’s all that matters, I guess.”

After accepting their SOSSA medals and posing for a team photo, Irish head coach Mark Gallagher huddled with his team to reflect on a job well done.

“We started shooting in the spring before school and we got together a couple of times in the summertime and we talked about all the hard work had paid off,” he said. “With everything else that has happened, that was the lesson we were trying to teach.

“If you put in the time and hard work, good things happen to you.”

Gallagher’s team had an up and down year but saved its best for when it mattered the most.

“We’ve had games where we struggled late and made mistakes that we shouldn’t have made and, hopefully, we were learning the whole time for today,” he said.

Gruarin recalled some of those struggles.

“We played Saint Paul a couple of times when we had terrible finishes and we got a little unlucky in the Tribune final. The last few minutes didn’t work out very well,” he said.

Gallagher got contributions from a lot of players: Everyone in the rotation played great defence; Gruarin hit five threes in the game; Graziani and Jean-Baptiste contributed 12 and nine points; 12B Braidon Moore netted 18 points, including a fadeaway three-pointer with 1:52 left that gave his team a 10-point lead; Grade 10 player Andrew Zezela had a rare four-point play in the first quarter; and, the Irish hit 14 of 16 free-throw attempts in the final 1:36 of the game.

“We couldn’t take any possessions off today.”

Saltfleet, which entered the game with a 26-6 record, was an OFSAA quarter-finalist last year.

BPSN Star of the Game: Notre Dame’s David Jones with 18 points, including all 10 of his team’s points in the third quarter when no one else’s shots were falling.

Up next: Notre Dame advances to the OFSAA AAA basketball championships March 5-7 in Windsor.