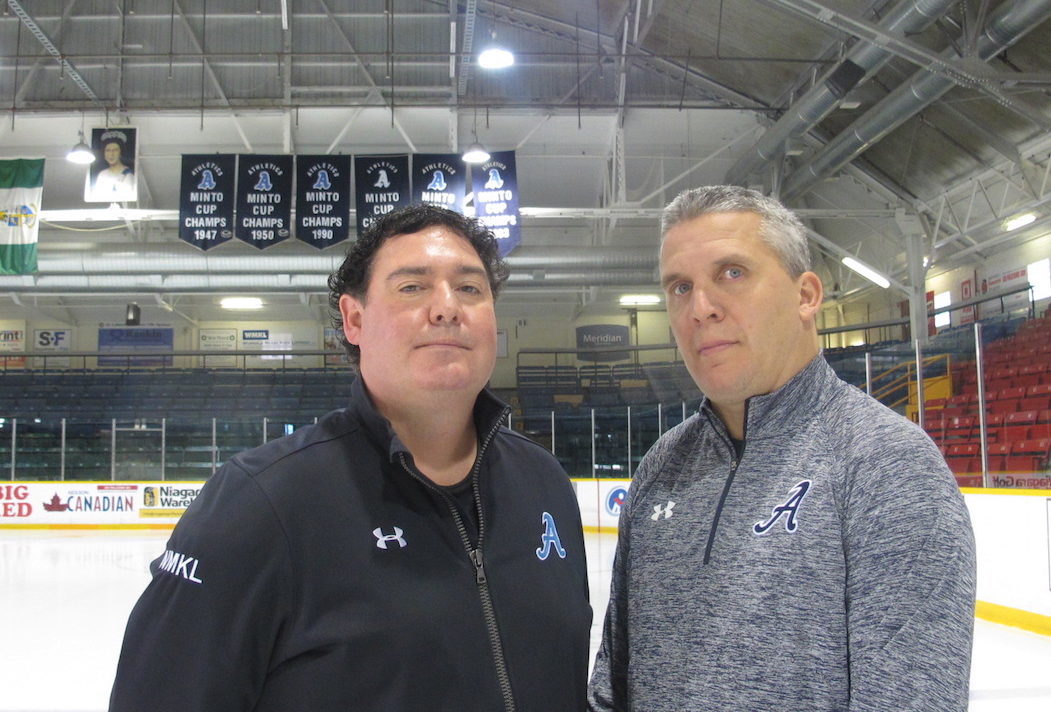 This is Day 3 of BPSN’s 12 Days of Christmas, a look back at some of our favourite stories from 2017. We hope you enjoy revisiting some of our top stories since our inception in September.

Jeff Chcoski is the new general manager and Steve Toll the new coach of the St. Catharines Athletics. PHOTO BY: BILL POTRECZ

The St. Catharines Athletics’ all-time leading scorer couldn’t say yes fast enough when he was approached to be the new coach of the franchise.

“I was really excited when I got the call,” said Toll, a 43-year-old St. Catharines native.  “Anytime you get to come home to do anything it’s an unbelievable feeling. My parents were excited. I was excited.”

Toll replaces Sean Allen behind the bench. He will be joined by new general manager Jeff Chcoski, a 44-year-old St. Catharines native. Chcoski was Toll’s assistant last season in Mimico.

“It’s an honour to be part of this organization again, so rich in its history and to be doing it in the city I grew up in, it’s an opportunity I couldn’t pass up,” Chcoski said.

A’s president Paul Coates said the club’s failure to make the playoffs last season weighed heavily in the decision to make a change.

“We put a lot of time and energy into what we do. There were some difficult discussions that took place and in the end, this is what  became of those discussions,” he said.

“Steve’s athletic and winning ability speaks for itself. He’s fiery and intense but his players love to play for him and we could not say no to that opportunity,” Coates said.

Toll brings an outstanding pedigree to the position.

In his 14-year National Lacrosse League career, Toll won five NLL championships, four with the Toronto Roc and one with the Rochester Knighthawks. He was a transition specialist and in 2007 was awarded the first ever NLL transition player of the year award.

Toll also had one of the greatest junior lacrosse careers in history finishing his five-year tenure with the A’s as the all time leader in assists (355) and points (607) (regular season and playoffs combined).

Chcoski saw first-hand in Mimico how successful Toll was. The franchise moved from Mississauga and within three years qualified for the Minto Cup.

“Steve’s lacrosse knowledge is out of this world,” said Chcoski, a former assistant coach for the St. Catharines Falcons junior B hockey team. “People know Steve as a scorer. They don’t know him as a coach yet. The way he runs a practice and how he prepares is very strong.”

Toll believes these is no substitution for hard work.

“We have to come to work hard every game,” he said. “Hard work will beat talent every time. We have to instil that and come back and get the crowds back out here and make the playoffs.”

Toll would love nothing more than to see the A’s return to their glory years. Toll was a member  of the 1991 Minto Cup champion Athletics.

“I think it’s always in the back of your mind you want to get to the big dance but even Mimico their goal was three years and they got there,” he said. “Some teams have never gone to a Minto Cup. It’s a hard thing to do. We have to instil a team effort and you have to believe in each other.”

Toll said it was hard to leave Mimico, but the lure of the double blue was too strong.

“They have an unbelievable group of kids and they have a first class organization all the way and they treated me first class for three years,” he said. “We started out as Mississauga and we were 0-20. We had a sub-par first year and two great years after that.

“I have nothing but respect for that organization.”

Chcoski believes his time in Mimico primed him for this opportunity.

“I’m just feeling honoured to be asked to be part of this franchise,” he said. “I felt so lucky because if things didn’t go the way they did in Mimico I wouldn’t be in this spot now.

“I was honoured but I don’t know if it’s even completely sunk in yet. I think for years and years and years, for 22-23 years I’ve always been a piece of the puzzle. Now, I’m putting the puzzle together.”

Chcoski has some specific ideas on what he wants the 2018 A’s to look like.

“Obviously, I want to put together a team that can score. We’re going to score. I want to be able to transition the ball well and play good, tough D and make sure we keep the shots to the outside,” he said. “This team is full of leaders. It’s just a matter of getting them all together and make sure it all works out.

“We want to be able to make sure we are a playoff team and have their eye on the prize, but also make sure it’s also a process.”

Chcoski has already began planning for next season.

“I’ve contacted every single player, management and directors and the coaching staff. My door is always open, whether it’s lacrosse or life in general. I’m there for you,” he said.

Rob Taylor and Ian Rubel will return as assistants with one more position behind the bench to be filled.