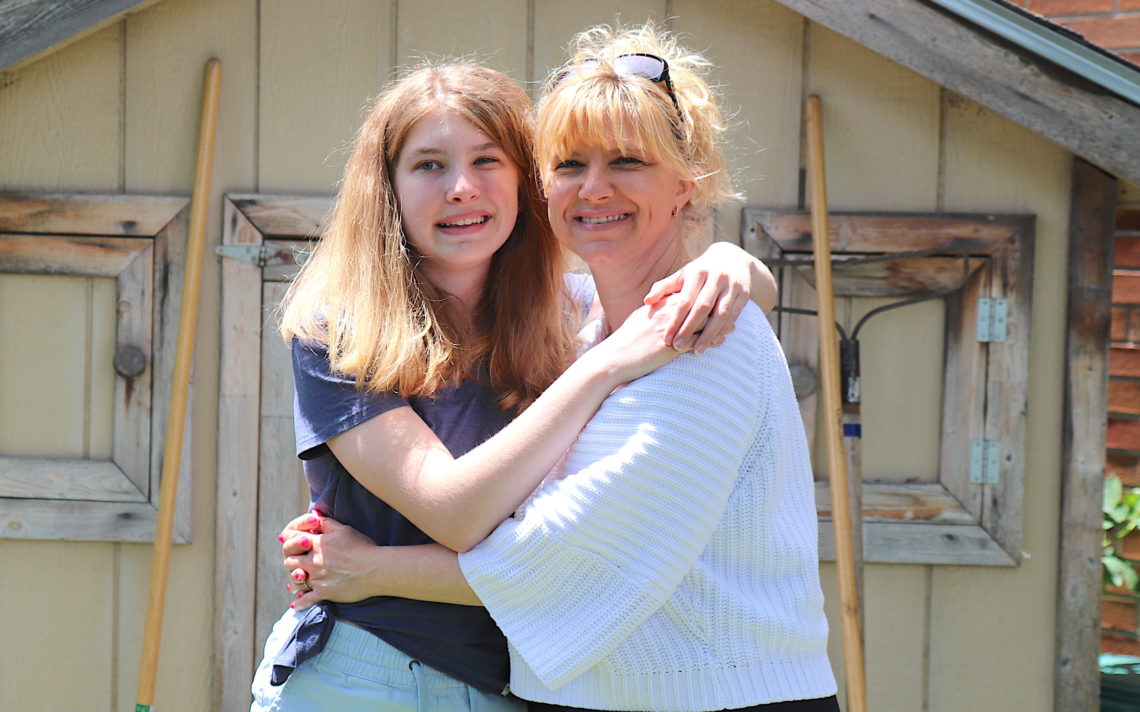 It was the Sunday of the Canadian Secondary Schools Rowing Association championships and the novice women’s coxed quad final was crossing the finish line at the Henley grandstand.

In third-place was an A.N. Myer crew made up of Zenith Taylor, Lauren Mills, Mackenzie Murray, Roberta Stark and coxie Angelina Greco.

“We are at the fence screaming our heads off and the people who knew were crying,” Myer rowing staff advisor Nico Marino said. “Most of the fans in the stands had no idea.”

The crew came on to the grandstand dock to get their medals and have their picture taken.

“They are yelling and screaming and I have a video of the girls putting the medal on her (Greco). It was almost like they were ignoring her because they all wanted to put the medal on her together. They did that and it was fantastic.”

Marino could hear people wondering why Greco was wearing a life jacket and, in the moment, he wished he could turn around and tell them why.

“They had no clue what they were seeing. It was crazy.”

Greco, who nine months earlier was fighting for her life after suffering multiple brain bleeds, couldn’t believe it when she heard people in the grandstand chanting her name.

“They were all cheering for me and I thought they should be cheering for the team,” the Grade 10 student said. “I was thinking ‘Thank you but everyone else is there too.’ ” 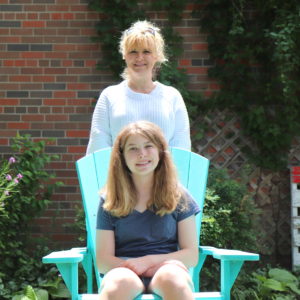 Six weeks prior to the CSSRA championships, Myer’s coaches, Wernher Verbraeken, Tony Arcuri and Joe Iacobocco, asked her to coxie the boat.

“It was the best thing anyone could have done,” Angelina’s mother, Sandra Greco, said. “We discussed it and we thought it would be great to get her back on the water because that is what she wanted.”

Angelina was over the moon when she heard the news.

“I thought, ‘Thank God’ because I really needed something.”

There were obviously a few challenges along the way. On the Saturday morning before weigh-ins for the heats, Angelina suffered a mild seizure.

“She didn’t want to let her crew down and she said she was going on the water. I think we were all afraid at that point,” Sandra said.

But Sandra and her husband, Lui, knew it was important to let their daughter have the opportunity to race at Schoolboy.

“The only thing we could do was let it happen,” she said. “They told us we had to make sure her rescue meds were on her and that the boats were aware. You notice in the video that you see a boat not too far away from them.”

Marino was emotional as he watched the race unfold.

“Before they came through, I was sitting by myself thinking that if this kid comes first, second or third there is no way we can let this go. Someone had to say something.”

As the race neared the finish line, Marino was texting Myer phys-ed head, Dave Shaw, and telling him that they had to recognize Angelina at the school’s athletic awards banquet.

“It is unbelievable what this kid has achieved in such a short amount of time after what she went through,” he said.

Shaw agreed and Marino was thrilled to be able to present Angelina with The Competitor Award in recognition of her resilience and fighting spirit.

“She got a standing ovation that night and I don’t think it mattered what I said. I don’t even remember what I said. I have never been so emotional.”

Angelina’s medical odyssey began last Aug. 11 at her cousin’s house. She called her mom and said she was feeling exhausted and Sandra told her it was likely because she was coming off a month of training on the water and waking up at 5:30 a.m. Things quickly went from bad to worse.

“She had a headache and the headache became so bad and so horrible she was screaming,” Sandra said.

An ambulance was called and took her to Greater Niagara General Hospital where a CT scan confirmed a brain bleed. She was bleeding in four different places.

“At that point, they didn’t know if she was going to make it and we had to get her to Hamilton,” Sandra said.

Angelina was rushed to McMaster Children’s Hospital for emergency surgery. A portion of Angelina’s skull the size of Sandra’s hand was removed to make room for the swelling.

Angelina spent about two weeks in a coma before she was stable enough to be moved to a ward room.

It was heartbreaking for the entire family but they were ready to help in any way they could.

“This was a Grade 8 valedictorian who loved to speak in front of people, be the one to inform and be helpful in any way that she could,” Sandra said. “As a teacher and a mom, I went out and bought a magnet board, an ABC board, animals and everything you would do for your toddler.”

In the ward room, Angelina’s parents heard some mumbling but the doctors didn’t believe it.

“They said it wasn’t possible at that stage of the game,” Sandra said.

One afternoon, Angelina reached for her phone, turned it on and went on Snapchat. On Aug. 25, she was able to wish her father a happy birthday.

“It was incredible and from that point forward she was doing five-word and six-word sentences at a 14-year-old level of language,” Sandra said.

On Aug. 31, Angelina was transferred to Holland Bloorview Kids Rehabilitation Hospital where she would have to work hard to eat, drink and walk again. During the week of Sept. 16-21, she developed an infection in her brain fluid and was moved to Sick Kids Hospital.

“They expected some type of regression but there was no regression, only progression,” Sandra said. “She kicked butt even with four days of a fever of 40 (C).”

Angelina went from a wheelchair to a walker in mid-October and then started walking on her own. She was given therapy in the morning and studied math in the afternoon.

On Oct. 31, Angelina went back to McMaster for more surgery and doctors put the piece of skull back in place.

When the eight-hour surgery was complete, doctors were giving her parents a rundown of how things went when Angelina awoke.

“She asked the surgeon if the bone flap was back and he said yes. Then she said, ‘Great. Can I row now?’ ” She went back to sleep and everyone was amazed,” Sandra said. “The doctors all looked at us wondering if they could laugh and we all had a good laugh.”

“I absolutely love rowing. It is my sport and I have done it since I was 10. This is something that I love and I wanted to do it again as soon as possible.”

It was that love of rowing that got her through the tough times.

Sandra credits rowing for helping motivate her daughter through the recovery.

Described as a medical phenomenon by her doctors, Angelina was released from Holland Bloorview Nov. 28 and was back in school Nov. 29 before another surgery at McMaster Dec. 2.

“She only wanted to get back to rowing and back to school. That is all she cared about,” Sandra said.

The recovery is ongoing.

“Right now we are waiting for her fingers to wake up. They have told us it will be a two-year process but she has come through a number of different stages in a matter of months,” Sandra said.

“She is alert for them and she can talk us though them even though we are trying to talk her through them,” Sandra said, with a laugh. “She is telling us that she is OK and she is talking herself through it.”

Angelina has returned to train with the Niagara Falls Rowing Club and is there four days a week. She can’t row because her right hand won’t allow it but that doesn’t prevent Angelina from working out on an erg. She is back in her happy place.

“I like meeting new people, getting on the water and there is so much beauty out there,” the 14-year-old said.

She is thankful to have the Niagara Falls Rowing Club in her corner.

She admits it wasn’t easy to get to the point she is at now with her recovery.

“I have gone through the journey now and I just have to keep going forward with it.”

Her long-term goals are to get into Harvard and row for Canada at the Olympics. In the short term, she has one target in mind.

“I want to get into a single again and that is my goal. I absolutely love singles and doubles because I am not really a four or an eight girl. I am my own kind of girl.” 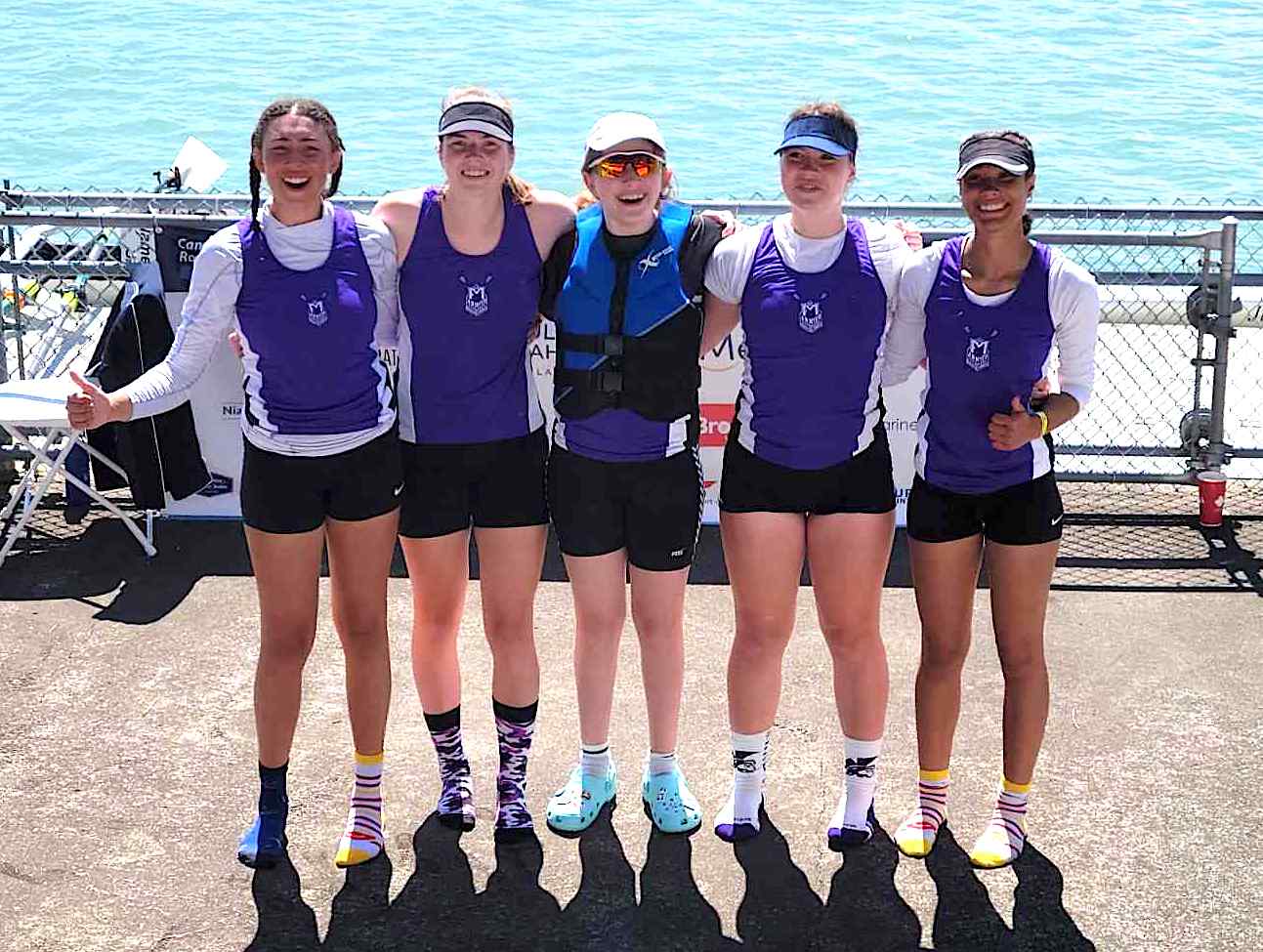