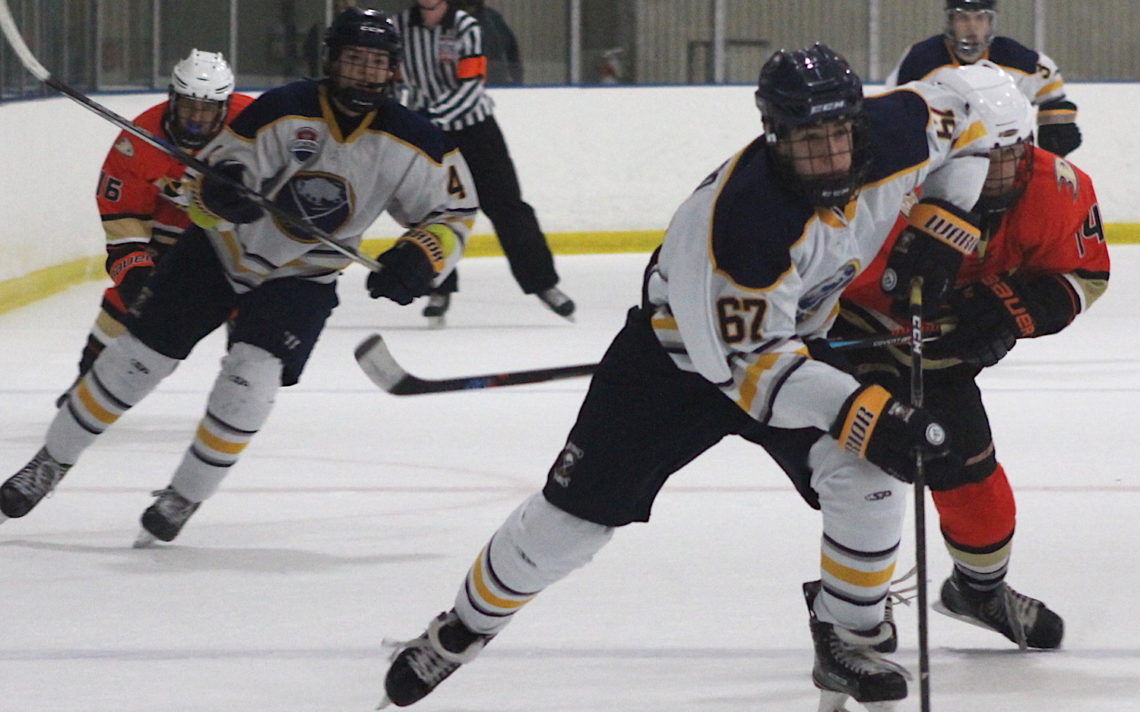 Welland native Colby Ambrosio was selected in the forth round of Saturday’s draft by Ottawa. He has committed to play NCAA scholarship hockey at Boston College but now says he is undecided. Photos Special to BPSN.

Colby Ambrosio was likely one of the few 15- to 16-year-old Niagara-based AAA hockey players not glued to a computer watching the Ontario Hockey League Priority Selection unfold Saturday.

The 16-year-old Welland native was in the dressing room between periods of a game between the Buffalo Junior Sabres under-16 team and Shattuck-St. Mary’s. The Junior Sabres would end up winning the game 4-2 with Ambrosio contributing an assist.

“We have a kid on our team who was injured and he was watching it on his phone. He came running into the room and he screamed Ottawa.”

The Ottawa 67s selected the 5-foot-9, 160-pound centre 66th overall in the fourth round, making the former Notre Dame student the second-highest drafted player from Niagara in this year’s draft. St. Catharines native Spencer Smith was chosen in the third round, 47th overall by the Guelph Storm.

Ambrosio would likely have been drafted higher if not for the fact that he has committed to attend Boston College and play NCAA Division 1 scholarship hockey. 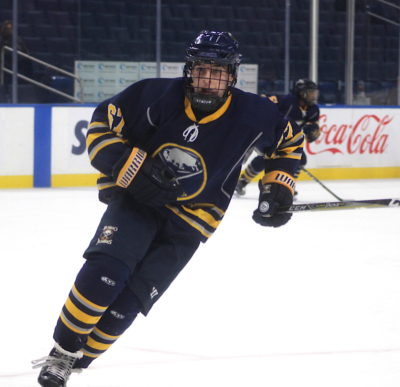 He received glowing reviews for his play on the SB Nation College Hockey website.

“He has a really quick release and good hands overall. He can fly,” the website reported. “He’s quick to beat defenders wide. His stick skills are good and he can simply finish.”

Ambrosio is flattered Ottawa selected him despite his interest in Boston College.

“When I was a kid, I didn’t know much about the NCAA and a kid growing up in Ontario you always dream of being selected (in OHL draft),” he said. “It was nice to see my name appear in the draft.”

Ottawa called after drafting him and Ambrosio said while he’s leaning towards the NCAA, he’s undecided at this point.

“When I was educated on the NCAA, I was amazed,” he said. “And when I went to see Boston College, it was amazing.”

The NCAA appeals to him because he feels it will provide him with more options in his future.

“No one is ever guaranteed a ride to the NHL and if it doesn’t work out, schooling is a great backup plan to get a diploma and get a good job.”

That being said, hockey is his first career choice.

Ambrosio played the 2016-17 season with the Southern Tier Admirals before joining the Buffalo Junior Sabres this season. 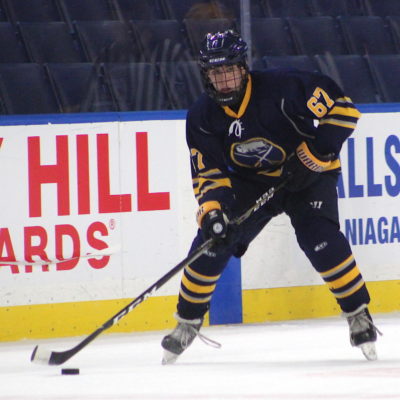 “I have been training at HarborCentre with the Academy of Hockey there and I really liked what they (Junior Sabres) had to offer,” he said. “I felt it was right for my development to come to their side and join the Junior Sabres.”

“I feel my defensive game has gotten a lot better. You are never going to be considered an elite player if you can only play in the offensive zone,” he said. “You have to be good on both offence and defence so that your team can rely on you.”

He has also been learning how to play against bigger and stronger opponents.

“It means playing quicker, making quick decisions and getting stronger at everything.”

Ambrosio is attending Canisius High School in Buffalo, a private high school for boys in Grade 9 through 12. He billets with former NHLer Geoff Peters and his wife. Peters is an assistant coach with the Junior Sabres.

Ambrosio has made a habit of living away from home to chase his hockey dreams. When he was 13, he went to live with an aunt and uncle in Toronto. He attended the Hill Academy for school and played with the North York Rangers in the Greater Toronto Hockey League.

“When I was 13, I got used to living away from home. Doing something you love to do makes it that much easier to be away from your parents and siblings.”

Ambrosio still has two more years of high school before he heads to Boston College and he will use the time to get better and hopefully bigger.

“I have a few aunts and uncles that are tall, but not my parents and brothers,” he said. “I’m hoping I can grown a few inches. If not, I am not going to let size determine where I play.”