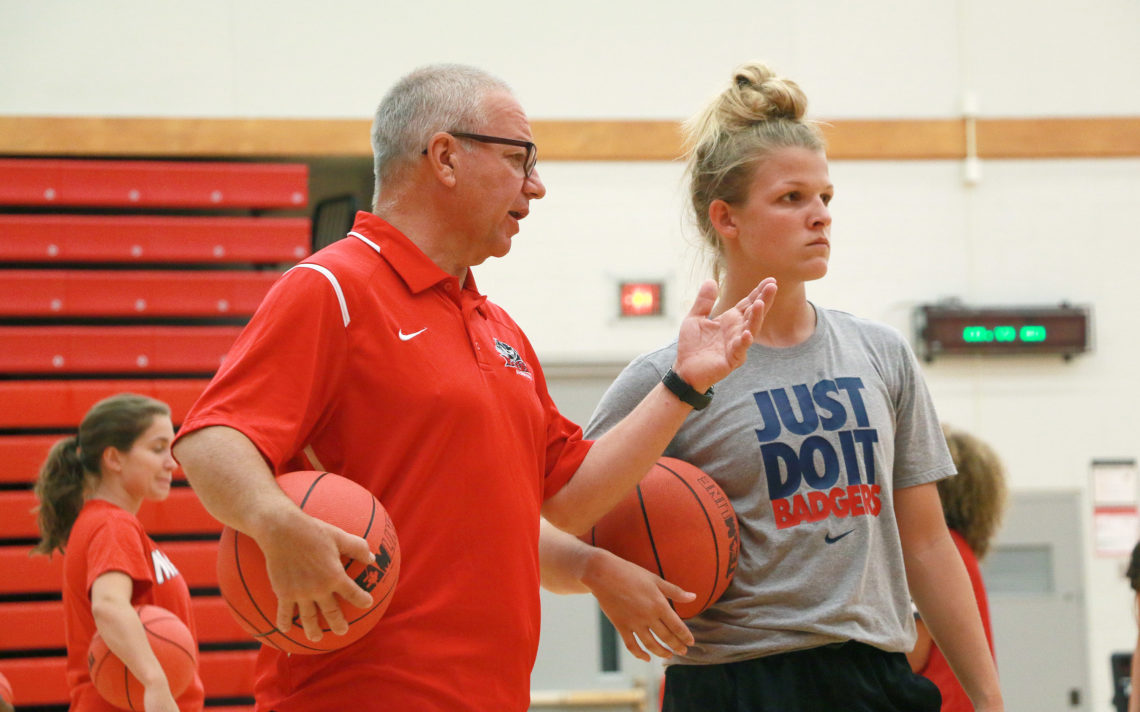 A Rao of hope?

Mike Rao is under no illusions about his appointment as the interim head coach of the Brock Badgers women’s basketball team.

“I’m not going to sugarcoat it,” said the former 36-year coach at Notre Dame in Welland. “Obviously I wasn’t their first choice, for sure, so I don’t have any illusions of that. I was at the table and other things didn’t work out.”

Rumours in the local sports community suggested Brock was choosing between a prominent local coach — who won’t be named because he denies applying for the job — and a coach from Kingston with college experience, but those rumours were never confirmed.

“I don’t know the whole story and I have no idea,” Rao said. “I didn’t get involved with that.”

With Brock men’s coach Charles Kissi taking a job with Raptors 905, Rao has been busy this summer helping out with the Brock men’s boys basketball camp and working out some of the Badgers’ returning players. Rao had planned to help new men’s coach Madhav Trivedi until he was no longer needed.

“I didn’t have any involvement with the girls because I was still working with Kissi,” Rao said.

“I guess I was the right person at the right time at the right place and things happen,” he said. “It became available to me, I didn’t have much time to think about it and I think I just stepped into it when it was offered.”

An assistant the past few seasons with Brock’s men’s program, Rao was asked to step in and help last year’s women’s coach Ashley MacSporran for the last five or six games of the regular season. On April 2, Brock Sports “parted ways” with MacSporran following a 6-18 regular season that saw the Badgers miss the playoffs.

“I got to know some of the girls and the dynamics were a little different than the guys,” Rao said. “It was something new, I got to know them in practice and it was a bit of a different vibe. It was an unexpected, pleasant experience; unexpected because I never coached girls basketball before.”

Rao feels the biggest difference between coaching men and women is the way women respond to teaching.

“You have to explain it and preach it and teach it a little differently,” Rao said. “Girls are more inquisitive and they want to know more about the intricacies of things. Guys are kind of  (just) do it.”

In taking over the team, Rao knows he is behind an eight ball the size of the rolling rock in Raiders of the Lost Ark. He inherits a squad that won one out of every four games last season and has no incoming recruits to bolster the roster.

“I am trying to be as optimistic as I can, but that is the reality,” he said. “You (BPSN) know your sports, but I have to play the hand that I am dealt and I am just trying to figure out these kids.

“I don’t know them in depth because last year we had so many injuries and we only had five or six people on the court (at the end of the season).”

That made it hard to assess any player’s ability and Rao is only familiar with four of the returning players. Brooke Murdoch has graduated and athletic six-footer Ieva Sukeviciute is not returning to the squad.

Critelli introduced Rao to the team on Thursday night and after a seven-minute talk by Rao, the team got down to work.

Rao’s first steps were to take a hard line in practice and institute a more up-tempo style. He has been running practice every day since last Thursday with a focus on conditioning and getting his players to think quicker.

“The girls are not to blame, but they have been without a coach for four months,” he said. “Our fitness level is not where it should be and it’s not their fault. I have to pick up on that piece a lot.”

As a coach at Notre Dame, Rao didn’t always have the most talented team but he believed they were always the hardest working.

“I’m not saying that we are going to be real good, but teams will know that they have played us.”

Rao won’t have to be worried about unfair expectations placed on him or his squad. Given his late start and how things ended last season, even the most optimistic of Brock fans won’t be expecting much at all.

It may take a while before things turn around.

“It takes time,” he said. “It just doesn’t happen overnight.”

A key part of Rao’s job is to start recruiting players ASAP.

“I am not going to be sitting on by hands, for sure.”

He is not going to let his interim status get in the way of thinking of the big picture and planning for next season and beyond.

“A title is a title and I know how I got it,” he said. “I know there were other people they felt were better fits for it and things didn’t happen.

Rao feels he is up for the challenge.

“I know now I still have a little bit left in my step and I still have things to contribute and things to iron out with myself,” he said. “I’m not completely done yet and that is what I found out.

“I am not fed up with the game and I still have a lot to offer.”

Brock will hold tryouts Sept. 7 and 8 and the regular season begins Oct. 26.