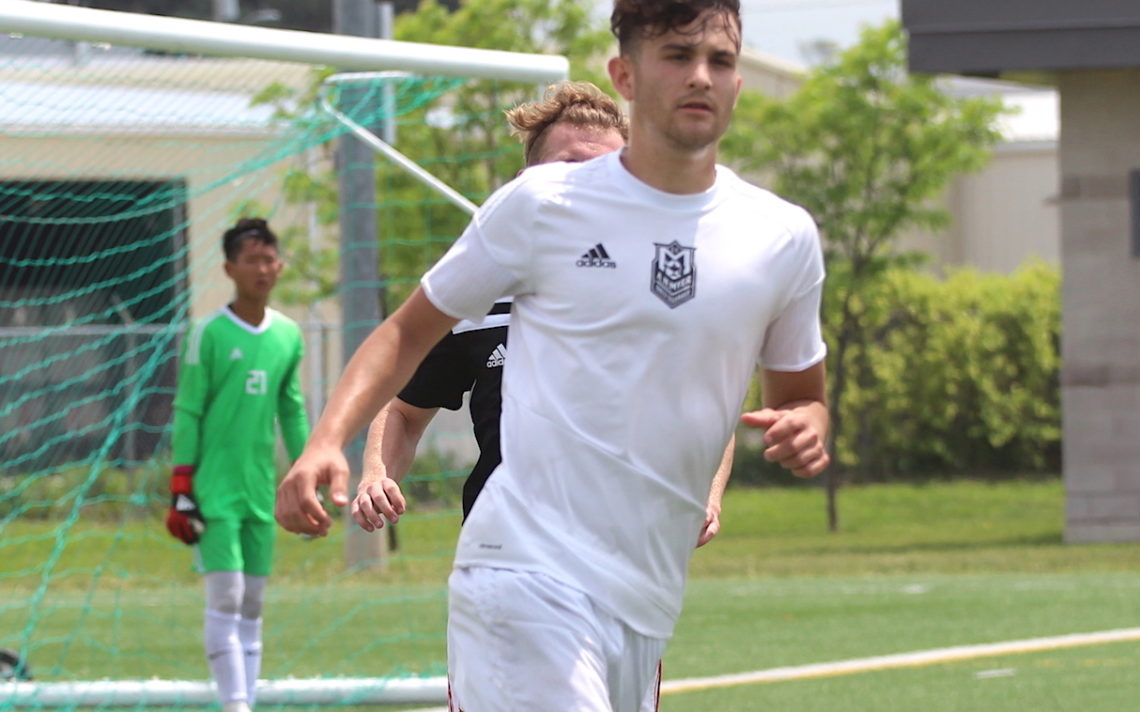 Marco Primerano’s introduction to international soccer was an eye opener.

The 17-year-old, Grade 11 student at A.N. Myer recently returned from Italy where he competed for Canada at the Lazio International Cup, a showcase tournament of some of the top teams in the world.

“All the best teams from Italy and the world were there,” Primerano said. “It was like seeing myself and better players than me against me on the other teams.”

Primerano said the talent level was off the charts.

“It was a bunch of those kind of players being able to do that same stuff as me, if not better,” he said. “You had to adjust knowing they could do the same things I could do. It was difficult.”

Primerano, who started at centre attacking midfield in all five games, gave his performance a thumbs up.

“I thought I did well. It was a big role and I think I played well and stuck to my position,” he said.

The experience gave Primerano a good look at where he needs to take his game.

“Just seeing the competition and seeing how good they are at the highest level shows me how hard I need to push myself moving forward to be the best I can be.”

Canada had a respectable showing for a team that had only been together for a couple of months, going 2-2-1, including a tie against No. 2 ranked Italy.

Team Canada were hampered by poor weather — it rained quite a bit during the games — and the fact the games were played on grass. The Italians were prepared with steel spikes which gave them an advantage.

Off the pitch, the team was able to tour around Italy where they visited the Colosseum in Rome and then went to see the Pope, where they were afforded VIP seating.

Primerano was chosen for the team after several tryouts in Vaughan and Toronto.

“It’s all about the coaches and what they see in the players. I guess they saw something in me and picked me for the starting lineup,” he said. “There were tons of players (between 100 and 150) there so it was hard to separate yourself from the group.”

Primerano said the players were put through their paces.

“We had lots of scrimmages and lot of training and drills, speed and agility tests,” he said.

Primerano felt like the weight of the world was off his shoulders once he got the good news.

“It was a bit of a relief after going through that whole process to finally make the team,” he said. “They said it was my soccer IQ and movement off the ball that really separated me and my skills being able to move around with the ball.”

Primerano and his Myer teammates are in Thunder Bay this weekend for the Ontario Federation of School Athletic Associations (OFSAA) boys AAA championship.

The Marauders are ranked 16th out of 20 schools.

“It’s top of the line. It will be the best schools in Ontario so all the teams will be solid,” he said. “I think we have a good chance of getting up there in the rankings.

“Every game counts. We have to be at the top of our game, every game. There’s no room for error.”

Primerano was also selected to compete in the 2018 Niagara Region High School Showcase sponsored by Niagara College June 13 at Young’s Sportsplex in Welland. The girls game will be held at 6 p.m. followed by the boys game at 8 p.m.