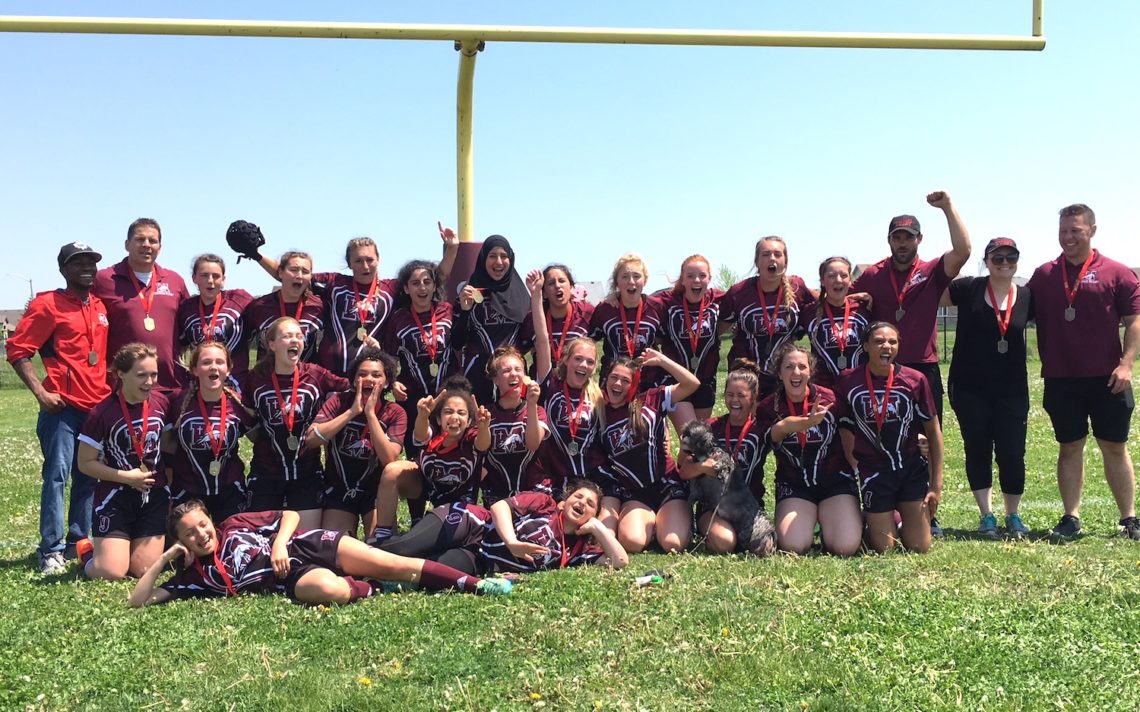 No one player was responsible for the Saint Michael’s Mustangs girls rugby team advancing to the Ontario Federation of School Athletic Associations A/AA championships June 4-6 in Stratford.

“We relied on our entire team to play important minutes throughout the season and this helped our depth develop,” head coach Chris Hodgson said. “Depth is important throughout tournament play and over a long season.”

That depth will come in handy at OFSAA where the Mustangs could play upwards of five games in three days.

“We have had a few key veteran players step up and a few more that just showed up new to rugby and contributed almost immediately,” Hodgson said. “We had impact from everywhere — veterans, rookies, from the bench, versatile players, athletes, newcomers to contact sports, etc. It’s been nice to see the team develop and get better as a group.

The team had a 7-4 record in league and tournament play, defeating Saint Paul 46-5 in the Niagara Catholic Athletic Association Zone 3 AA final and Centennial 37-15 in the overall Zone 3 final. It punched its ticket to OFSAA with a 27-10 victory over Zone 4 champion Beamsville in the Southern Ontario Secondary Schools Association A/AA final.

“For the most part, we saw a general trend of getting better as we went along,” Hodgson said. “I think despite ending up on the wrong score of a 10-0 loss against a strong AAA Lakeshore team in our own tournament’s championship final, that had the girls believing we could play with just about anyone.

“The team had faith in the process, the systems, and we were headed in the right direction.

The home tournament was the moment when Hodgson felt the Mustangs started to gel and become a team.

“That’s a pretty good accomplishment and we’ll do our best to put our best foot forward in hopes of representing the city and our school well,” Hodgson said. “If we continue to improve this week and play good rugby in the OFSAA tournament, then I like our chances of success.”

The Mustangs have done no advance scouting for the event.

“We’ll just take it one game at a time like we have all year long,” Hodgson said.

The coaching staff is made up Hodgson, assistants Ollie Varney and Bobby Sunstrum, and teacher liaisons Joe Lentini and Emma Druce. Varney and Sunstrum are with the Niagara Rugby Club.

Hodgson felt his staff was able to build on the efforts of Brian Carter, Kathy Carter and Jim Whittard, who started the program eight years ago.

“The coaching staff devised a plan that was strong on a professional approach including a focus on the basics, fitness, and a system that was learned throughout the season,” Hodgson said. “Despite a good start at the coaching level, that wouldn’t have meant much if the players hadn’t bought in and they were from the onset in early March.”