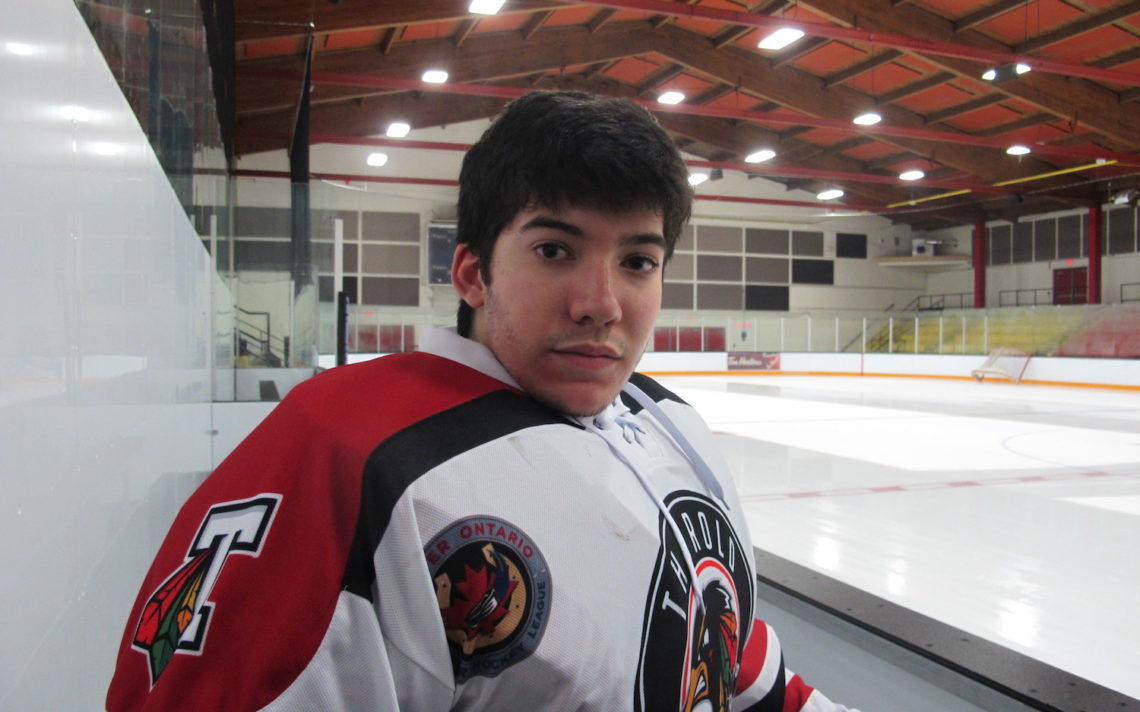 Goaltender Eric Dhillon picked up his first win at home this season Thursday versus Buffalo. PHOTO BY: BILL POTRECZ

Eric Dhillon is aware whenever he steps between the pipes for the Thorold Blackhawks big brother could be watching.

The Regals remain winless at 0-12.

Dhillon, who played last season with Nichols School in Buffalo, was thrilled to pick up his first win in front of the home crowd.

“It was very exciting. The fans made it nice and made it feel just like home,” the 17-year-old Buffalo native said.

Dillon was quick to give credit to his teammates.

“The boys made it easy. They were working hard and blocking shots and clearing the rebounds. They were doing everything they can.”

“He’s great. He coaches me on and off the ice with everything. He helps me with my equipment, with everything,” Eric said. “We go over a lot and we have a goalie coach who helps us, too.

Eric went to camp with the IceDogs as an extra goaltender before winding up in Thorold.

“I saw a new organization with a great coaching staff,” he said. “It was a great fit so I had to come here. It was a new start.”

Dhillon makes no bones about following in his brother’s footsteps.

“I want to play with him,” he smiled.

Thorold coach Scott Barnes likes what he has seen from his young backstop so far.

“I think he is coming along,” Barnes said. “I spoke to a guy who is an NHL goalie coach who trains him in the summer and he had a lot of faith in him to be successful in our league.”

Dillon has played in only two other games this season as Anthony Tremonte has handled the bulk of the goaltending duties, but Barnes said Dhillon will see his fair share of action.

“I’m bringing him along slowly,” Barnes said. “He’ll get his time in the net. No one is here to sit. We’re a developmental league and I want both of them to get their time.”

Dhillon’s other win came in Buffalo earlier this season, but Barnes said neither game was a cakewalk.

“He’s earned both wins,” Barnes said. “He’s earned his wings and he’ll be getting some opportunities against some other competition as well.”

Thorold scored the lone goal of the first period when newcomer Patrick McCluskey scored his first of the season eight minutes in.

Things opened up in the second as the Hawks took a 4-2 lead after 40 minutes.

Barnes will take the two points, but overall wasn’t happy with much of what he saw from his club.

“I was not very pleased with anything that happened tonight,” he said. “Chalk that up maybe because we had a little bit of a break for Thanksgiving and maybe the guys weren’t prepared to play.

“Buffalo aren’t a walk-over anymore. They have some speed and work hard. They can play. If you’re not ready to play, that’s what can happen. We pulled out the two points but I don’t know if we deserved it, really.”

BPSN Star of the Game: Hawks forward Brendan Charlton with a goal.

Up next: The Blackhawks are in St. Catharines Friday at 7 p.m.