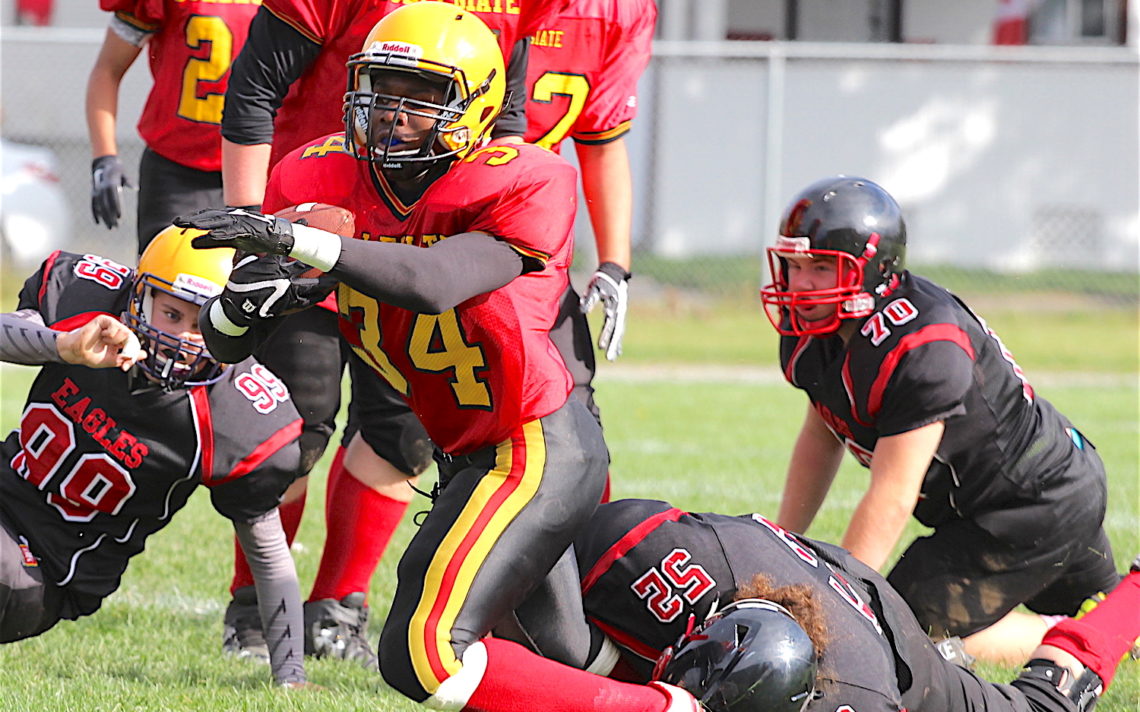 New running back marches in for Saints

In his first year of football, Chris Ceide has been a revelation for the St. Catharines Collegiate Saints football team. Photo by BERNIE PUCHALSKI.

An import from Florida arrived a little too late to help the St. Catharines Collegiate Saints football team last year.

“When I was six, I moved here and I was raised here,” the 17-year-old said. “I know more people here than in Florida and I felt more comfortable here.”

He quickly became comfortable on the football field.

“He was a fantastic surprise for us,” Collegiate head coach Nathan Greene said. “He stumbled into our football team from Florida and he had never played football a day in his life.”

It has turned out to be a great find for the Saints.

“He’s an absolute athlete and we haven’t had a running back finish runs like he has on this field,” Greene said. “He’s a tremendous player.”

Ceide’s abilities were on display Thursday as the Saints dropped a 24-6 decision to the visiting Grimsby Eagles in Niagara Region High School Athletic Association Tier 2 play. He had several strong runs, including a tackle-busting 24-yard TD scamper.

“I can see him, if he buckles down in school and does all the right things, he could definitely play at the CIS (Canadian university) level,” Greene said.

The 5-foot-11, 175-pound running back has always been interested in the sport.

“I have been trying to play football for a while and I just came to try out and they let me join the team,” the Grade 12 student said. “I was motivated by watching football on TV.”

He has thoroughly enjoyed his first season on the gridiron.

“To be honest, I love the hitting and everything, and scoring touchdowns is a rush,” he said.

He knows he has plenty of areas to improve upon.

“I need to work on my juking and stuff because my ankles aren’t in the best of condition right now,” he said.

With the loss, Collegiate fell to 0-4 on the season.

“It wasn’t completely unexpected as far as our execution goes,” Greene said. “We have one lineman still playing with us that started the season.”

Greene is hopeful all will be back for the playoffs.

“The guys that are in those roles right now are getting great introductory reps and they getting better with every play,” he said. “We are going to benefit for years to come by playing those younger players.”

The beauty of the Tier 2 schedule is that every team makes the post-season.

“The playoffs are what matters and our goal is to get better each week, develop in practice and gain some momentum when the playoffs start,” Greene said.

Ceide feels the Saints have plenty of potential.

With the win, Grimsby improved to 3-1 and kept a share of first place with the Eden Flyers.

Grimsby was missing running back Cole Abernot, who is out for the year with a broken hand, and two linebackers who were lost last week due to concussions.

“We had a couple of suspensions we had to address by sitting kids in the first half and everybody got in and everybody played,” Silverthorne said. “We’ll take it.”

Grimsby tried to throw the ball a little more Thursday and the Eagles were rewarded with a pair of throwing majors.

“When your running back has played two practices, you got to go with what you know, but we have (Justin) Defaria,” Silverthorne said, “We give him the ball as much as possible and we know it’s going to get harder and harder. They were tripling him today.”

The Eden Flyers (3-1) moved into a tie for first place in the Tier 2 standings with a 9-7 victory over the Governor Simcoe Redcoats (2-2).

“The kids went to work on defence and kept the game close and competitive,” Eden head coach Jordan Smith said. “We learned from our mistakes in Week 1 against Simcoe and tried to capitalize on Simcoe’s mistakes today.”

On offence, the Flyers weren’t quite as sharp.

“We have had some personnel issues due to injuries and we haven’t quite clicked yet,” Smith said. “Every week we have been improving, the kids are understanding and executing more complex plays, and I am really proud of the entire team.”

Contributing to the win were: Blake Maude with a 15-yard TD pass to Jason Daniels; Eddie Zhao and Frank Martens, sacks; and Will Bonner, fumble recovery.

No information was available from Governor Simcoe.

Quarterback Vasquez completed the scoring with a two-yard run.

Carson Provenzano recorded a pair of sacks for the Phoenix.

Darcy MacIsaac scored three majors to power the Westlane/Stamford Spartans (3-1) to a 41-7 victory over the Centennial Cougars (0-4) in NRHSAA Tier 1 action Thursday.

Isaiah May added a pair of majors for the Spartans and single scores were recorded by Chase Bowden and Josh Bigelow.