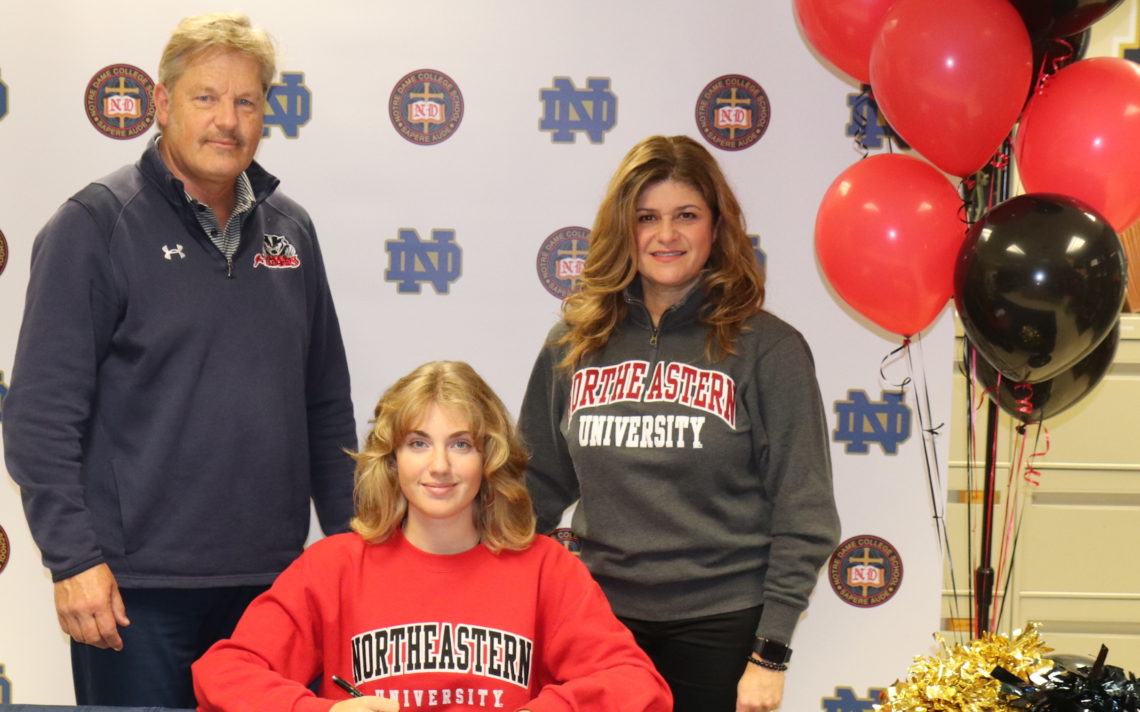 Ella Woodcock is one of the busiest teenagers around.

“It is just time management,” the 17-year-old Fonthill resident said. “I have grown up playing multiple sports and since I have gotten so used to it, it is kind of natural for me.”

The 5-foot-10 athlete admits her day can be more than a little hectic.

“I go to school, I go to rowing and from rowing I go to hockey and sometimes we have two practices a day.”

Woodcock spoke to a number of NCAA Division 1 hockey programs in the past few seasons but last week ultimately decided rowing would be her sport of choice at the post secondary level. She has committed to NCAA Division 1 Northeastern University Boston for rowing.

“For rowing, I started the recruiting process late because I was so focused on hockey and I didn’t get a chance to visit other schools,” she said. “When they offered it to me after my visit, I thought to myself that it was the place for me. I love Boston and I was there a few months earlier for a hockey tournament. I love the city, the girls, the program and everything. It was such an easy decision.”

Woodcock obviously loved everything about Northeastern but a future teammate helped seal the deal for her.

“After their practice when the girls were leaving for the bus, the girl that was hosting me, Caroline (Surbeck), came up to me and said that she really hoped that I would choose Northeastern. She said, ‘We love you here’ and that moment made me want to stay.”

Woodcock was relieved to sign her national letter of intent with Northeastern.

“I have alway been feeling the pressure of what school I was going to go to and would it be for one sport or the other sport,” she said. “I was tossing and turning but when I made my decision on rowing and signing with Northeastern I was really happy and it feels like so much weight has been lifted off my shoulders. It is so nice.”

She is planning to study mechanical engineering and has high hopes for her collegiate rowing career.

“I would like to win a CAC (Colonial Athletic Conference) championship and hopefully make it to the NCAA championships.”

There are no plans to rest on her laurels after landing the scholarship.

“I am going to train and put in the work.”

This spring, Woodcock won gold in the quad and a bronze medal in the mixed quad at the Canadian Secondary Schools Rowing Association championships. That success has carried on into the fall.

Competing in various boats, she has won numerous fall regattas, including golds in the quad and coxed quad and third as a last-minute replacement in the double at the Head of the Schuylkill Regatta of Philadelphia. At the recent Head of the Charles, her boat finished seventh out of 50 crews after another crew crashed into them at the beginning of the race.

Fall rowing has been a revelation for Woodcock.

“Last fall, Crossley and Notre Dame merged for the fall season and I was able to row with a lot of different people in bigger boats. It was incredible. It made my whole fall experience and it has made it entirely better. Going into university, rowing with good people and people who want to row makes the sport 100 times better.”

She loves the feeling of being in a boat.

“It’s the crew. Once you are rowing, you get this feeling in a bigger boat or even a smaller boat of the click, just the snapping and sending. It’s amazing and nothing can top that feeling.”

“She had a goal in mind and she knew what she wanted to do,” the Notre Dame head coach said.

Zahorchak loves having Woodcock in her program.

“She is an asset as a team player because she is a leader. She thrives off the team energy and brings everyone along together with that hockey player hype.”