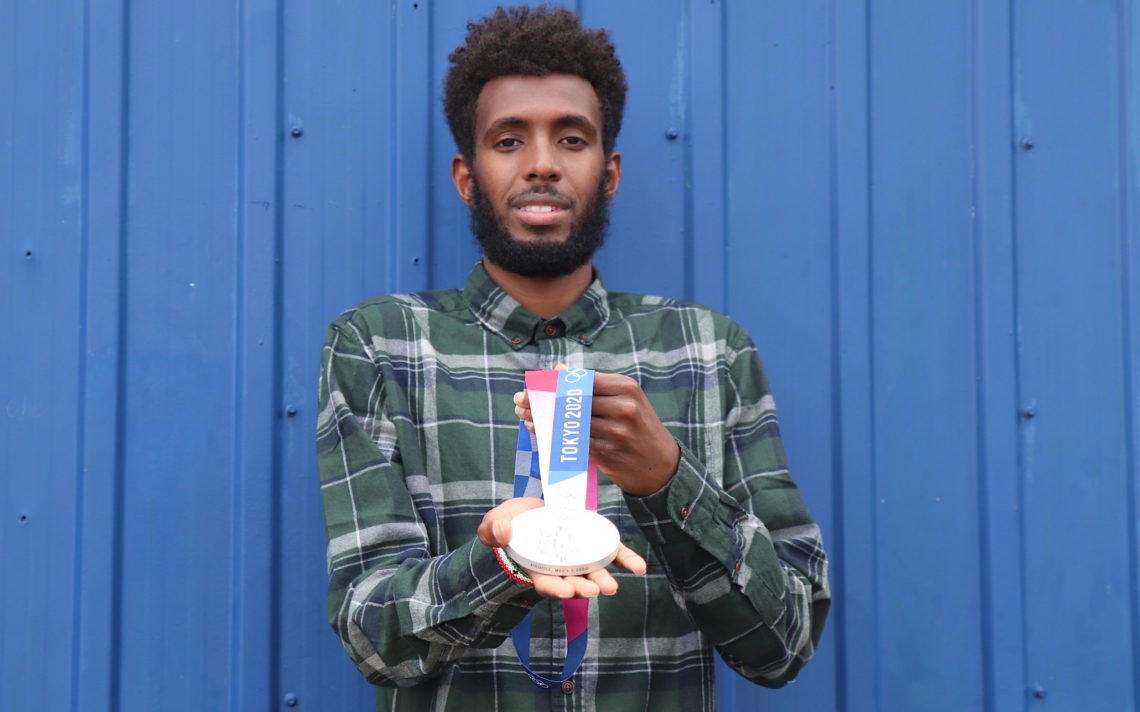 Fifteen years after he started training at the Niagara Olympic Club, Mohammed Ahmed returned to the St. Catharines location Thursday night wearing an Olympic 5,000 metres silver medal around his neck.

“Everything seems the same honestly,” the 30-year-old former St. Catharines resident said, while sitting in the NOC’s clubhouse prior to a small reception in the honour. “All the banners of all the universities people went to are here, including the one from Wisconsin that I brought back.”

He expressed delight at being home.

“What makes home home is the people, the memories and it is kind a museum for me every time I come back here,” the three-time Olympian said. “I am reminiscing back on history and the people. It is really, really good to be back.”

The three-time St. Catharines athlete of the year vividly recalled the first time he arrived at the club in June of his Grade 9 year at St. Catharines Collegiate.

“It was a Saturday and I can even remember the temperature that day. I recall the guys taking me for an 8K- or 9k-run.” 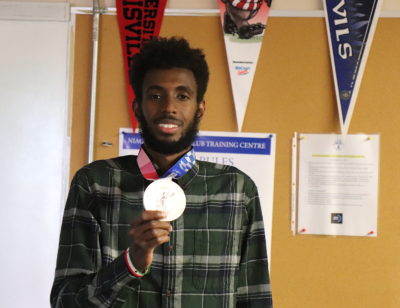 He flashed back to running that first time with Matt Mahler, Spencer Prudhomme and Ryan Thomas.

“I was kind of like ‘Am I going to get dropped here?’ but I hung on to them and it felt really good. I felt anxious and nervous and I remember finishing that run and thinking that I wasn’t so bad.”

“I saw a tall, lanky kid in basketball shorts who was ready to run. He was quiet but he has really matured and come out of his shell.”

No way did she think she was in the presence of a future Olympic silver medalist.

It would take a lot of things to get him there.

“It was ability, good programs, lots of support, really learning to believe in himself, trusting his program and his coaches,” she said. “Kids need to have abilities and a good program but they really need to develop how to believe in themselves and develop the confidence that goes with the hard work and the talent.”

Ahmed’s Olympic dreaming began when he was in Grade 8 at Queen Mary.

“I wasn’t good like a lot of the guys that were training at the NOC, like Brad Jamison and Doug Easterbrook and Ryan Thomas. Those guys were the same age as me but they were with the club from a very young age and they were a little bit more developed than me,” he said. “They just dominated me in Grade 7 and 8 and I was nowhere near them but something made me write in my Grade 8 yearbook that I wanted to be an Olympian.”

Years later, one of his former Queen Mary teachers send him a picture of the yearbook page.

“It was pretty interesting to see that but what I think did that was the summer before Grade 8. I watched the 2004 Olympics, I was very motivated and inspired and it was in my head,” he said. “It was October or November before your graduating year that you are preparing the yearbook. There wasn’t too much thought to it but I did write that and I was foreshadowing the future in some way.” 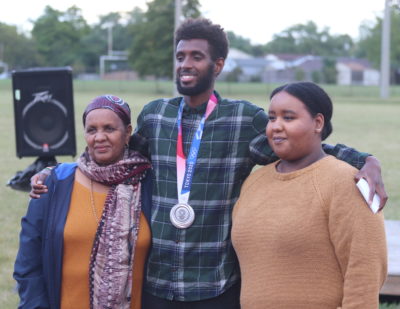 “I was striving for that and that was a clear goal that I want to go after. But even then, you don’t know what the journey entails.

His journey in high school began at Collegiate under coaches Perry Wakulich and Alex Acs, both of whom remain close to Ahmed to this day.

“He came to Collegiate cross country practice because he wanted to learn how to run,” Wakulich said.

On Ahmed’s first day at practice, he showed up with basketball shoes and shorts that went way below his knees.

“I looked at those and cringed a little bit but that was what he was comfortable with. It didn’t really matter to me as long as he showed up for practice,” Wakulich said. “After about a week, I thought, ‘This kid could really have something,’ He was like a diamond in the rough. He kept on coming out and I knew I had to look after getting him proper footwear.”

Wakulich approached the Collegiate alumni association and it provided the money to purchase him a pair of proper shoes.

“I told them that I had a kid who had a lot of potential and could we get him a decent pair of shoes and he is going to hurt his feet.”

The shoes weren’t the only purchase that day.

“When we bought Moh the shoes, there were these socks in the colours of Collegiate. They were black with red and gold flames going up the side,” Acs said. “He still has those socks and they have become his lucky socks. They are so threadbare that he only wears them when he does his warmup and then he competes in other socks.”

Those socks made the journey to the Tokyo Olympics.

“He wore them in practice on the day he got his silver medal so the luck has followed him,” Acs said.

The socks and shoes were the beginning of a dominant career for Ahmed at Collegiate. 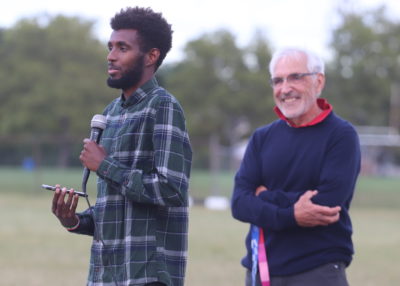 “From then on, between Alex and myself we kept encouraging him and his first year he was one position away from making it to OFSAA (Ontario Federation of School Athletic Association championship),” Wakulich said. “He was fasting for Ramadan and he didn’t have a kick at the end of the race.”

Ahmed would go on place seventh at OFSAA cross country in Grade 10 and then won in Grade 11 and 12.

“It was building and building and he loved to run,” Wakulich said. “He had a great attitude and was alway smiling. He is a salt of the earth kind of guy.”

Ahmed dominated high school running in cross country and track and field. In the 3,000 metres in his last year, he lapped the whole OFSAA field.

“It was crazy,” Wakulich said.

He admitted he didn’t think he was witnessing the birth of an athlete that would reach an Olympic podium.

“No but I knew he was going to be fast and I knew he had great potential,” Wakulich said. “We steered him in the right direction to Andrew Yap for more of the technical direction and the efficiency of his running. We got him involved with the club and he was very strong and all the other runners and his teammates were great in making him feel at home and it just built from there.”

Those building blocks would result in Ahmed finishing second in Tokyo.

“There’s not a whole lot going through my head when I crossed the line,” Ahmed said. “You are just doing the action and I think it was more relief. I wasn’t exuberant. I just kept walking and my teammates Justyn Knight and Grant Fisher were going ‘Moh, Moh, Moh’ and I wasn’t hearing. I kept walking away and they ran to me.”

The relief was clearly the overriding emotion.

“It was 15 or 16 years of work to do it. I was so ready last year and that was stopped and it was wait, wait, wait for a year and a half,” he said. “That was the only thing at the end of the tunnel and part of the time I was wondering if it was going to happen. There was a lot of mind games so there was a lot of relief.” 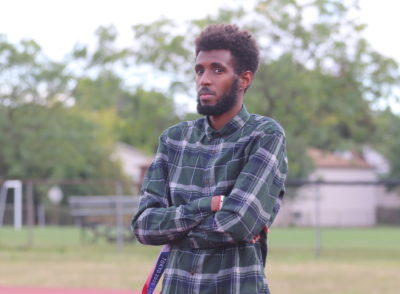 So far, his Olympic performance has done little to change his life monetarily and he doesn’t expect that to happen.

“You are not making much from track and field and you are not in it to get rich. That is just a fact,” he said. “Once you go down the route of marathons there is a little more financial compensation but for track and field distance it is not a whole lot. You have to do it for the love of the sport and that is what I have been doing for the last seven years.”

Success hasn’t and won’t change who he is.

That was evident when Ahmed and a few of his former Niagara Olympic Club teammates attended the Canadian men’s soccer team’s World Cup qualifier against El Salvador.

“I was at the game yesterday and no one knew who the hell I was. I am just another guy and I honestly don’t feel any different. It’s just the way I go about my life. I am on to the next thing.”

The next big thing on his calendar are the 2022 world track and field championships in Eugene, Ore.

Wherever Ahmed goes, he has the support of many in Niagara.

“He is a great person, a great athlete and a role model,” Wakulich said. “He is someone that you love to spend time with.”

And a small number of people got to do just that Thursday night.

“It’s a chance to recognize Moh’s achievement with his silver medal, have a big cheer, let some people see him and congratulate him,” Stewart said. “We can’t go too big so we have limited numbers but there are certainly some people here who are close to him and helped him in the village process of raising a child into an amazing athlete.”

“I am a loss for words at the turnout and seeing familiar faces who have decided to show up for this occasion,” he said. “It means a lot.” 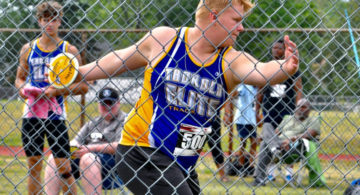 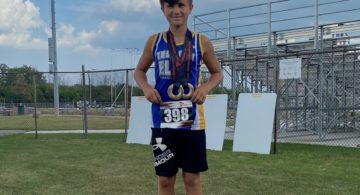 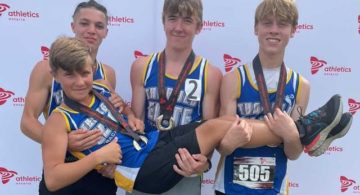