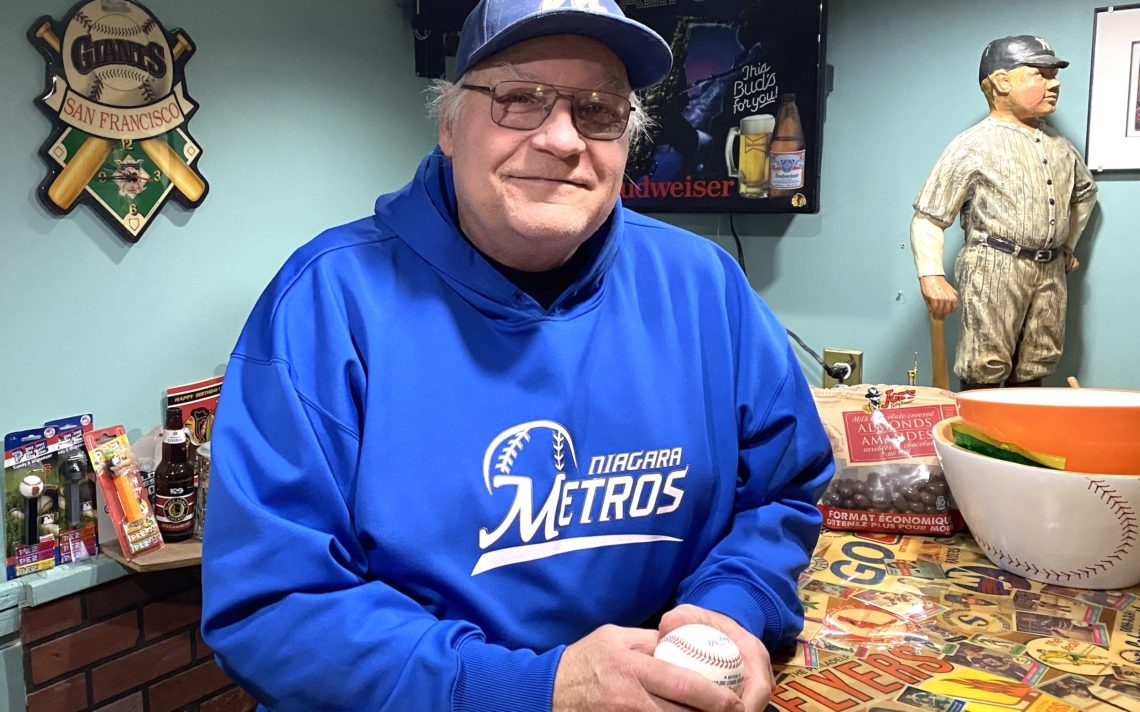 Mark Walters was inducted into the St. Catharines Sports Hall of Fame in 2009. Photo: BILL POTRECZ.

Eleven years after the fact, Mark Walters still marvels he was elected to the St Catharines Sports Hall of Fame.

The 66-year-old Thorold resident was elected in 2009 along with Bruce Erskine, Marianne Groat, Bob McCready and George Taylor mainly due to his involvement with senior baseball in St. Catharines.

“I had a couple of people speak for me in order to get it done and I’m forever thankful to them for that,” Walters said. “The fact my resume was strong enough to get in there alongside those others — there are some fantastic names in there.

“I honestly don’t think I’ve accomplished nearly what some of those other people have, but apparently from the outside looking in, some other people did.”

Walters was front and centre for the Niagara Metros from 1985 to 2014, serving the organization in virtually every aspect from player, to general manager, to clubhouse cleaner.

“No matter what you do, if you do it long enough people will start to recognize you,” Walters smiled. “I did it for 30 years and I’m very proud of what I was able to accomplish to make it arguably one of the best senior programs in the province. I don’t think anyone could argue that fact.”

Walters took over the Metros from his late father, Hap Walters, when he was only 30 years old.

“I was still a good ball player. There was nobody willing to step up at the time and it was going to fold,” he said. “I just learned along the way. My playing career took a back seat. It’s hard to do both and I wanted to focus on doing things the right way from a management standpoint.

“I really began to enjoy working with the kids and to see it all work out and flourish the way it did, starting from a ragtag group of about 12 guys, and we turned it into a viable entity at the highest level of the province for a long time.”

Under Walters’ leadership, the Metros earned a reputation as a top-notch organization, on and off the field.

From 2012-2016, the Metros won more games at the Ontario Elimination Tournament than any other team in the province, Mississauga and Tecumseh notwithstanding.

“People would never guess the Metros had the next best record after those two,” Walters said proudly.

Walters bowed out following the 2014 season but stuck around to run the scoreboard and do the announcing for Metros home games at George Taylor Field.

“I did stay somewhat involved with the team because I still enjoyed going to the games and enjoyed the friendships with the other teams,” he said. “I was totally at arm’s length but close enough to keep those friendships.”

Before the 2020 season, Walters bowed out completely.

“I always said if it got to the point where I don’t really feel like going to the park, I shouldn’t be doing it,” he said. “The last couple of years I’d be dragging my ass to the park on a Thursday night when I’d rather be sitting on my deck and enjoying a beer.”

Kerry Hedden and Jono Marcheterre teamed up to run the team when Walters retired and they have now passed the torch to Justin Ayles and Dylan Perego.

“There’s a younger group that’s moved in and they’re doing things the same way that we did them when I was still there,” Walters said. “We taught them there was a right way and wrong way to do things. It takes a little bit longer and you have to be a little more involved to do them the right way, but it pays off.

“If you’re doing things right and treating people with respect and you get them to buy in, then those players will step in and take over when you need them to and that’s what’s happened now.”

Walters, who was also an outstanding goaltender for the St. Catharines Falcons from 1973-75, recently retired as a teacher from Niagara College.