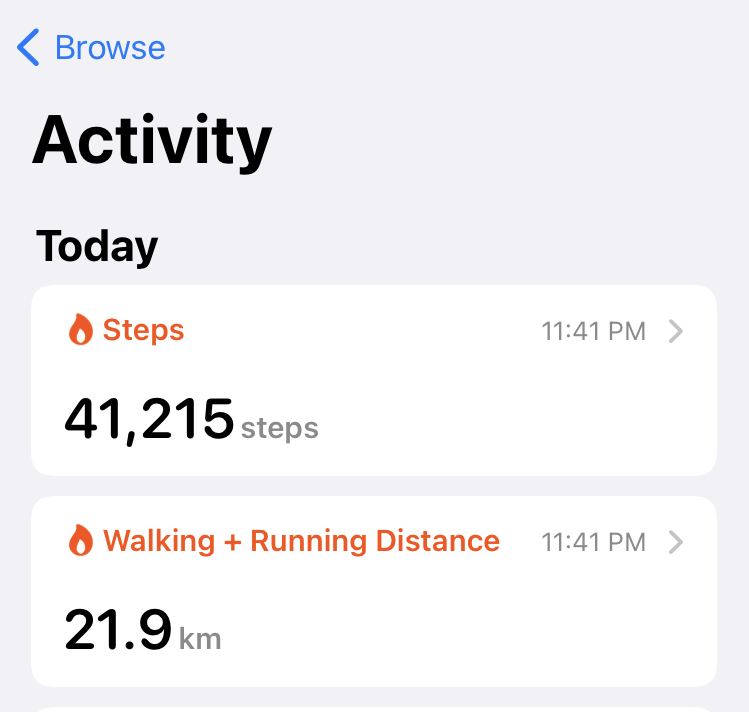 Nothing says I love you like your sweetie giving you a fitness tracker for a Valentine’s Day present. I prefer to think in those terms rather than the first thought that popped into my head which was “You might want to drop a few pounds Fatso or your next Valentine’s Day will be a solo affair.”

I truly believe she was reacting to my decision to start walking in the new year because I had run out of things to do around the house during this pandemic. I had already rearranged my record and CD collections numerous times, I had sorted my sports equipment and I had completed four of the 37 much-needed tasks around the house. In my defence, the remaining 33 jobs were either messy affairs, required a lot of effort or skills that I am sorely lacking.

The one time I dipped under 30,000 was the day after I got my Astra Zeneca shot at a pharmacy in Welland. Because I asked for the shot with the extra microchips to not only track my movement but also read my mind (Good luck with that futile exercise), I was extra tired and couldn’t manage by daily routine. But I quickly made up for it by surpassing 40,000 steps on both Saturday and Sunday.

Each morning when I walk, I see many familiar faces and we wave or exchange a friendly ‘Good morning’ as we do the COVID-19 shuffle to give each other proper social distancing on the sidewalk.

The only time I don’t normally exchange greetings is after I have walked the stretch of sidewalk on Hurricane Road in Fonthill that is tilted at a 45-degree angle for several hundred metres. I can only imagine how many six-martini lunches were consumed to come up with that feat of engineering. I generally have to pop a Gravol after that stretch as I fight vertigo not experienced since the last time I went on the Harry Potter ride at Universal Studios. My sister described it as a gentle ride through the castle but I thought otherwise as I launched a foamy volcano of recently-consumed Butter Beer over the popcorn-strewn sidewalk.

The only people who don’t share greetings with me on my morning walks are generally half the people under 25 and what I can only assume are the recent transplants from the GTA who have exchanged a $2 million, 1,000-square foot home in Toronto for a $1 million, 3,000-square foot home in the formerly quaint village of Fonthill. They are no longer being serenaded by sirens, gunfire and doomsday sidewalk preachers proclaiming the end is near (Duh! Everyone can see that) but rather by birds chirping, frogs croaking and the sounds of construction machines backing up to get ready for another run at ripping up former tender fruit farmland that used to allow farmers to plant fruit that they could grow for $8 a bushel but could only sell for $6 a bushel because Walmart was selling imported produce from overseas for $4.99 a bushel. But I digress.

I can understand the lack of acknowledgement from some of the younger generation I meet on my walks. They have their heads buried in their phones, Facebooking, Instagramming, TikToking, Tweeting, finishing their undergrad, masters or PHD courses online or putting the finishing touches on a song that will instantly garner 3 million streams and make them more money in a week than I have made in my entire lifetime.

But the former GTA folks are another story. As they see me coming up the sidewalk talking animatedly to myself like I am known to do on occasion (OK, a lot), I see them reaching for the legally-registered handgun in their left pocket and their throwaway piece with the filed away serial number in the sock on their right foot. The gun on the left is for the justified shots of self defence while the gun in the sock is for a preemptive strike without the need for all that tedious and time-consuming paperwork. I am hoping they get in the small town spirit of greeting perfect strangers before one of them fills me full of lead.

I must admit there are a few people who get on my nerves while I walk, most notably one resident who lives on a corner lot that backs on to Highway 20. Each time as I go from a short jog back into walking near his house, he makes a comment like “Is that all?” or “Don’t tell me you are stopping already?” I wish he would keep his comments to himself as he propels his riding lawn mower over a lawn that I could hand mow in 30 minutes with a pair of nail clippers.

Early on in my walking routine, I would jog stretches of my journey during daylight hours but now I jog only at night. Since the last time I ran was several years ago when there was a run on crab legs at the all-you-can-eat seafood buffet in Myrtle Beach, my running style has become abysmal and not for daylight consumption.

There is also a practical reason for this day-time aversion to jogging. If my awkward gait was viewed by the predatory animals in Fonthill (foxes, possums, coyotes, nest-protecting Canada geese and giant compost-raiding raccoons), they would see my frail condition, separate me from the herd and feast on my well-cushioned bones. I have seen too many mature but slightly gimpy gazelles get devoured by hyenas on the Mutual of Omaha’s Wild Kingdom to not know it is a real possibility.

The end of my walk takes me through a subdivision where new houses are being built at a speed that defies both their price tag and a determined effort by the Big Bad Wolf. I am hoping that by walking past these workplaces, through osmosis, I will pick up hammering, sawing, cementing, drywalling and all the other skills that I severely lack. As of yesterday, that still hasn’t work and I will have to be content with asking my father-in-law for help.

The two biggest highlights (no pun intended for the first highlight) of my walking have been getting asked by a young couple to share in their celebration of 4/20 by sparking up a fatty and finding a $20 bill. Before someone calls me up to claim the bill by identifying it as green and having a picture of the queen on the front of it, let me tell you I am too smart to fall for that. I am going to at least need to know what is on the back before I break the time-honoured Finders Keepers, Losers Weepers covenant.

My family has been mostly supportive of my new exercise binge but I occasionally drive my wife crazy as I pace behind the couch while I watch TV. Last night she accused me of walking like a banshee but I disagreed. I’ve been known to wail like a banshee but never walk like one.

Surprisingly, the most support I have received for my walking is from one of my close neighbours who describes me as an inspiration. I appreciate the sentiment but I think she is just buttering me up so I don’t out her in the local media about her penchant to wander around her backyard all day wearing a housecoat and clutching a glass of wine that never seems to go down despite her constantly sipping on it. Don’t worry dear. Your secret is safe with me.

I would love to stay and chat more but I am just about ready to go out on my afternoon walk. It is always a good prep for my after-dinner stroll and dovetails nicely with my evening jaunt, bedtime hike and get up in the middle of the night pee and walkabout.