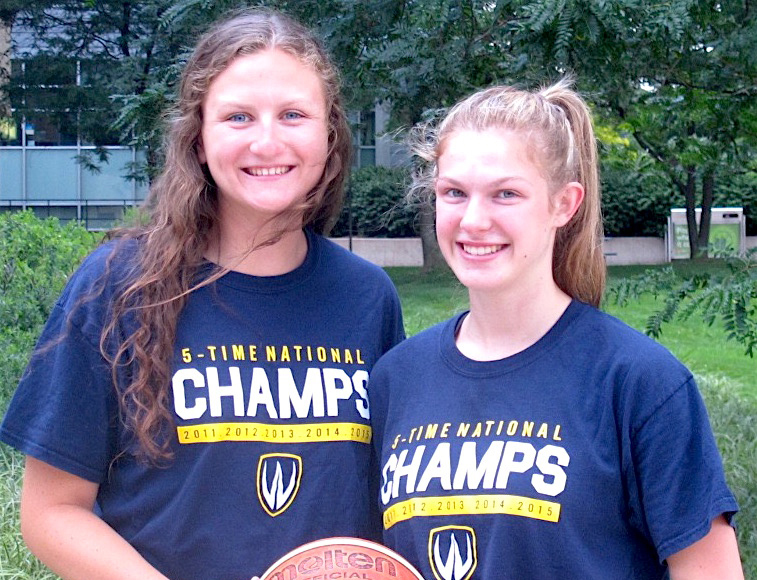 For Pilling, a 17-year-old Eden grad, Vallee was the big attraction to Windsor.

“It was definitely the coach — I was really excited to get a chance to play with her — and I really got along with all the girls,” the 5-foot-9 guard/forward said. “You know how you get that feeling? I got that feeling when I went there.”

She wanted to make the decision all on her own, but found it difficult to decide.

“I know my parents are always going to be really proud of me no matter what I do but I just felt because it was my future I had to decide.”

She was aided in her choice with input from her mother Audrey.

“She told me that she she thought this would be right for me and it kind of stuck with me.”

Pilling always believed she had the ability to play university basketball. She had those thoughts confirmed this past season while playing JUEL games in Windsor. Vallee had come to scout Kenny and Pilling also caught her eye.

“She noticed me there and that’s when I realized that coaches were actually watching me,” she said. “I knew I wanted to play right from Grade 9.”
Pilling spent two weeks in the summer training with the Windsor squad.

“I felt like I fit in really well, but I was definitely sore because there were days when we would do three workouts in one day. I liked it and it was fun.”
Pilling is keeping her personal goals to herself.

“I know she is going to give all of us a chance to play, but I will definitely have to earn my minutes in practice,” she said. “The team’s goal is to win nationals and I want to do my part to make that happen.”

Her biggest adjustment to university ball will likely be the physicality of the players.

“We have been working on our cardio a lot but for me I will need to work on my strength. I’m pretty confident in my card but I have to get stronger for sure.”
She plans to study business administration and can’t wait for the season to start.

“I’m excited to get to play with Erin for some more years and I’m excited to see how good I can actually get. Going to Windsor gives me the best chance of reaching my potential.”

Pilling reached her potential in many sports in high school. She went to Ontario Federation of School Athletic Associations championships in five sports, including basketball, volleyball and singles badminton in Grades 11 and 12.

For Kenny, an 18-year-old Denis Morris alumnus, her choice of Windsor was first and foremost an off-court decision
“I chose Windsor because it had my program,” the six-foot forward said. “I’ve been talking about forensic science for a really long time now and my parents made me realize I do want to do forensic science.” Her interest in forensic science germinated from watching TV.

“My dad hated it, but my mom and I really loved the crime shows like Criminal Minds. I loved looking at how the human body worked and figuring out creepy peoples’ minds.”

Both her parents are Brock University employees — Joe Kenny is the manager of the athletic therapy clinic and Karen McAllister-Kenny is the director of youth programs — which meant Erin would have garnered her free tuition. That economic motivator didn’t enter into the conversation.

“Even when I was little, they never pushed me to go to Brock,” she said. “They told me to do my own thing and we would figure it out.”
Getting to play for Vallee was an equally enticing proposition
“Obviously the program there is incredible which was a push for me to go there and coach Chantal has been very persuasive. She is really great and I am super excited about it.”

It took Kenny until this JUEL season to realize she had the potential to play OUA basketball.

“I think it was when coaches started to approach me,” she said. “I never really felt that confident in myself and once coaches started approaching me I thought that maybe I could do it.

“Once a renowned coach like Chantal approached me, I thought that maybe I could be pretty good.”

She has modest goals for her freshman season.

“Obviously I would love to play, but I’m more looking at learning from the two older girls (Emily Prevost and Cheyanne Roger). They are both incredible players and I am hoping to learn a lot off of them.”

“I’m behind them in that role but that’s OK.”

Prevost and Roger are fifth-year players.

“It will be tough competition in practice, but it will get me ready for games.”

Kenny knows she needs to get physically stronger and her cardio also needs improvement.

“I’m pretty strong but I do need to get bigger in size,” she said.

She can’t wait to be part of a tight-knit team.

“I am looking forward to getting to know the girls because it does become like a family, Kenny said. “Even the younger girls I played with, you become really close, really fast.”

Windsor’s training camp opened Aug. 31. Niagara fans will get a chance to see the two Niagara products up close when Windsor travels to Brock on Jan. 20.
“I am going to tell everyone to come on that day,” Pilling said.