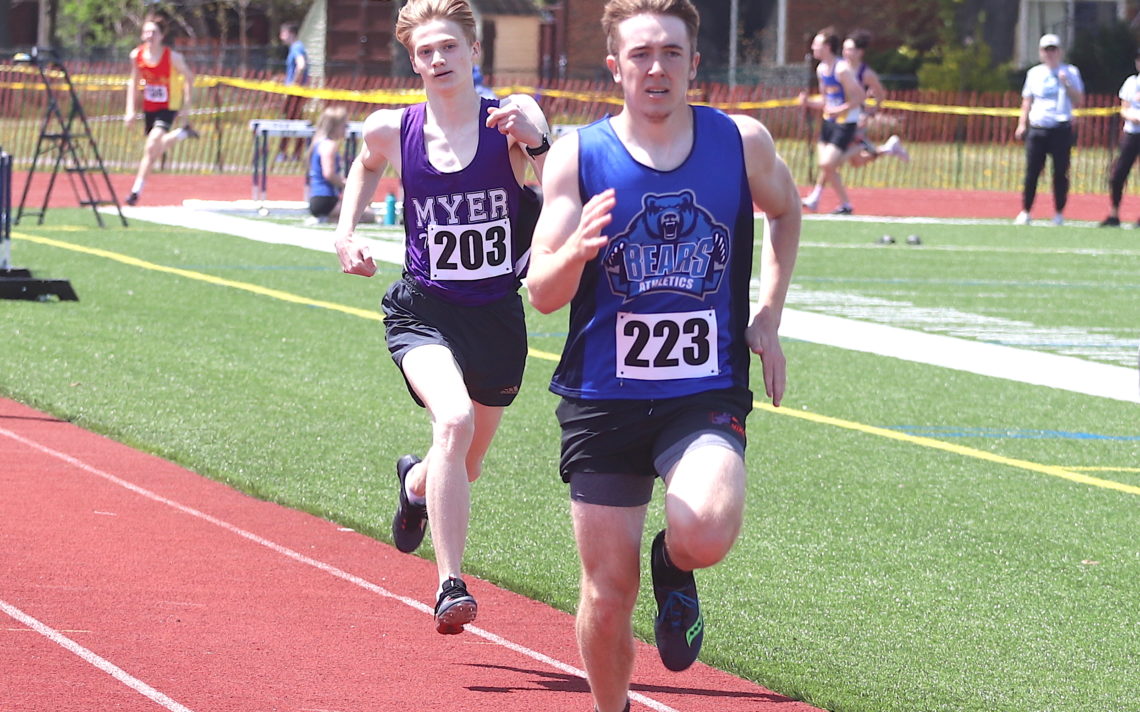 The Moose is loose at Zone 3 track

When it matters the most on the track, it is time to let The Moose loose.

“They all call me The Moose because of my racing habits so they say, ‘It’s time to let The Moose loose’ right before the race and I am all jacked up on adrenaline,” said Port Colborne High School’s Sammy Tonnies Tuesday, after winning the junior boys 400 and 800 metres at the Niagara Region High School Athletic Association Zone 3 track meet at Centennial.

Before races, the 16-year-old Port Colborne resident will be seen doing nervous taps on his shins and knees and doing a weird thing with his wrists, but once the race starts, the Thorold Elite Track Club member is all business.

“He is someone who ends up running crazy PBs because he gets himself so pumped up for all of the races,” Thorold Elite coach Steven Fife said. “He ends up not just running a half second PB but at NXT Champ last year he did more than a 10-second personal best in the 800 metres. In the 400 metres a couple of weeks ago, he ran a two-second PB. He gets some big numbers when it really counts.”

“Normally when I PB, I don’t do it by half a second. I usually go for a full five seconds,” he said. “I set a plan for it and then it’s ‘Today’s the day. You are going to try and reach it and push past it.’ It is all about self-discipline and trying to improve.

Tonnies gets extra motivation thanks to a friendly bet he has with Fyfe. The two started talking about 1,500 metres times and made a bet that if Tonnies could beat a certain time Fyfe would watch a certain number of episodes of The Office.

“I haven’t beat the initial time that we set — I have to beat 4:40 in the 1,500 — but I have been slowly chipping away at other bets that we have made and I believe he is halfway through the series now,” Tonnies said.

Fyfe gets a kick out of the wager.

“I had never seen it and I think that is extra motivation for him to run these times as well.”

Tonnies joined the Thorold club at the end of Grade 8.

“I originally joined for cross country and slowly found my way to the middle distances.”

“I love being around my team, it is a great community and they are so supportive and helpful.”

His biggest step as an athlete since becoming a club runner is getting mentally tougher.

“You might be one of the fastest guys out there but if you are not willing to push yourself, you are not going to win.”

He has high expectations for the high school track and field and summer seasons.

“My goal is to medal at OFSAA (Ontario Federation of School Athletic Associations) in hopefully both events and maybe go to Sherbrooke, Quebec, for nationals.”

He is clearly not messing around.

“My training equipment at home is one rusty 40-pound dumbbell and a folding chair. I have been doing research on training for two years and I am just trying to improve myself and become more efficient in my training habits,” he said. “Sometimes it takes me an hour and a half to do it in my room. I put on some country music and get working.”

He trains four times a week with the Thorold club and all the time at home. He is driven by his passion for the sport.

“I love the running community and the individuality of the sport,” he said. “My whole team is right behind me and I like that it teaches you discipline and improvement is a big thing. In a team sport, you win and lose as a team and that can sometimes be devastating if not everyone is giving their all. As an individual, if I am not giving it a 120 per cent when everyone else is giving a 110, then that is on me.”