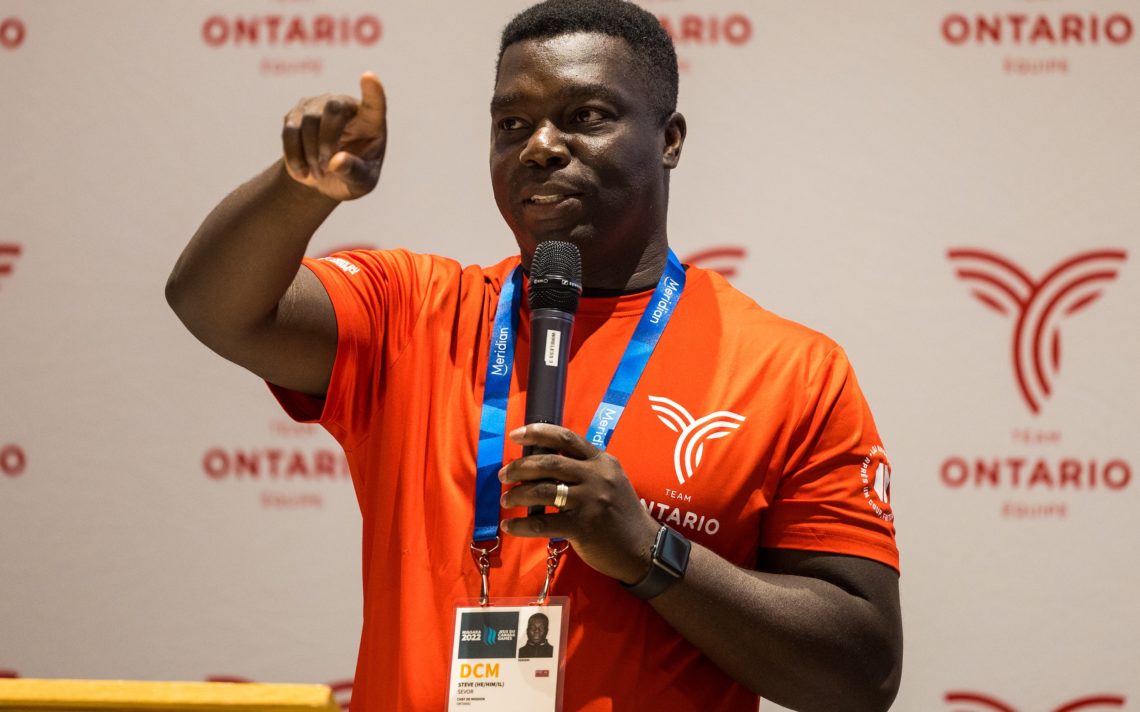 Team Ontario is in good hands

There were plenty of memorable moments during Steve Sevor’s first week as Ontario’s chef de mission at the Niagara 2022 Canada Summer Games but one memory from Wednesday night stands out the most.

“At the end of the game, as soon as the final whistle blew, our rugby team darted directly to our lacrosse team that were in the stands cheering them on the whole day,” Sevor said. “That’s just totally indicative of what Team Ontario and this environment is really special for. You have people that you haven’t seen before, from other sports, and you’re part of that one team. That aspect of the joy of going to another sport and supporting them was just fantastic.”

Watching as many of the sporting events as possible has been a big part of the 46-year-old Hamilton resident’s job description this week.

He begins his Canada Games day at 7 a.m. with a mission meeting among all the chefs and the host society to get updates on things teams need to be aware of and share any concerns or questions. At 8 a.m., he attends his team’s meeting to give them a pep talk and then share any relevant information from the first meeting.

He feels that job is his most important one.

“When we get down to the Games environment, one of our most important jobs is to be the ultimate cheerleader for the teams. Prior to the Games, we work with them to get them prepared and do all the administrative stuff that allows them to get there, but once we get to the Games, it’s really being their cheerleader, being their support system, and making sure that they know that people in the stands are there to support them and cheer them on. Ultimately it’s our goal to make sure they succeed and enjoy the experience.”

In his role as chef de mission, the Brock undergrad in physical education and masters grad in education oversees a staff of 24. He has been prepared well for the role having previously served as mission staff, core team lead and assistant chef de mission in six previous winter and summer Canada Games. The Orleans, Ont., native agrees it is much different to be the person in charge of it all.

“It’s definitely a different feel, but I’ve been fortunate enough to be a partner of Team Ontario for the last six Games in different roles and every Games is different. It’s a different host community, a different climate and geography and memorable moments, but for me this is definitely an honour to be leading the contingent for this particular Games.”

Sevor feels being the host province is extremely important and special moment because it doesn’t happen often. Ontario last hosted in 2001.

“It’s very important to be a gracious host. I have roots in this area as well, so it’s very very special to me in that regard.”

Being back at Brock has been a homecoming of sorts for Sevor.

“The whole environment has changed with all the legacy facilities that are here. The familiarity with the campus and just being here lends itself to that whole experience, and again, being the host province and being the leader, seeing all these athletes here competing and doing their best, it’s just fantastic. It’s a very special moment for me to be quite honest.”

Sevor would love to take his chef de mission duties to another level and serve in that role internationally for Canada.

“I’m a passionate sport enthusiast. I’m fortunate enough to continue in my role for the 2023 Canada Winter Games that will be six short months after this, but going on to other events such as international events, Olympics, Paralympics, Commonwealth Games, whatever it may come down to, that would be definitely a goal of mine sometime down the road as well. I’d love to do that.”

His role as chef de mission for the Canada Winter Games in PEI is already on his plate because that event starts in mid-February.

“It’s been very taxing in terms of just having a lot of different focuses. Obviously the focus is on 2022 and just making sure that we bring that focus and excitement but we’re also preparing for the 2023 Games as well. But my eyes are on 2022 and all the athletes and participants, right here, during the time right now.”

Sunday will be the most hectic day for Sevor and his staff.  The 2,320 athletes from Week 1 of the Games will depart and be replaced by a further 2,364 athletes.

“It’s trying to get all the logistics sorted out in terms of their belongings, making sure that the Week 1 athletes and teams are ready to get their equipment set and transported home and then, at the same time, preparing for that same kind of energy and excitement for the Week 2 athletes to come into this environment. Turnaround day is a very, very busy day for all of the provinces and territories.”