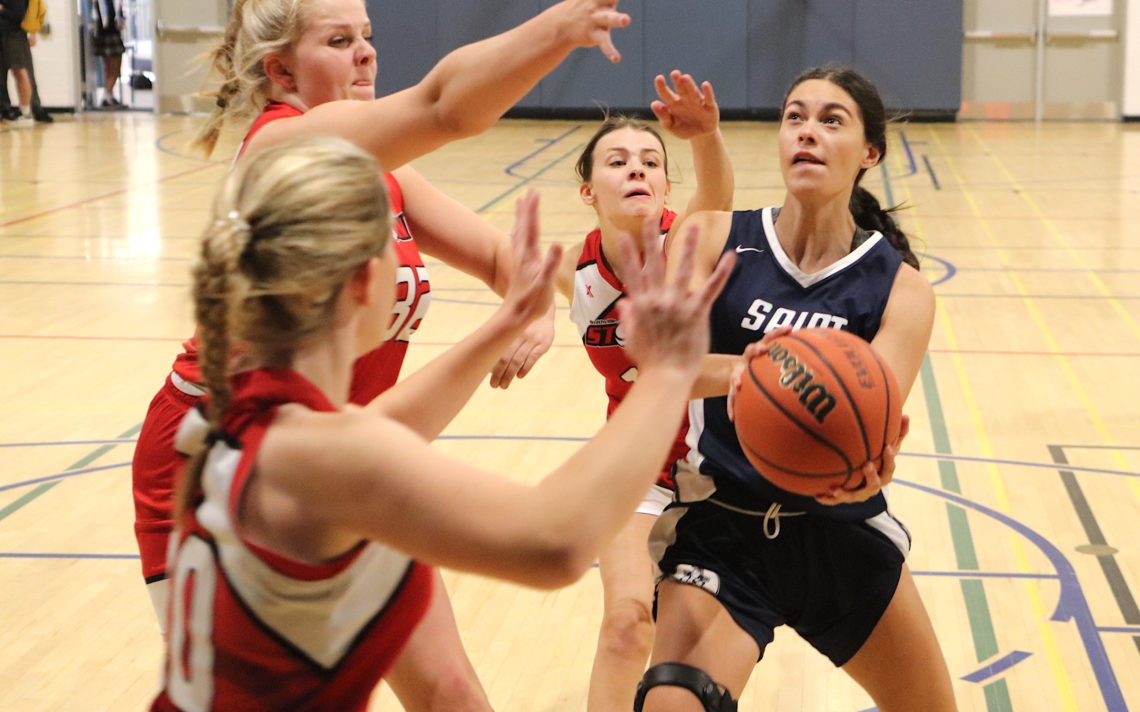 No one is happier to see Ava Stranges back on the basketball court than Kristin McDonald.

The Saint Paul senior girls basketball coach had a front row seat Tuesday as Stranges poured in 29 points to lead the Patriots to a 54-51 victory over the Smithville Christian Storm in opening-round play at the Second Annual BPSN Girls Basketball Tournament at Eden.

“She is a great player and a game-changer. She is an awesome scoring machine, is great on defence and she knows the game inside and out,” McDonald said. “We didn’t have her last year because she hurt her knee and it was a very disappointing year for her and us as well.”

The Grade 11 student was looking forward to her first year of senior ball last fall when things came to an untimely end.

“I was at a basketball practice with my team and I got hit on the knee and my ACL and meniscus tore. I got surgery pretty fast so that was good and I have been cleared to play now for about three weeks.”

She admits it was a difficult year rehabbing her knee.

“It was really tough watching my team play and not being able to compete with them. It was obviously very frustrating but it was something I had to work through. It made me a better player and I realized how much I loved the sport and how much I wanted to get back.”

She kept working even during the rehab.

“I went to the gym a lot and practised my shooting because that was something I really wanted to get better at,” she said. “I was doing that and going on the treadmill to build up my endurance to be ready to play games like these.”

She is not sure what her basketball goals are quite yet.

“I just want to continue to get better and hopefully get some sort of scholarship.”

Tuesday’s game was a tale of two halves for the Patriots; a dominant first half following by hanging on for dear life in the second.

The Storm trailed 23-6 after one quarter and 39-22 at the half before roaring back to make the game a thriller at the final buzzer.

“That was exciting to watch,” Smithville coach Derrick DeKlerk said. “The big change we made was on our defence and trying to top their three-pointers from going in. I think that helped us out a lot and then we just worked the offence that we normally work.”

The Storm returned two starters from its Ontario Federation of School Athletic Association’s A championship squad of a season ago and the team is looking to have another great run.

“We plan to make it to SOSSA (Southern Ontario Secondary Schools Association) and go right to OFSAA as well,” DeKlerk said. “We hope to win.”