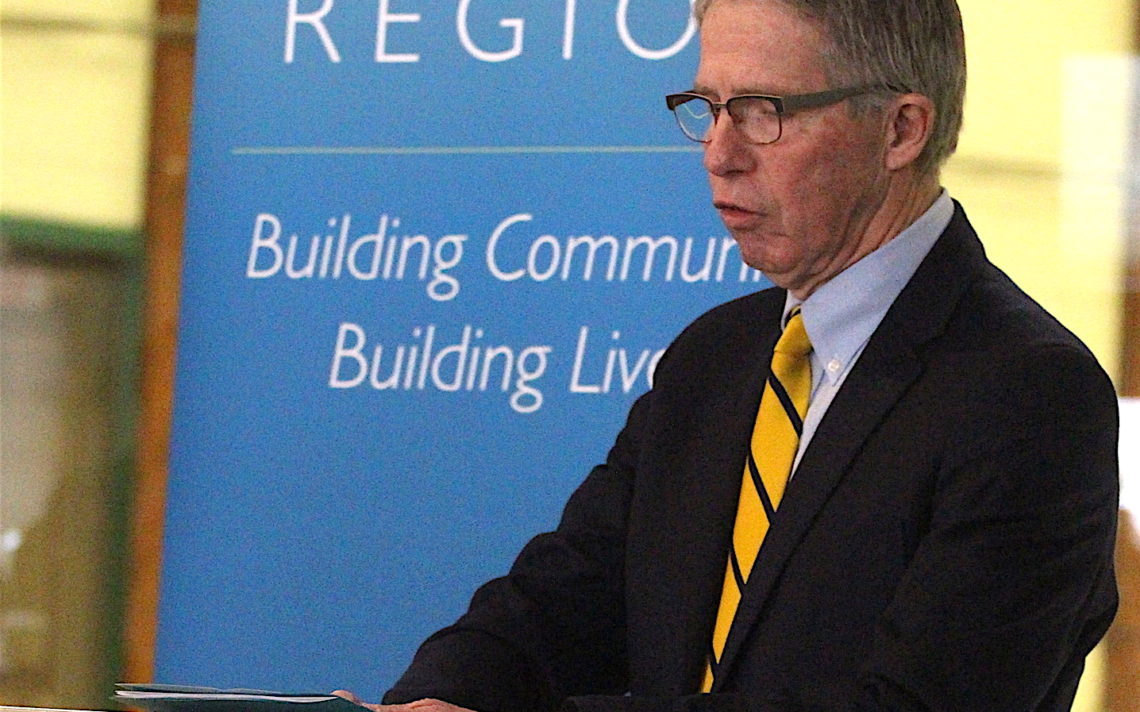 If Doug Geddie has his way, St. Catharines will be overrun with curlers in March of 2020.

Geddie announced Monday at the St. Catharines Golf and Country Club that a letter of intent has been submitted to Curling Canada to host the 2020 Brier Men’s National Curling Championship at the Meridian Centre.

“This is the biggy, there is no bigger curling championship in Canada than the Brier,” said Geddie, Chair, Bring the Bid Committee. “The traditions are fantastic.

“It would be a dream come true to have a Brier come here. It’s been all over Canada and if we could get it here, it would be a first for the region.”

Geddie said the success of the 2017 Scotties Tournament of Hearts at the Meridian Centre played a big role in feeling confident St. Catharines and Niagara would be able to pull off hosting the event.

“After the fabulous success of the Scotties in 2017, we have a lot of interest and enthusiasm to host another national curling championship and the Brier is the biggest and best of them all. It’s great for curling and wonderful for the community and we hope we can bring the nation to Niagara in 2020.”

The Brier involves 16 teams, coaches, families and fans from across Canada. Estimated attendance is between 75,000 and 100,000 for the nine-day event and over 500 volunteers will be needed.

A minimum economic impact estimate of between $11 million and $15 million can be expected, according to the Canadian Sport Tourism Alliance.

Geddie said between $750,000 to $1 million will be budgeted to offset the expenses associated with the bid.

The committee is off to a good start in that area with the City of St. Catharines pledging a $225,000 grant while also waiving the arena fees for the championships which amount to about $200,000. As well, the city has agreed to spend between $50,000 and $100,000 on construction of a downtown event centre and entertainment hub on St. Paul Street which will be called BrierTown.

Geddie said additional support could come from the Tourism Partnership of Niagara as well as the province.

“We know other provinces have put up big, big bucks,” Geddie said. “We’re probably getting more municipal money than other locations have but we still have to go after the provincial money and see if we can get our $600,000 or $700,000 up closer to $1 million.”

St. Catharines MPP Jim Bradley loves the idea of a Brier in St. Catharines, but fell short of offering a specific number regarding government support.

“The reputation of St. Catharines and Niagara for hosting sporting events goes well beyond our borders and beyond the borders of the province of Ontario,” he said. “What we have here is a reputation for holding events here and doing so successfully.”

The Region of Niagara has matched St. Catharines’ grant with another $225,000.

“The Brier would be another key opportunity to show the world that Niagara is a winner when it comes to sports,” Niagara Regional Chair Alan Caslin said.

St. Catharines mayor Walter Sendzik is a big proponent of the championships.

“We have shown that St. Catharines’ Meridian Centre is a world-class sports facility and we are an attractive destination for major tournaments,” he said.

The St. Catharines Golf and Country Club would be the host club and would be responsible for arranging and supervising the volunteers.

As part of the application process, site visits are expected to be made this summer with an expected fall announcement of the winning site.

Tickets are already on sale at www.bringthebrier.ca.