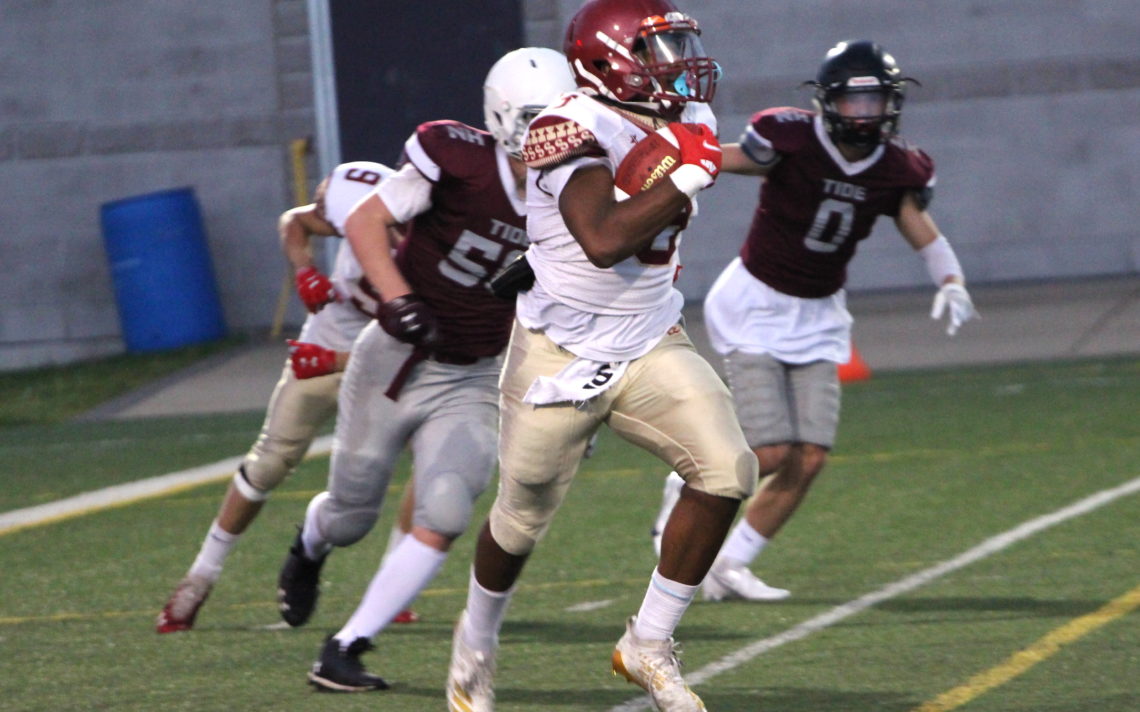 The Niagara Spears travel football teams were given a rude welcome in Essex this past weekend.

The Varsity team lost 44-7, the junior varsity team fell 48-0 and the bantam squad dropped a 61-7 decision.

The Niagara Spears varsity football team fell to 1-1 in Ontario Summer Football League play with a 44-7 road loss to the Essex Ravens, the 2021 fall provincial champions.

Essex built a 21-0 lead before Niagara responded with a TD on a six-yard Marshall McCray QB keeper. The major was set up by 42-yard pass from McCray to Jacob Tessier. Daniel Lewis kicked the extra point.

The Ravens led 23-7 at the half before outscoring Niagara 21-0 in the second half.

“We had some really good moments during the game, but we couldn’t capitalize on them and we had some really poor moments,” Niagara head coach Brian Duguay said. “We really overpursued and left a huge cutback lane and there were a couple of balls just overthrown. I felt like we were five years old, focusing on the ball and we forgot about playing our positions.”

The Spears weren’t happy with the result but Duguay described it as a learning experience.

“We will put in the work to get better. We need to rebound next week. As I tell the players, life is a roller coaster, enjoy the down but work harder on the ride up. This group of players is determined and have the talent, they just need to believe.”

The Spears host the Peterborough Wolverines Saturday at 8 p.m. at Kiwanis Field.

“It was a long bus ride home for the JV Spears after a disappointing loss to the Essex Ravens,” head coach Grant Owen said. “Despite the loss, the boys kept their heads up and played fast and tough until the very last whistle.”

Owen is far from discouraged.

“The JV team will learn and grow from this experience and put this tough loss in their rear view mirror,” he said. “We don’t win or lose, we only win or learn.”

Making key contributions for Niagara were: quarterback Johnny Breen, 16-27 passing for 75 yards; Jayden Gurzi-MacDonald, 13 carries for 56 yards for an average of 4.3 yards per carry average; Jacob Ranger, seven total tackles and one pass defended; and, Kade Martin, a blocked pass at the line of scrimmage that he nearly intercepted and a blocked point after attempt.

The Spears host the Peterborough Wolverines Saturday at 4 p.m. at Kiwanis Field.

The Niagara Spears bantams fell 61-7 to the Essex Ravens.

“Overall, the boys played as hard as they could but the errors on the field and injuries  were insurmountable this time around,” Niagara head coach Austin Huh said. “The bantam Spears team will learn from this experience moving forward and continue their quest for excellence. Tough times don’t last, tough people do.”

Huh felt here was plenty to cheer about, most notably a third-quarter kick return major by Liam Finley.

“The Spears team may have found their offensive identity by executing their dynamic aerial offence. The defence displayed true guts and determination and clogged up the middle to stop the interior run offence,” he said. “The secondary learned from last week’s contest versus the Generals and did not let any explosive vertical pass plays against the Ravens. Lastly, the Spears defence rallied to the ball carrier and made several gang tackles.”

The Spears visit the Cambridge Lions Saturday at 7:30 p.m.