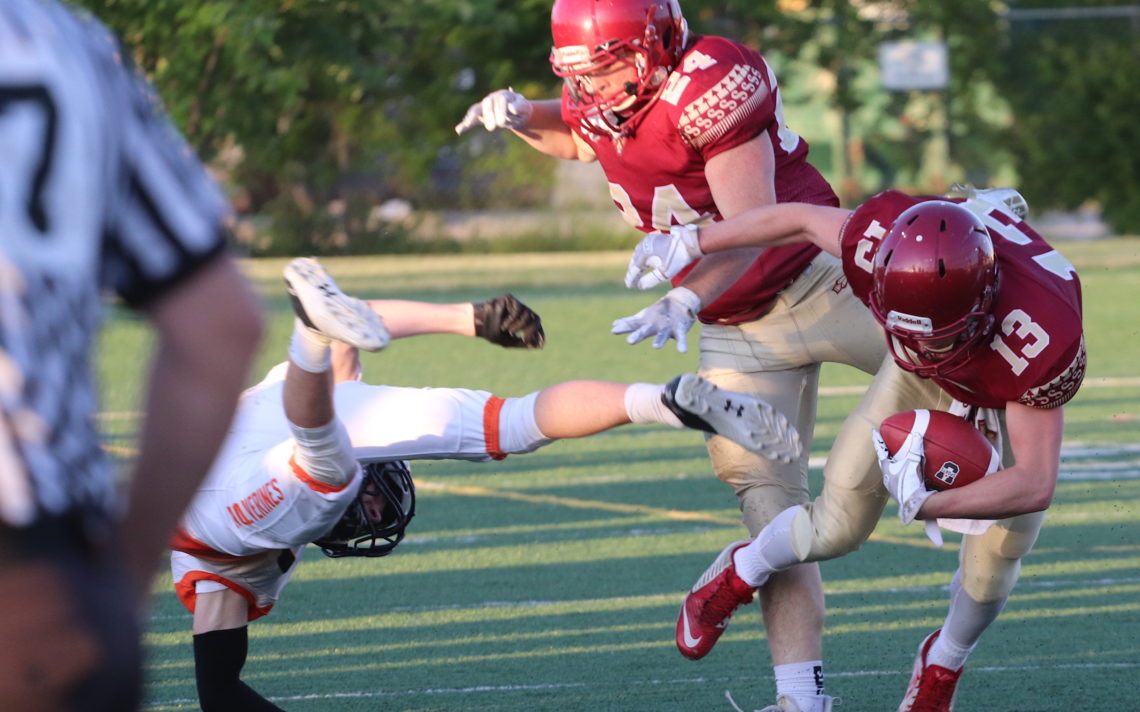 Justin Savoie’s first-ever touchdown run in a Niagara Spears’ uniform was a carbon copy of several runs he had last fall with the Sir Winston Churchill Bulldogs varsity football.

The Grade 11 student went straight down the middle and ran over two or three would-be tacklers to score from seven yards out Saturday night to help the Varsity Spears defeat the visiting Peterborough Wolverines 49-7 at Kiwanis Field.

Savoie knows his power runs have a positive impact on his teams.

“It raises the intensity and everyone gets hyped on the sidelines.”

He has come into his first Spears season with a number of goals in mind.

“I want to drop my weight, I want to get a lot faster and for this season I want to do very well on special teams. I am a young guy on this team.”

The 16-year-old St. Catharines resident hasn’t set a specific target for how much weight he wants to lose but his methods are clear.

“I am working out six days a week and I am in a caloric deficit diet.”

His 2,000-calorie diet has him a little hungry at times but he feels the hunger pain is worth the gain.

Savoie is enjoying his first season of Niagara Spears football.

“It’s very nice. I like my teammates, the coaches are great and the intensity is aways high.

Spears head coach Brian Duguay is a big fan of Savoie’s play on offence and on special teams.

“I like the way he played high school ball and I was really happy when he came out,” he said. “He’s the type of player who comes out to practice and practises how he is going to play.

“The way he came out at the beginning of this game, making tackles on special teams, you have to get him in the game. He is going to make a difference.”

Niagara improved to 2-1 in Ontario Summer Football League play and bounced back nicely from a 44-7 road loss last weekend to Essex.

“There’s no excuses but we played a team that played fall ball. They had their systems in place and they had the majority of their team come back,” Duguay said. “We took a beating but this was a nice way to come back. We made a lot better plays on defence and on offence we were able to roll.”

Niagara might have been able to put the game out of reach even sooner if not for the 110 yards in penalties it racked up before the third quarter ended.

“We cannot play that way,” Duguay said. “That is a lot of ground that we give up and we gave up a touchdown on one and then we gave them a touchdown. That’s 14 points and in a game 14 points is going to kill you.”

The Spears flexed their quarterback depth against Peterborough with all four quarterbacks on the roster — Marshall McCray, Jackson Stewart, Xavier Zatylny and Matt Murray — leading Niagara to touchdown drives.

“It was really nice to see and nice for the offensive line and running backs that we were able to establish a running game,” Duguay said. “We have relied heavily on passing the first two games and we didn’t set up a running game. Now we have a running game that teams are going to have to take a look at.”

BPSN Player of the Game: Justin Savoie with a seven-yard TD run and a strong game on special teams.