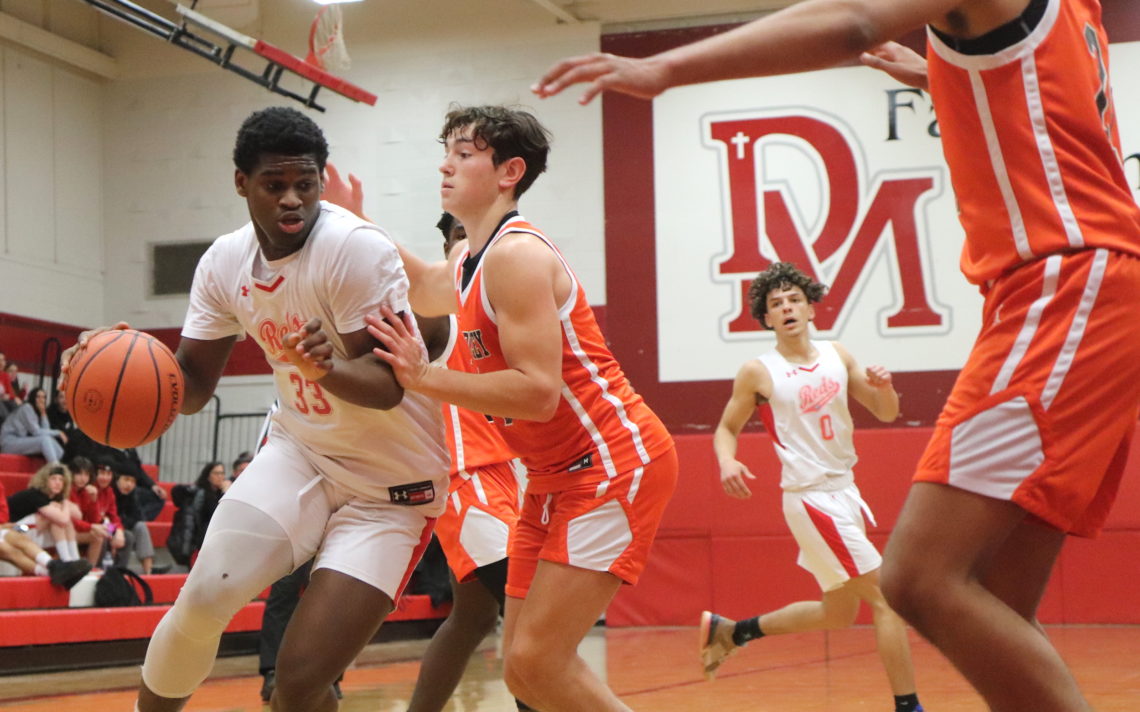 Ridley College’s Jude Mbaziira showed a flair for the dramatic Monday on the opening day of the BPSN Best of Niagara Boys Basketball Tournament.

The Grade 9 player hit a three-point shot with 7.1 seconds in the game to lift the Tigers ton an upset 49-48 victory over the Denis Morris Reds in first-round action at Denis Morris.

“I was so happy I hit that. I have been practising my shot and I know I have a good shot so I decided I was just going to take it,” the 14-year-old St. Catharines native said. “I saw my teammates calling for the ball but if I had a chance I was going to shoot it. It went in thankfully and it won the game.”

He had no idea how much time was left when he shot the ball.

“His shooting will need to improve as he gets older but he saved one for the end when we needed it,” Ridley College head coach Josh Doan said. “I am happy for him and it is a great moment for him with all his friends here.”

He loves what Mbaziira brings to the court.

“He’s cool under pressure, the game is never too big for him and he doesn’t make a ton of mistakes for his age,” Doan said. “He is a great basketball player and you are going to hear his name as he grows older. He is a gym rat and you can’t get him out of the gym. He is in there 24/7.”

“He is going to have a long career with us and I would think he is probably going to be on the (Ridley) prep team sooner or later. We are happy to have him in our program right now.”

Mbaziira is working hard on his game.

“Every day before school I am working on my shot. I get up at 6 and I am at the school before 7 and then I usually stay in the gym after school until 7,” he said. “I repeat that every day because I have big basketball dreams. I really want to make the league (NBA) so I have to work hard for it.”

He is hoping to make the Ridley prep squad by next year and then head to the States to play prep basketball in Grade 11. In addition to Ridley, he plays for the Niagara Falls Red Raiders and the Burloak Elite AAU squad.

Ridley trailed by double digits in the second half of Monday’s game before rallying for the victory.

“We are a young team that hasn’t played in two and a half weeks and I am proud of them. As a senior team, it is kind of hard to stick with it and get our feet wet,” Doan said. “We gave them a lot of freebies in the second quarter and for them to battle back and work on what we’ve been doing was great. We tried to keep it simple today and we got there at the end. I am proud of how they closed the game out.”

Denis Morris coach Michael Doodeman didn’t seemed too concerned with the loss and was happy that he was able to get all 16 players on his roster some floor time.

That was by design.

“That was our main focus,” he said. “The regular season is over and I wanted to get everyone playing in this tournament. We have a big team and every practice during the season we had almost 16 out. It was a reward. We also have a lot of Grade 11s on the team who will be stepping up next year and they will benefit from this playing time.”

Cat’s Caboose Player of the Game: Ridley’s Jude Mbaziira with the game-winning three pointer with 7.1 seconds left in the game.

The St. Francis Phoenix advanced to the BPSN semifinals — they have a quarter-final bye — by defeating the Greater Fort Erie Gryphons 89-33 Monday.

St. Francis will play in the championship semifinals Wednesday at 7:30 p.m. against either A.N. Myer or Eden.

The E.L. Crossley Cyclone advanced to the BPSN quarter-finals with a 87-36 victory over the Saint Paul Patriots Monday at Crossley.

Crossley plays in the championship quarter-finals at Denis Morris versus Ridley College on Tuesday at 3:30 p.m. at Denis Morris. Saint Paul advances to the consolation semifinals Wednesday at 3 p.m. at Churchill.

The top-seeded Sir Winston Churchill Bulldogs advanced to the BPSN championship semifinals Wednesday with a 73-41 triumph over the Lakeshore Catholic Gators Monday at Churchill.