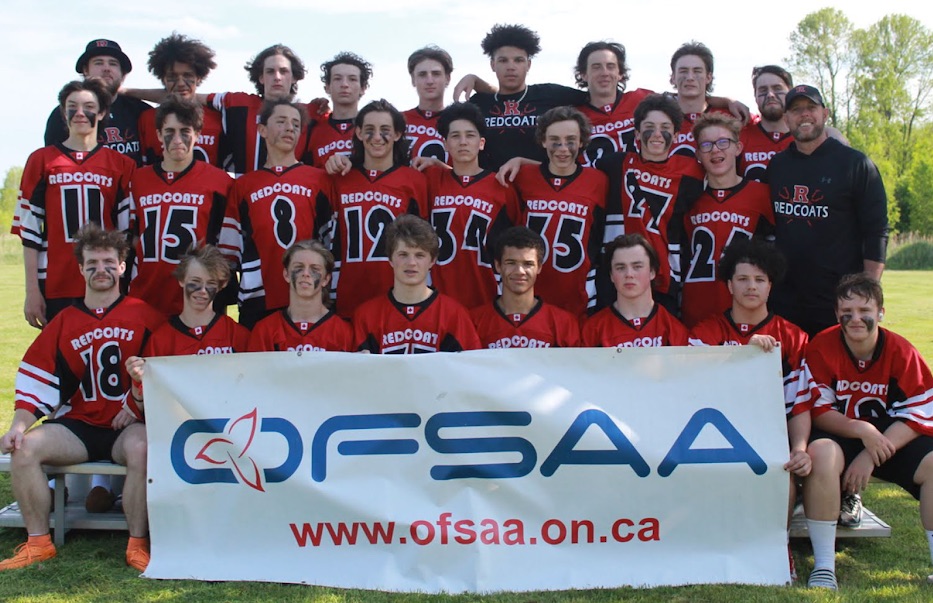 Redcoats mine silver at OFSAA

The Governor Simcoe Redcoats boys field lacrosse team knew early on it had a chance to do something special this season.

“The first practice we saw all the people who had come out and the talent we had. It was ‘OK. We really have a shot here and let’s put something together, make a plan and start really building for the year,’ ” co-captain and goalie Oliver Vanyo said.

The Redcoats would end up winning a silver medal at the Ontario Federation of School Athletic Associations field lacrosse festival in Owen Sound.

“We had lots of depth, lots of talented players and a great goalie which a lot of teams don’t have,” co-captain Colton Armitage said.

But it was more than talent that made the team succeed.

“A good lacrosse team works all the way down and you can’t just do it with your studs,” coach Jamie Brophy said. “We have buy-in from all 24 and that was massive.”

The squad was also loaded with intangibles.

“It started off with a great group of guys at the beginning of the season and being with each other every day after school played a role for us,” co-captain Tye Steenhuis said. “We developed bonds, we were all together and we all worked as one throughout the season. Our end goal was an OFSAA gold medal and we came close.”

“We are a school team so we are all together through the four periods of the day. It was coming together after school every day and hanging with your buddies to play lacrosse. It was a lot of fun.”

Armitage credited one other attribute of the team.

“It was the hard work we put in inside and outside the school.”

The team captains pointed to a number turning points in the season.

“It was going undefeated in the regular season and winning SOSSA (Southern Ontario Secondary Schools Association),” Armitage said. “That gave us the momentum going into OFSAA.”

Vanyo felt the SOSSA semifinals were a pivotal moment for the team.

“Throughout the season, we had been able to win quite handily and we didn’t face much adversity. We played Holy Cross in the SOSSA semifinal and that was the first really good team that we played against. All the kids who hadn’t played much saw what a full game was like and what that experience was like,” he said. “That was what we would be facing at OFSAA and it kind of set the tone for the final stretch of the season.”

The game against Holy Cross was close at the half before the Redcoats took control in the second half.

All the captains and the coach were thrilled to have Simcoe lacrosse return after a two-year absence.

“It was great for our seniors to have the opportunity after a few years where COVID took all of those championships away,” Brophy said. “Having them have this opportunity to showcase their talents not only at the school level but also at the OFSAA level was wonderful for them and for the school in general.”

It was the first real chance for Steenhuis to experience Simcoe lacrosse.

“It was really nice for me because in Grade 9 I had a broken arm and I missed that season,” he said. “Then 10 and 11 were obviously stolen by COVID so it was nice to play again and be able to play with my brother.”

“It is really good to represent your school, especially in a sport that I really enjoy. We haven’t really had much success with lacrosse at Simcoe but I am super proud that we were able to have a huge run and make it all the way to OFSAA.”

At OFSAA, the Redcoats defeated St. James 12-2, Huntsville 13-4 and McKinnon Park 13-11 before losing 11-9 to Holy Trinity in the final. Simcoe was leading the final 8-3 and then got into penalty trouble.

Brophy feels the OFSAA medal is a great lead-in to the school launching a lacrosse-focused course in the fall. It is the first time the course will be offered at a District School Board of Niagara high school.

“It will allow students to learn about the game, its importance to the Indigenous communities and to celebrate the game.”

The course will have a classroom and technical component and students will learn about playing, coaching and officiating the sport.

“We will start with the grassroots part of the sport and we will also be building on the elite athletes that we already have,” Brophy said.

The course will launch as a senior course open to all students and then next year it will be offered at both the junior and senior levels.

Vanyo is coming back for his 12B year and is hoping the team can take care of unfinished business.

“We have a group chat on social media and we have already renamed it OFSAA Gold 2023. About 90 per cent of the roster from this year is coming back and that’s the goal.”

Armitage may or may not come back for his 12B year but he knows the program is in good hands.

“In Grade 9 we were just a mediocre team and then COVID kid of screwed our future,” he said. “We have a bright future now because there is lots of talent coming in the younger grades.”