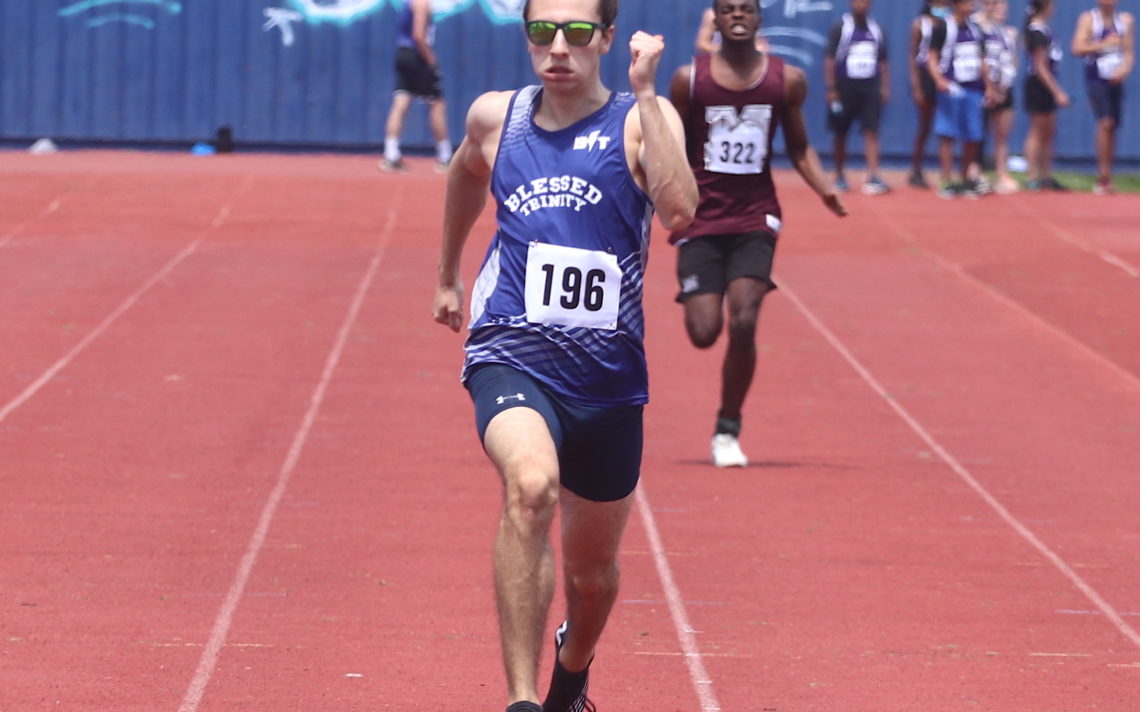 Zavio Prato got off to a great start in his running career.

“At a track meet one year, my teacher told me that I was really good and that I should join a club. She referred me to one, I went to check it out and I joined,” said the Grade 11 student at Blessed Trinity, after winning the senior boys 200 and 400 metres at Wednesday’s Niagara Catholic Athletic Association track and field meet held at the Niagara Olympic Club.

He was also doing soccer at the time but after about six months he decided to quit soccer to focus on running.

“That year I got to go to nationals in Nova Scotia. I also got to compete for a spot for Team Canada in a meet in Italy and I came first,” the 17-year-old Grimsby resident said. “I was glad I quit soccer otherwise I would not have had those opportunities.”

The Italian meet was in September of his Grade 9 year. Unfortunately, the COVID 19 pandemic wiped out his first two high school seasons of track and field.

“I did some competitions here and there but nothing big and now I am back for my first full year,” Prato said.

Like all athletes, Prato struggled with training through the pandemic.

“It really sucked because you are training, but for what?” he said. “The time that was the worst was training at home on my own with no one around. I had quite a lot of injuries I had to deal with as well along the way. There was at least one every season.”

Thankfully, the injury bug has gone away except for a mild case of shin splints.

He is thrilled to be finally able to compete for Blessed Trinity.

“It is really nice to have my first high school season and the (BT) singlets are also pretty soft and nice too,” he said. “I am not minding that at all.”

Prato was pleased with his performance Wednesday.

“The 400 I wasn’t going full out because all I wanted to do was qualify. I wanted to pace it, be smooth and not too fast. I didn’t expend a whole lot of energy which is kind of the goal,” he said. “The 200, I think it went great but they told us they had to run it again because they didn’t start the time.”

He would end up winning the race again later in the day.

“My goals are to get to OFSAA (Ontario Federation of School Athletic Associations championships) but I am in the bottom year (Grade 11) so I am not looking to get first by any means. I want to make the final and maybe place in the top four in maybe the 200 but mostly the 400.”

To get to his goal will require improving at every meet along the way.