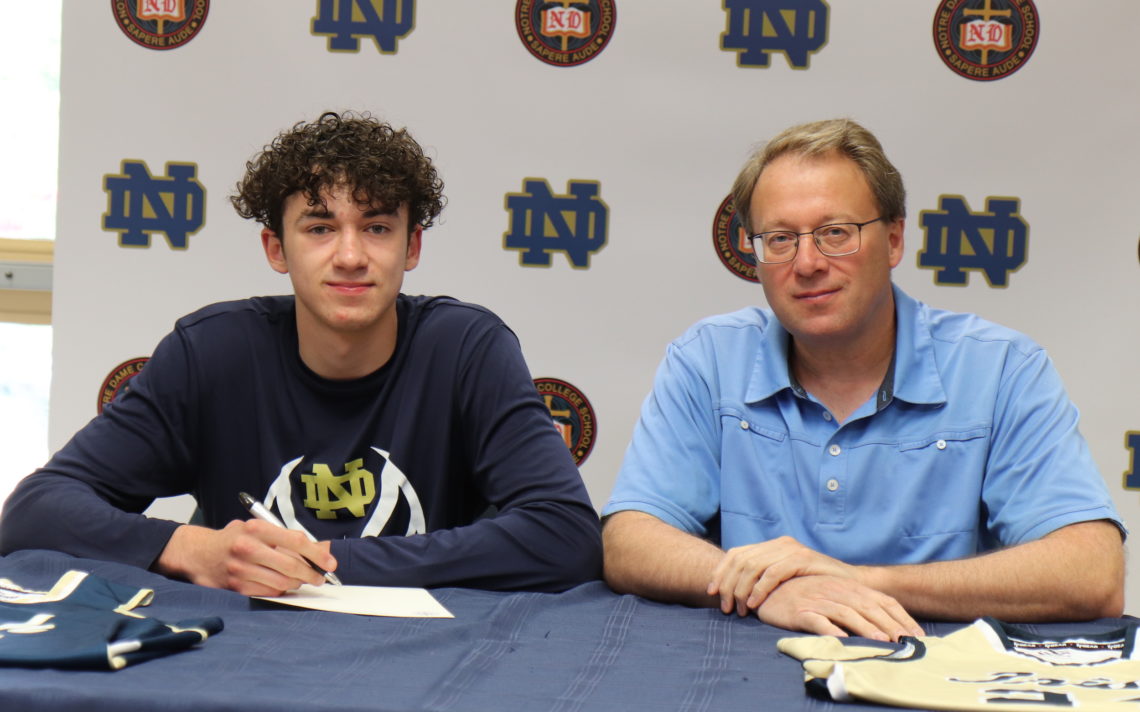 In life and in sport, it is hard to underestimate the value of making a good first impression.

Notre Dame senior boys basketball head coach Mark Gallagher took it upon himself to send video of Lucas Ponting playing to a number of Ontario University Athletics programs and one of the teams that took the bait was Queen’s.

It invited him up to visit the Kingston campus and scrimmage with five other recruits against 10 current varsity players.

“He was playing against university players and he more than held his own,” Queen’s coach John Curcio said.

“That’s part of the recruiting game. Sometimes you stumble across something or someone you weren’t expecting and the last couple of years there has been a bit more of that because kids haven’t played,” Curcio said. “Full credit to Mark for reaching out and doing some legwork on his behalf.”

Ponting was put on a team with some of Queen’s main guys and starters and in typical fashion, they weren’t making him the primary or even secondary scoring option.

“Towards the end of one of the first games he played in, he got a rebound, took it the length of the floor and scored on a really creative, high level turnaround jumper,” Curcio said. “The coaches looked all looked at each other and thought, ‘There is something there.’ The film Mark sent, you could tell the kid could score at three levels and that was obvious. The difficulty with evaluating film is that he was doing it against high school players and it is hard to gauge.”

The coaches were impressed with Ponting’s confidence.

“Sometimes recruits come on campus and they are passive but he waited for his time as the games were going along,” Curcio said.  “He was quiet and all of a sudden he got the rebound and went coast to coast. The rest of the night he is banging down threes, he’s scoring inside, he is blocking shots and he is rebounding. When we first saw him on film, it stood off the page that he could score.”

The question was whether could he score against university players and the Grade 12 student answered that question in the affirmative.

“Once we brought him on campus and watched him play, it was pretty obvious the kid had a bright future,” Curcio said.

But nothing will come easy for Ponting. Queen’s is a top five team in the country and 17 of 19 players are returning from its 2021-22 roster.

“At the end of the day, if he is ready to play from Day 1, he will play from Day 1 but the likelihood of guys moving over to give him a chance is very unlikely. We are a good team and we have some guys who are pretty good. They are not giving up their spots,” Curcio said.

Ponting is lacking the game experience he would have received if not for the pandemic and he will have to overcome that.

Ponting, who started playing basketball when he was in Grade 3 and suited up in travel basketball with Niagara Tigers, Niagara United and the Pelham Panthers, quickly realized Queen’s was his preferred destination.

“I went for a visit and I just loved the school,” the 17-year-old Welland resident said. “The campus was really nice, I am going for business and they have one of the best business schools in Canada. And I scrimmaged with the team and I thought I fit in really well with what they were doing.

“I knew I wanted to got there right away because it felt like a perfect fit both basketball and school.”

The 6-foot-5 player can’t wait to get started.

“I am looking forward to playing basketball at the next level and also moving away, being by myself a little bit and being more independent.”

His goals for his rookie season are simple.

“I want to try and get any playing time I can and get better.”

His game is continuing to evolve.

“I grew a lot over the pandemic and this year my athleticism sort of caught up. I also improved in all the skills; shooting, rebounding and passing.”

He admitted it took awhile to get accustomed to the five inches he grew during the pandemic.

“It was a bit of a challenge. In Grade 11, I couldn’t even dunk but now I can dunk easily. It took about a year and then over time I caught up.”

He knows what is next step needs to be.

He’s going to hit the weight room and work on his skills.

Gallagher is thrilled for Ponting.

“He is getting the opportunity of a lifetime, he’s going to a great school, a great team and a great program.”

His opportunity at Queen’s is well-deserved.

“You can’t do the things that Lucas can do with a basketball unless you have put in a ton of time,” Gallagher said. “Over the last two years, with COVID, no seasons and we only played seven games this year, he has done a ton of that on his own. You have to give him a world of credit for that.”

This season, Gallagher noticed immediately Ponting had taken his game to the next level.

‘We were very limited this season but you could see right away that he was capable of doing things that other kids just couldn’t do,” he said. “He’s tall, he is long, he is stronger than people think and he can really shoot the ball. There is only one way to be a great shooter and that’s to shoot it a ton and he has obviously done that.”

But there is work yet to be done for Ponting, who was a member of the Pelham Panthers under-18 squad this past season.

“The most obvious thing is that he needs to get stronger. There’s a level of seriousness at the USPORTS level where guys are in the gym all the time, there are individual workouts, there’s weightroom time, there’s practice and video sessions,” Gallagher said. “There’s stuff we haven’t been doing the last couple of years for obvious reasons that he will need to adapt to but they are thrilled to get him and they think his potential is unbelievable. Once he gets there on campus and starts doing the things they do, they think he has a chance to be a really, really good player.” 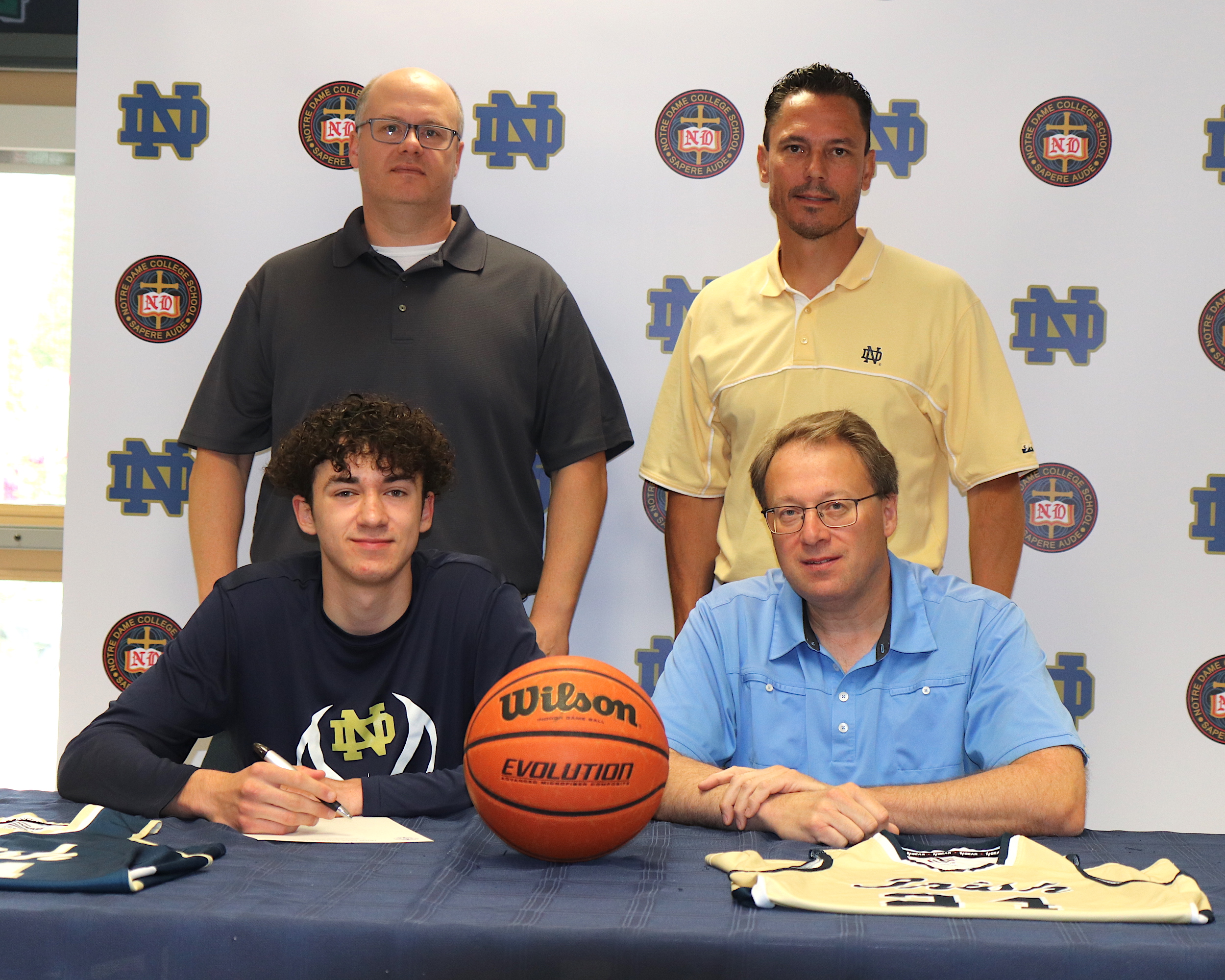 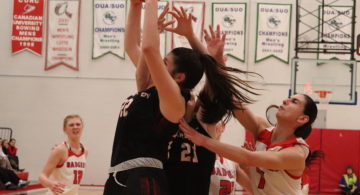