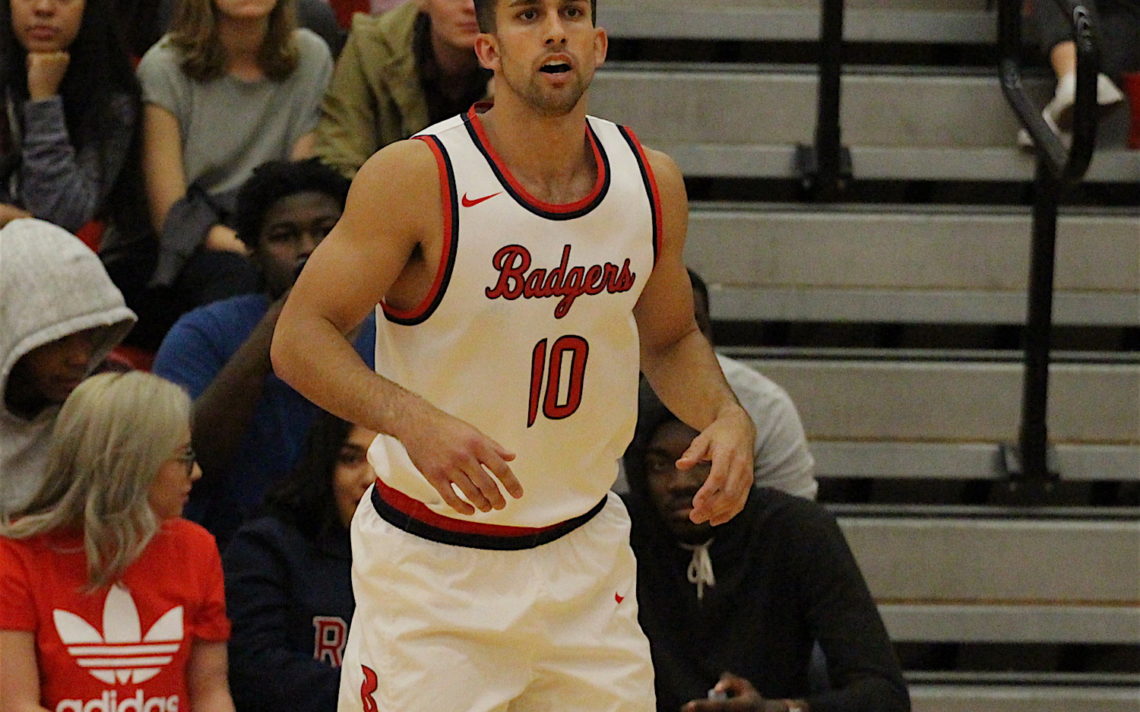 After a two-year absence from basketball, Pat Pilato has returned to the court as a member of the Brock Badgers men’s basketball team. Photo by BERNIE PUCHALSKI

“As soon as I started playing basketball, I fell in love with the game and I put every ounce of sweat and tears into the game and getting better,” the 23-year-old St. Catharines native said.

At St. Francis, he would show up at 6 a.m. to work on his shot and would stay late when practice ended after school.

He was the definition of hard worker.

After graduating from St. Francis in 2013, the two-time winner of Mr. Niagara Basketball, awarded to the top high school boys basketball player in Niagara, took that approach to the University of Victoria.

The 6-foot-3 guard was on Vikings’ teams that finished fourth at the national championships in 2014 and 2015 and won a Canada West championship for the 2014-15 season. He played solid minutes both years and in his final season he averaged 18.4 minutes of playing time, 4.8 points, 2.7 rebounds and 2.4 assists per game. He started a number of games at the shooting guard position and also at the point guard position.

“It was an amazing experience and I was more than happy I went out there,” he said.

But in the spring of his second year, he received a call from his sister saying that his mother Lisa had been a passenger in a vehicle that was involved in a fatality.

“She was OK other than a few broken ribs,” Pilato said. “That was really tough in my second year being that far away from home and only being able to come home at Christmas.” “That really affected my perspective on life and basketball and it made me really miss home,” he said. “After that, I lost a little bit of the fire that I used to have and I decided to come home and spend more time with family and friends.

“I needed a break from the game.”

“That inner competitor in me really missed the game and I started to train by myself a little bit and get into some pickup games,” he said. “I missed going to war every day and the game. I knew if I didn’t take the opportunity to play for Brock, I would regret it in a few years.”

“We talked for an hour about basketball and life in general and he didn’t give me any handouts or guarantee me a spot on the team,” he said. “He gave me the opportunity to make the team and prove myself.”

Pilato made the team and finds himself in a battle for minutes on a deep and talented roster with aspirations to play for a national championship in star Dani Elgadi’s fifth and final year at Brock.

“It’s definitely a challenge and I have to continue to prove myself in practice and gain his (Kissi’s) trust in games.”

Pilato hadn’t stopped working out so his fitness and strength were fine, but his skill level has declined after two years away from competitive basketball.

“I still have a long way to go to knock off all that rust that has been building up the last few years and it’s just the little things: dribbling, shooting and doing those things at a fast pace against really high-level competition.”

Pilato has been on the team’s roster for its entire exhibition schedule, including a trip to the Virgin Islands to play NCAA Division 1 teams.

“That trip was unbelievable. It was paradise and then to play against some D1 schools like Vanderbilt was amazing,” he said. “We think we should have won but we barely lost.”

Pilato feels he can help the Badgers achieve their lofty goals this season.

“Our goal since Day 1 is to win a national championship,” he said. “They think they got snubbed last year and should have made it to the Final Eight and that has definitely motivated them.”

Kissi has mostly liked what he has seen from Pilato so far.

“He hasn’t played in two years and sometimes it shows, but he’s working his way back,” Kissi said. “He has the ability to help us, but he has to get accustomed to how we play and get tougher.”

Sullivan, a former assistant coach with the Brock men’s team, believes Pilato can help the Badgers

“The key for Pat will be to consistently look for and knock down open shots,” Sullivan said.

He describes Pilato as a student of the game, who brings a number of attributes to the Badgers.

“He is a strong defensive player and can be an excellent facilitator.

It would be a dream come true for Pilato to win a national championship at Brock.

“It’s a childhood dream for sure,” he said.

Pilato was a big fan of the 2007-08 Brock squad that won the school’s last national basketball crown.

“I’ve been coached by a lot of those guys (Brad Rootes, Rohan Steen, Scott Murray and Jay Fleming) and you see them walk around with that pride and confidence of winning a national championship.” Pilato said. “You see that big fat ring on their finger and every practice we see that banner up in the gym.”

Pilato is the only player on the current roster who can boast the experience of playing in the national championships.

“I think the coach sees that and I know I’m one of the older guys on the team so I try to fill a leadership role, especially with the younger guys.”

He is extremely grateful for all his family, friends, coaches and mentors in Niagara who helped him reach his basketball goals. Among the mentors he wants to specifically thank are Fleming, Joel Whitty and Sullivan.

“They have always been there when I needed advice or some guidance.”

Pilato has three years of eligibility remaining but will graduate in the spring of 2018 with a degree in political science and a minor in business. He has yet to decide what his academic future holds after this year.