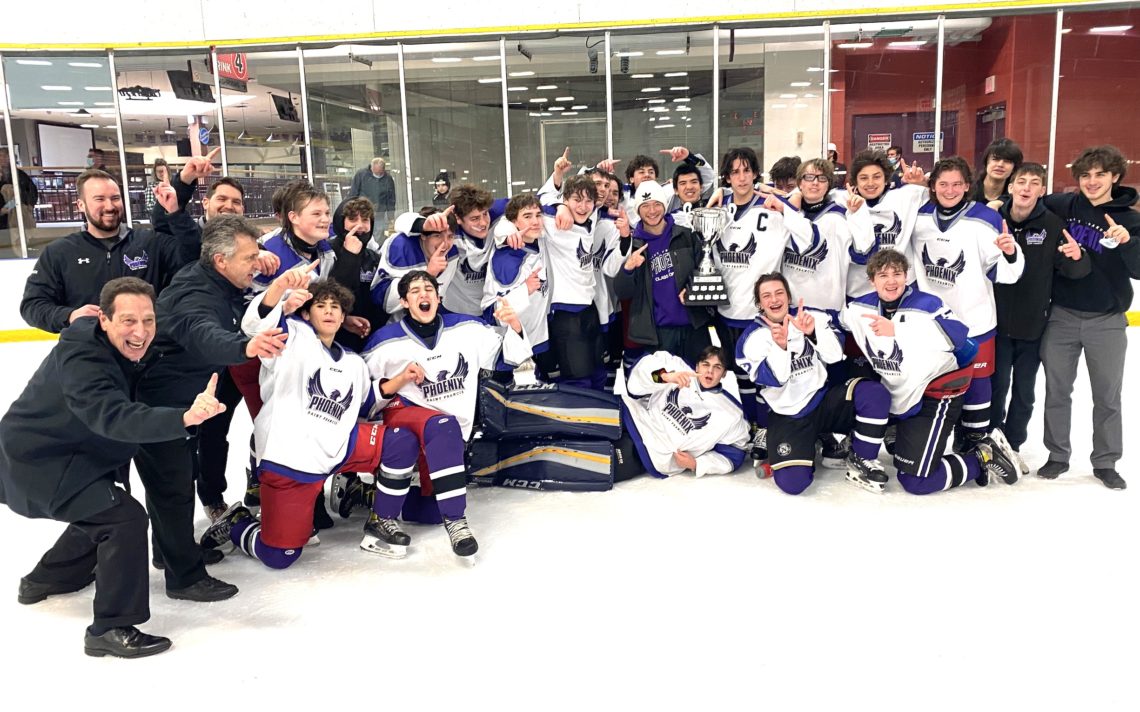 The Phoenix rallied from a 3-1 deficit to edge the Saint Paul Patriots 4-3 in a shootout to take home the hardware Tuesday afternoon at the Seymour-Hannah Sports Complex.

“It was unbelievable,” Phoenix captain Eric Venneri said. “I just can’t believe we came back.

“We were down and just had a feeling we were going to do it.”

The Phoenix trailed by two goals with just over six minutes to play before Jacob Sapienza scored to make it 3-2. Zach Gillesby’s second of the game with just under a minute to play sent the game into overtime.

Sapienza was the lone goal scorer of the six shooters (three for each team). 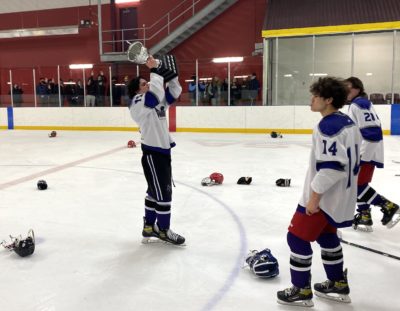 The championship was the end of the line for the Phoenix with both the Southern Ontario Secondary School Association (SOSSA) and Ontario Federation of School Athletic Associations (OFSAA) championships cancelled due to the pandemic.

“We wish we could go to SOSSA and OFSAA but we were glad to have this tournament and I’m just proud of everyone,” said Venneri, who plays major midget AA for the St. Catharines Falcons. “We had two Grade 12s today and it’s our last year. We didn’t get that many games but we were able to cherish it.”

Phoenix coach Eric Germano admitted it has been a trying season.

“We’re just lucky we even had something to do,” he said. “We’ve had quite the weird year. We lost two months and a lot of these guys are playing in their own playdowns and have their own games. Just trying to get a group of guys together is difficult, especially with guys missing with injuries or even COVID in general.

“To get these guys together for one last kick at the can, especially for our two senior players, was great and also to build something here for our Grade 10s. We have a lot of young guys. It’s awesome for them to have something like this.”

Germano would have liked to see the game continue.

“It sucks to win in a shootout. It doesn’t feel the same obviously but it’s still nice to win,” he said. “Credit to the boys for getting it back.”

“I’m very proud of the boys,” he said. “We’ve had some tough losses, a lot of one-goal games, but they played their hearts out. We had a short bench, we lost three players today, we were down to six on the bench going into overtime.

“That was one of the best games they played.”

Germano tipped his cap to the Pats.

“All credit to Saint Paul. They gave us a heck of a game,” he said.

Jaedon Colborne had all three goals for the Pats.

Dear reader. If you liked this story or one of the 3,900 other stories found on our website, please consider hitting the Support Us button on the right-hand side of our home page and making a PayPal contribution to our website. Your support would be much appreciated. If you are a business owner, please consider advertising on our site. Our rates are reasonable and we provide plenty of exposure for your business. Contact bpotrecz@outlook.com for more information.