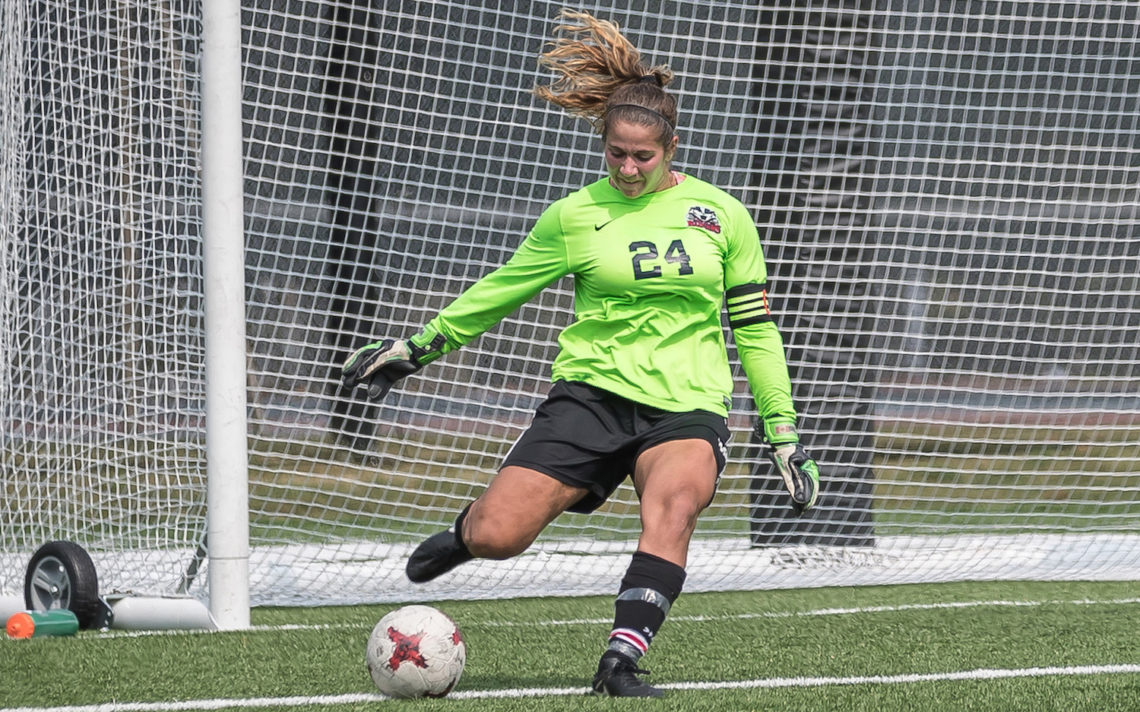 Brock’s Marilena Spagnolo is the female athlete of the week. PHOTO BY: SPECIAL TO BP SPORTS

Spagnolo, a kinesiology major, had a strong weekend in goal. In two games, she posted a 0-1-1 record allowing just one goal on 16 shots. She also posted her third shutout of the season versus Windsor.  In nine games, Spagnolo has allowed just 10 goals for a 1.11 goals-against average and currently ranks third in Ontario University Athletics’ saves with 56.

Koffman, a third-year business major, helped lead the baseball team to three victories this weekend, including a sweep over the Laurier Golden Hawks on Alumni Day. In four games, he batted .444 going 8-for-18, with a double and five RBI. He also posted three hit games versus both Laurier and Western. On the season, Koffman is currently fifth in OUA with a .436 batting average (17-for-39).

Slade, a fifth-year kinesiology major, helped lead the Brock men’s lacrosse team to victories over McMaster and Western this past weekend. In two games, he recorded seven goals and seven assists for 14 points. Slade now has 281 career points and is 19 shy of becoming just the second player in Brock lacrosse history to record 300 career points.

Slade led the way with five points while Kurtis Woodland contributed with four goals. Tyrus Rehanek added a goal and three assists and Connor Brown chipped in with the natural hat trick while Connor Ham collected three helpers. Davis Neal rounded out the Brock scoring with a single marker.

The men’s team also defeated the McMaster Marauders 22-2 on the road.

Slade continued his dominance in his senior season as he led all scorers with nine points, including four goals and five assists. Grayson Houghton had a career game registering seven goals. Nicholas Rybka added two goals and three assists while Jake Nyhuus collected the natural hat trick. Rounding out the Badgers scoring were Woodland (2G, 1A), Saul van der Zalm (2G, 1A), Neal (1G, 1A) and Alex Pace (1G).

The baseball team split a doubleheader against the Western Mustangs Sunday afternoon on the road. Western won Game 1 4-0 and the Badgers answered back with a 10-4 victory in nightcap.

The Badgers collected just six hits in the opener. Brock pitcher Derek Zwolinski allowed three runs on five hits while striking out two. Jake Near closed out the game allowing one run on one hit over one inning of work.

On the hill, Jacob Ebbs went 5 1/3 innings allowing four runs on five hits while striking out one.

The Badgers also swept a twinbill against the Laurier Golden Hawks Saturday afternoon at George Taylor Field 9-3 and 3-2.

Brock baseball also celebrated their annual Alumni Day with over 30 former players and coaches in attendance.

Koffman went 3-for-5 with a double and two RBI in the opener. Gideon contributed with two doubles and an RBI while Legg (2-for-4, RBI) and Nakamura (2-for-2, 3 runs) both chipped in with two hits each.

Offensively, Hill had a walk-off double in the bottom of the eighth.

The men’s soccer team knocked off the No. 10 ranked Western Mustangs 3-1 Saturday afternoon at Alumni Field.

The women’s soccer team played to a 0-0 draw against the Windsor Lancers Sunday afternoon on the road. With the point, the Badgers move into the sixth playoff spot in the OUA West Division.

The Badgers continued to play a strong defensive style as a Spagnolo posted her third shutout of the season finishing with six saves.

The women’s team also dropped a 1-0 decision to Western.

The Badgers prevailed 9-4 against the McMaster Marauders and 12-5 against the Laurier Golden Hawks.

Mackenzie Singer and the defence of Rachel Debon, Byers, Mel McCall, and Lyanne Martin were able to put a stop to the Marauders and Golden Hawks offensive line.

The cross country team travelled to London for the Bill Salter Western International.

Sam Robson of the men’s soccer program was named Niagara College’s male athlete of the week.

The advanced law student recorded his second shutout of the season during the team’s impressive 3-0 road victory over the Lambton Lions.

Robson has played a major role in helping lift the Knights to a 3-1 start. He has started all four of the Knights games, allowing just one goal in the process.

“Sam has been outstanding this year. He has really managed to elevate his game and has now established himself as one of the premier goalies in the OCAA,” Niagara Knights assistant coach Rino Berardi said. “Sam’s on-field leadership is a big reason why we are off to a terrific start this season.”

Kaylee Boulley of the women’s soccer program has been named Niagara’s female athlete of the week.

After suiting up for three games from her midfield position, Boulley was thrust into the Knights’ starting goalkeeping role after a pair of injuries to team’s two other keepers.

Boulley was put through a one-week goalkeeping bootcamp by Knights’ assistant coach Gerry D’Angelo in advance of the team’s September 23 2-1 road victory over the Lambton Lions and was outstanding for the Knights in the win.

“Kaylee played a confident game, saved a penalty kick, and helped seal our first victory,” women’s soccer head coach Rob Lalama said. “Just to overcome the pressure of that situation is admirable; she did a great job for us.”

The men’s soccer program stretch their winning streak to three defeating the Lambton Lions 3-0 in Sarnia. The win moves the Knights to 3-1 on the season and into second place in the OCAA West Division.

The Knights found the scoresheet early in the affair when third-year striker Carlos Williams (St. Catharines) converted on penalty kick just five minutes into the contest. The goal is Williams’ first of the season and 10th career tally, tying him for the Knights’ men’s soccer all-time scoring record with former standout Matt Miedema.

“I’m honoured to be tied for the all-time goal-scoring lead, but this season is more about the team than me. We have goals set, and each day we work towards our ultimate goal – a championship,” Williams said.

Noah DiEgidio of Welland and Marc-Andre Boucher of Niagara Falls native rounded out the scoring.

“Our fitness program paid big dividends in the sweltering heat today,” said Berardi, who helmed the sidelines for the team during Saturday’s road matchup. “As the game grew longer, we continued to dictate play and created scoring chances.”

Robson notched his second shutout of the season for the Knights.

The Knights earned a 2-1 victory over the Lambton Lions, marking their first victory of the season. The Knights are now 1-3 on the season and fourth in the OCAA West division.

Michelle Maecker of Fonthill and Kara Latham of Welland scored.