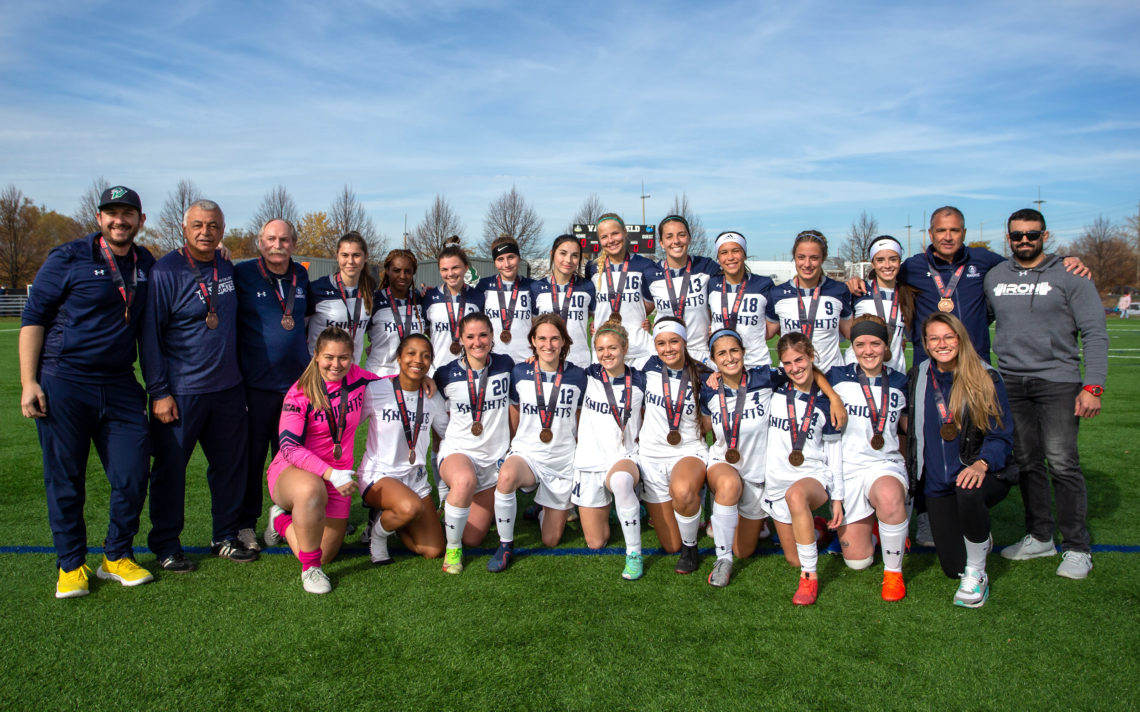 It was the first OCAA medal in the program’s history. Prior to 2022, Niagara had yet to advance past the quarter-final round at the championship tournament. Since taking over the program in 2017, head coach Rob Lalama has made six straight post-season appearances.

Niagara won the bronze with a 3-2 victory over host Durham College. The Knights jumped out to a 2-0 lead on goals by Megan Morgado and Sydney Sica before Durham tied it in the second half on goals by Ericka Bjorgum and Sage Thomas-Roberts. Rylan Greatrix scored the winner for Niagara in the 82nd minute. Sica was named the Player of the Match for the Knights and McKenna Jackson was selected to the Championship All-Star team.

Niagara opened the OCAA championships with a 5-0 blanking of Algonquin led by a hat trick from Tori Hultink and two goals from Sica. Greatrix had four assists; Natasha Desjardins had a pair of helpers and Sierra Naccarato recorded the shutout.

The Knights lost 3-2 in overtime to eventual champion Humber in the semifinals.

“The overtime loss to Humber was heartbreaking,” Lalama said. “We gave our heart and soul and felt unlucky in key calls during the game. Motivating the team for the bronze medal match after such a tough loss was a concern until I began hearing conversations amongst our players, determined not to go home without a medal. At that point, what more can you ask for as a coach?”

Desjardins and Sica scored for Niagara in the semifinal loss.

The Niagara College women’s basketball team opened its season with a 97-48 drubbing of Sheridan.

“I thought we played really well tonight,” head coach Chris Rao said. “I was really happy with where we are at defensively right now. We have to make some progress but we executed our scout well and that’s a good place to be after Game 1. Offensively we are getting better and better at running our stuff and sharing the ball and our assist numbers reflect that.”

Niagara is at St. Clair Saturday and Lambton Sunday.

The Niagara College men’s basketball team dropped a 92-88 decision to Sheridan (2-0) to fall to 1-1 on the season in OCAA action.

“This was a tough loss against a good Sheridan team tonight,” head coach Phil Mosley said. “We need to find more consistency and discipline to close out games. The loss overshadowed a strong performance by Delroy Grandison and Rahim Bardi.”

The Knights are at St. Clair Saturday and Lambton Sunday.

Ranked fourth in Canada, Niagara’s men’s volleyball team pushed its regular season record to 2-0 with 3-0 plucking of the Conestoga Condors.

“Always nice picking up a road win. Those can be hard to come by,” Niagara head coach Steve Stone said. “The boys came out and served tough and it put us in a position to win and I am happy with that result.”

Leading the way for Niagara were: Elijah Bugiardini with 11 points on 10 kills, six digs and one ace; and, Tyler Carmichael with seven points on five kills and two digs.

Niagara plays its home opener Friday at 8 p.m. against the unbeaten Fanshawe Falcons (3-0).

Niagara struggled to gain any consistency through all three sets. 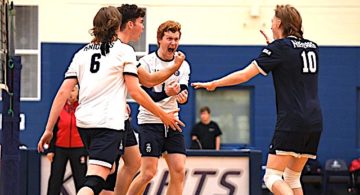