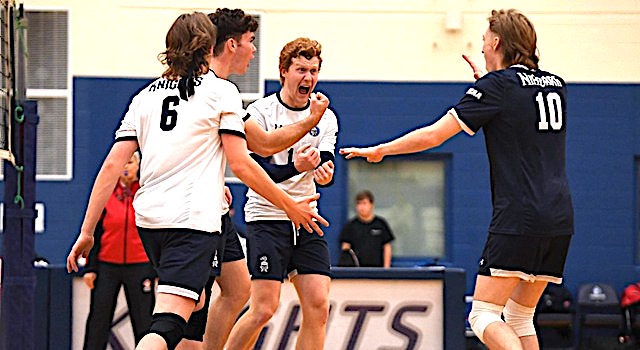 Leading Niagara to the win over the Vipères was Alexis Fothergill with nine aces, seven kills and three digs.

“Alexis worked hard on her serve and it was really cool to see it come to completion today. We wanted to run her all day,” Niagara head coach Tommy Sloan said. “Nine aces is huge. I didn’t even know it was that many. She controlled the net well as well, aggressive on offence, she was closing blocks well, a really all-around great game for her.”

Rachel Bickford added 11 assists, one kill and four digs for Niagara in the win.

“She is our catalyst, our setter and she probably has the best serves in the conference, if not in the country,” Sloan said. “We work with her to be a leader and to control the emotion of the entire court and she has the power to do that. When she is showing positive energy, the rest of our team feeds off that.”

Niagara is a perfect 6-0 in November and Sloan attributes that streak to a number of factors.

“We have won different ways in all six matches. With a bunch of different types of opponents, some days we needed to rely on our left side, relying on our serve to get us through,’ he said. “However today (Sunday) was all about ball control and we played really good defence. It was really nice. Usually you don’t go on that long of a win streak unless you find different ways to win and we have been able to do that.”

Niagara will play its last game before the Christmas break Saturday at St. Clair (6-2).

“Our goal at the end of the season is to medal,” Niagara head coach Steve Stone said after the win. “That would be the end goal and we want to take care of business. In the end though, it is a competitive league, and you have to take care of your side of the net. That’s why you compete. I think we’re more than capable.”

Helping Niagara record the win were Carter Thurman with 29 assists and five digs and Mitch Churipuy with eight kills and 10 digs.

Stone describes Churipuy as the team’s most improved player.

“Mitch was a walk-on at tryouts and the coaching staff knew nothing about him. He showed up and proved to us he was worthwhile taking a chance on and he comes in and works hard every single day, asks questions, takes feedback, and makes the adjustments we ask him to do. We are really happy with his progress and he did really well.”

Top scorers for Niagara against Boréal were Colin Prelaz (11), Zack Reimer (11) and Churipuy (10).

Top performers for Niagara against Cambrian were Elijah Bugiardini with 10 kills and 17 digs and Prelaz with eight kills.

“I thought we came out really strong. I thought our effort level was there. But as Cambrian started to push back, I think we started to just play a little bit small and tentative,” Stone said. “I don’t want to say our guys weren’t trying, they definitely were trying. I am happy for the most part with the effort level, but I do think we need to crank it up coming into a big game like that.”

Sone feels there are a number of areas where his team needs to improve.

“We need to be better in serve. Our serve receive broke down and that’s going to win or lose games.”

The Niagara women’s basketball team (4-3) pushed its winning streak to four games with an impressive 60-25 victory over Mohawk.

Leading the way for Niagara were Taryn Mitchell with 23 points and four rebounds and Jamira Rousseau with five points, 10 rebounds and three blocked shots.

“It (rebounding) is something we’ve been talking about, getting our guards to rebound more but I thought all of our players rebounded well tonight,” Niagara head coach Chris Rao said. “Jamira doesn’t grab 10 rebounds if Kate Roth or Molly Taylor or Eden Ferraro or Angelica Lapensee aren’t (boxing out) people down low. Those numbers reflect us as a team.”

Rao loved how his team communicated on defence.

“The girls executed the plan and talked a ton. We’ve got some really good players on this team and they were able to show why they are good players.”

Niagara’s men’s basketball team (5-3) saw its four-game winning streak come to an end with a 92-90 loss to Mohawk.

The Knights were leading late before the visitors sank a trey with seven seconds left in the game to record the victory.

“That’s not an indication of who we are. We ran into a hot shooting team, we didn’t take good care of the ball at the end when we needed to. That’s just the game of basketball,” Niagara head coach Phil Mosley said.

“It’s about erasing this one, moving forward, and working on the things that got us that four-game winning streak and trying to correct the mistakes,” Mosley said.