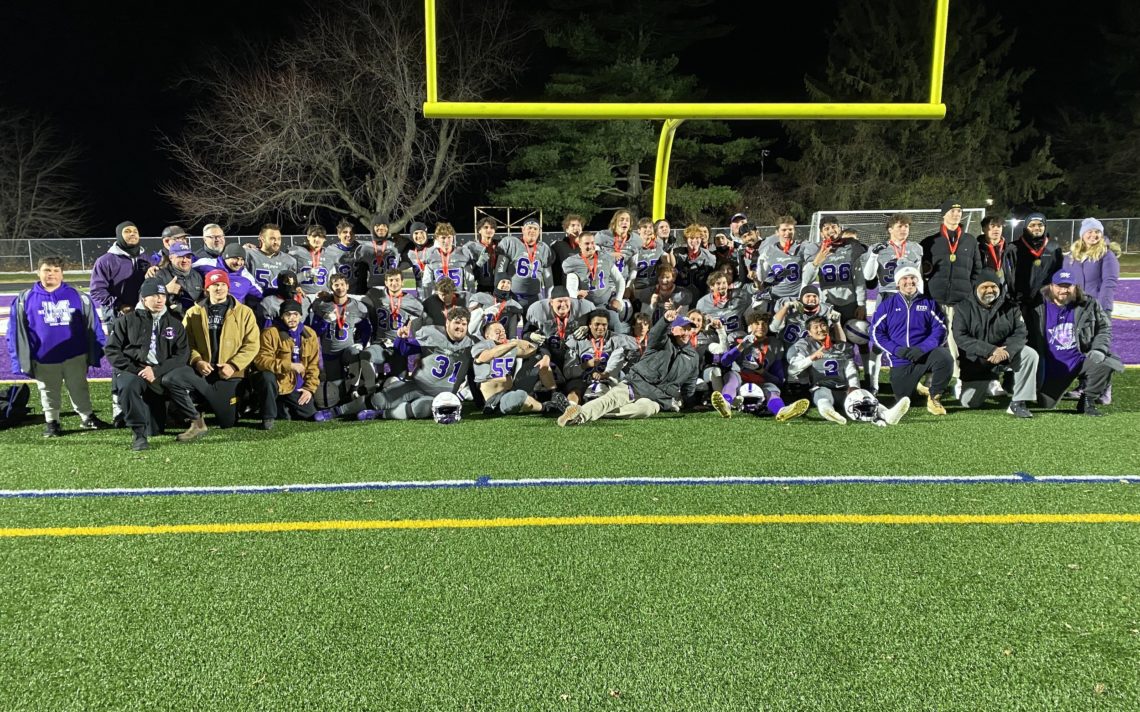 Arden Martinez had plenty of scholarship interest at the end of his Grade 12 season of football with the A.N. Myer Marauders.

The 18-year-old Niagara Falls resident returned for his 12B year and that decision proved to be a great choice for his team. Playing in the Southern Ontario Secondary Schools Association Bowl Tuesday night in Ancaster against the Westmount Wildcats, Martinez had a touchdown catch and an interception to lead his team to a 21-18 victory.

“Physically the next level is so much harder and I wanted to take the time to stay back and build myself up physically but there were a lot of other aspects that I wanted to stay back for too,” the 6-foot-2, 205-pounder said. “I am still figuring things out about why I stayed back.”

The reasons why are many.

“I have a great co-op this year. I am teaching and that is another thing I love doing. I go out and do that every day and then I go back and do another thing I love which is football,” the middle linebacker/halfback said. “I wanted to stay back to win. I knew my team was going to be really strong and I had coached some of these younger kids in Grade 11 way back when I was going into Grade 10. I wanted an opportunity to play with them.

“We have done great things and I am really proud of that.”

Martinez also lost one year of high school football to COVID which also factored into his decision.

A.N. Myer won three straight Ontario Federation of School Athletic Associations bowl games from 2014 to 2016 and Martinez is thrilled he was able to help the program make a return to OFSAA.

“It is really exciting,” he said. “Last year I won defensive MVP and team MVP and I was looking at the names on the MVP list and guys like Tre Ford were on it. To know that they thought I was in the same category as that was amazing and I wanted to come back this year and I wanted to be part of a group that went to OFSAA. They talk about Tre Ford and how good that group was and I want to be remembered as being part of one of those teams that was great as well.”

Martinez had a simple explanation of why this version on the Marauders is heading to OFSAA.

“We all have the same mindset. Last year, we were a group of individuals and this year we are the Marauders. As soon as we stepped on the field, everyone wanted to win OFSSA,” he said. “There was no just beat Notre Dame. We wanted to go all the way.”

“Arden came back this year. He could have went to the University of Waterloo — he already committed last year — and he came back for this reason, for this opportunity. He came back to be with his friends and have this whole experience. You just don’t get this back.”

Buchanan is excited for his entire team.

“This group when we came into the year we definitely knew they worked hard. We had some older players at certain positions that were really important, obviously quarterback,” he said. “But we had a lot of young players so we really weren’t sure whether they could stand up to the bigger, stronger teams like this and they proved they really have. We’ve been in close games and they’ve stuck it out despite our coaching mistakes.”

The Marauders took some gambles against Westmount and they paid off with a big victory.

“What makes it hard is when we’re sitting there watching TV everyone is a critic, I get it. But I have injuries on the sidelines. I have a kid that’s snapping that’s got an ankle injury, I have some guys that are having a little bit of confidence issues when it comes to  punting or whatever,” he said. “You have to measure it and we’ve always been an attack team. I believe in my OC and I believe in my quarterback and my players so sometimes we’ll go for it when it’s not really conventional.”

Up next for Myer is the Golden Horseshoe Bowl against Bishop Tonnos.

“Tomorrow we’re back at it with film. We’ll do what we can to get the film we need on them. We’re back to the grind. That’s what we do well,” Buchanan said. “Every game at this point is tough. It’s 50/50. I respected the heck out of this team. To knock off a team like Notre Dame who we know is fantastic. They had strength, they had size, they had speed. Everything a good team has to have so we’re expecting that with Bishop Tonnos because they’ve knocked off some good teams in their league. Their league is really strong.”

Westmount, which has won fourth straight Hamilton-Wentworth Interscholastic Athletic Council titles, came into the game with an 8-0 record and was looking to win its fifth straight sudden-death game.

“It was tough. It was a very emotional week since last week but the boys played super tough and they played hard,” Westmount head coach Tom Pain said. “It was an excellent team we played — they are undefeated for a reason — and we made some mistakes that hurt us. But full measure to our guys. They battled and some were hurt but they played their hearts out right to the end. I am proud as anything. They are an awesome group of kids.”

The Wildcats were done in by three turnovers and 11 penalties.

“You can’t do those things in a game like this against a really good team,” Pain said. “We kind of shot ourselves in the foot a little bit but we battled back.”

The game was in contrast to last week’s 24-22 SOSSA semifinal win over the Notre Dane Fighting Irish when the Wildcats using their ground game to pound out a victory. On Tuesday, most of the offence came from the passing game.

“They loaded up the box and said they were going to take that away,” he said. “We did play as well up front offensively as we have done all year but again we were playing an excellent team.”

“We definitely could have used a little more offence in the second,” Pain said.

Cat’s Caboose Player of the Game: Myer’s Arden Martinez with a crucial interception and three catches for 33 yards, including a two-yard TD catch

Up next: Myer advances to the OFSAA Golden Horseshoe Bowl Tuesday at 5 p.m. against Bishop Tonnos at the University of Guelph.

Editor’s note: BPSN would like to thank John Metcalfe for his statistical help.